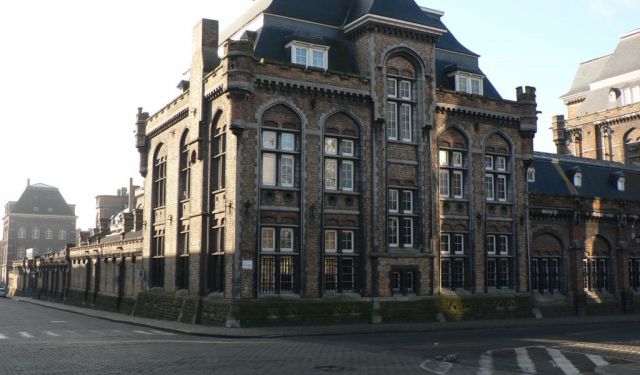 Image by Gent on Wikimedia under Creative Commons License.

Ghent is a city with many attractions. There are exceptionally interesting things to see even outside of the city center. The south section of Ghent boasts some fabulous architectural sights, such as the Book Tower and an old religious complex. There are also some museums that are definitely worth a visit. Take this self-guided tour to explore the best South Ghent has to offer.
How it works: Download the app "GPSmyCity: Walks in 1K+ Cities" from iTunes App Store or Google Play to your mobile phone or tablet. The app turns your mobile device into a personal tour guide and its built-in GPS navigation functions guide you from one tour stop to next. The app works offline, so no data plan is needed when traveling abroad.

"Béguinages" used to be architectural complexes built to house beguines: lay religious women who lived in a community without taking vows or retiring from the world. This community of beguines is perhaps the most beautiful of the three in Ghent, and also the best of all the ones in Belgium. It dates back to 1235 and consists of several churches and chapels built in the Baroque style with beautiful facades. The churches were rebuilt in the 17th century. The complex has been recognized as a UNESCO World Heritage Site. Even the exteriors have a couple of frescoes which have been protected with a small ceiling and frontage. One thing that intrigues is that certain windows are actually walls that were painted to make them look like windows.

Why You Should Visit:
Quiet, relaxing, and romantic place in the heart of Ghent that has recently seen a tasteful renovation.
People do live here, so it's not a museum, but it has a very nice atmosphere, away from the busy city.

Tip:
One of the best places for classical concerts thanks to the excellent acoustics and the peace outside.


Image by Michiel Hendryckx on Wikimedia under Creative Commons License.
2

The Book Tower is designed by the Belgian architect Henry Van de Velde. It is part of the Ghent University Library and currently houses about 3 million books. The Boekentoren is directly adjacent to the Blandijn, the buildings of the Faculty of Letters and Philosophy. Although the tower is only 64 metres high, it makes a huge impression as it is located on the highest point of the city called de Blandijnberg. Van de Velde designed it in 1933 to be the fourth tower of the city completing the famous three towers of the Middle Ages: the Saint-Nicolas Church, the Belfry and the Saint Bavo Cathedral.

During the Second World War the tower was taken by the German army because of the great city view they had over there.
Image by MADe on Wikimedia under Creative Commons License.
Sight description based on wikipedia
3

De Bijloke Concert Hall is a remarkable historic building. Built in the 13th century, it used to be a large, medieval hospital. Today it is a modern concert hall. The most notable feature of this site is the spectacular oak ceiling with its distinguished medieval craftsmanship.
Image by Amaury Henderick on Flickr under Creative Commons License.
4

The City Museum of Ghent, otherwise known as STAM, exposes the city history and opened its doors in 2010. Among other things here you will learn about the ancient Bijloke Abbey on the grounds of which the museum is situated. The permanent exhibition titled "The Story of Ghent" charts major milestones of the city's development throughout centuries, starting from modern Ghent on the first floor to the medieval period, featuring the "chastened city" of 1600-1800, the "industrial city" of 1800-1950 and ultimately the "network city" from 1950 to the present day.

Eyecatching parts of the museum are the sky picture of Ghent (300 m² large) on which the visitors can walk around, and software with which Ghent can be viewed in detail and over the course of four centuries. "Views on Ghent" is another multimedia application: a screen shows a city view from the year 1534, floor-plans from 1614 and 1912 and a sky picture from the present. There is also a room for temporary exhibitions.

Why You Should Visit:
The displays, organization, items, and flow through the rooms and the history of Ghent are so well done – no wonder this won the 2012 Flemish Museum Prize.

Tip:
It is well worth supplementing the info boards with the free audio guides, as some of the panels are in Flemish only.
Also, notice the benches in the corridors. Lean back and press the English button on the seats for more commentary.

Leopold Kazerne, translated as the Leopold Barracks, is a military complex. The buildings were constructed between 1890 and 1905 in an eclectic style. The complex occupies more than 2 hectares and originally had about 1,300 military barracks. During WWI the barracks were occupied by German troops.
Image by Gent on Wikimedia under Creative Commons License.
6

This park carries the name of a huge citadel built on its site after the defeat of Napoleon. Eventually, the citadel had to be moved, giving way to the park laid out for the 1913 World Exhibition. Today, Citadel Park boasts botanical richness, featuring a plethora of special trees, each marked with a name-plate installed in 2005. The park attracts crowds of tourists with its beautiful trees, numerous statues, and two museums. There is also a cycling track and the Congress Center.

Tip:
Any local would tell you to visit the park; just as they would also tell you to stay away from it at night (roughly from sunset to sunrise).
As relaxing, beautiful and safe as it is during the day, this park has something of a negative after-hours reputation.
Image by PMRMaeyaert on Wikimedia under Creative Commons License.
7

Located nearby the famous Citadel Park, the University of Ghent's Botanical Garden houses over 10,000 different varieties of plants from around the world, which are arranged into thematic collections. They blossom at different times of the year, so it doesn't matter when you visit, as it is always beautiful. Especially gorgeous are the big waterlilies that will immediately catch your attention.

Why You Should Visit:
Ideal place to relax, enjoy silence and nature... feels like Indonesia!

Tip:
Spring is the best time to visit, as you will see flowers blooming left and right.
The greenhouses (tropical, subtropical, and Victorian) are even more gorgeous.
There are lots of guided tours – including at night, during the Ghent Festival in July. Head online to book!

Ghent-Sint-Pieters is the main railway station in Ghent and – depending upon the measure used – the second or third busiest railway station in Belgium. The origins of the railway station is a small station on the line Ghent-Ostend in 1881. At that time the main railway station of Ghent was the South railway station built in 1837. On the occasion of the 1913 World Exhibition in Ghent, a new Sint-Pieters railway station was built. It was designed by architect Louis Cloquet and finished in 1912 just before the World Exhibition. The station is built in an eclectic style with a long corridor dividing the building lengthwise which provides access to diverse facilities. In 2007, the tower at the entrance of the station underwent renovation. In 2008 a new glass canopy was placed at the main entrance. In 2010, the murals of the main entrance hall were renovated.
Image by MADe on Wikimedia under Creative Commons License.
Sight description based on wikipedia

Ghent is a city full of 15th-century architectural monuments. Medieval buildings are everywhere, and these old buildings contribute to Ghent's fairy tale cityscape, especially along the channel and in the squares. Take this self-guided tour to see some medieval architectural gems in Ghent.