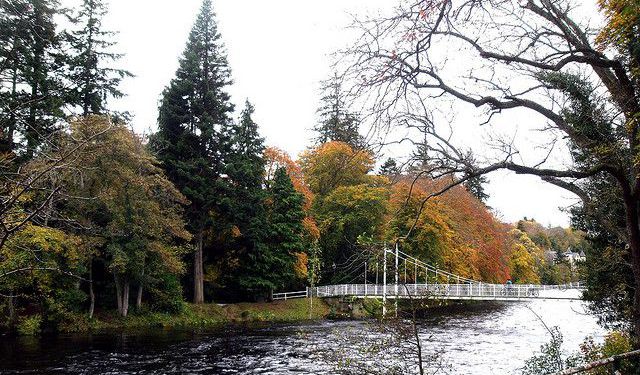 Southwest Inverness boasts a number of prominent attractions, including Ness Bank Church, Inverness War Memorial, Eden Court Theater, Bught Park, Tomnahurich Cemetery, Inverness Floral Hall, Whin Park, and the Ness Islands. Take this tour to discover this fascinating area of Inverness.
How it works: Download the app "GPSmyCity: Walks in 1K+ Cities" from iTunes App Store or Google Play to your mobile phone or tablet. The app turns your mobile device into a personal tour guide and its built-in GPS navigation functions guide you from one tour stop to next. The app works offline, so no data plan is needed when traveling abroad.

Ness Bank Church is located on Ness Bank Street in the southern part of Inverness. The church was built at the beginning of the 20th century by William Mackintosh in the early Gothic Revival style. The original congregation, founded in 1787, belonged to the United Free Church. Sunday morning services begin at 11:00 A.M.
Image by conner395 on Flickr under Creative Commons License.
2

The Inverness War Memorial is located in Cavell Gardens on the right bank of the Ness River. This memorial is dedicated to all residents of Inverness who left their homes during the two World Wars to fight for their country. The memorial is a red sandstone Celtic cross, which was designed by John Hinton Gall.
Image by conner395 on Flickr under Creative Commons License.
3

Image by yellow book on Flickr under Creative Commons License.
Sight description based on wikipedia
4

Bught Park is the largest park in the city of Inverness and is situated on the western bank of the River Ness. It is home to the Inverness Highland Games and a small scale outdoor music festival. It is located next to the city's sports centre, swimming pool and BMX track. The Bught Park is also the name for the sports stadium situated within the confines of the park which regularly hosts both the Camanachd Cup Final and the Composite Rules Shinty/Hurling Internationals and is considered one of the finest parks in shinty. It is also home to Inverness Shinty Club who have played there since the 1920s.

The capacity of the stadium is 5000, comprising standing and the wooden grandstand. The stadium was the centre of controversy in June 2009 when Highland Council, having evicted Inverness City F.C. from the Northern Meeting Park offered the use of the facility to the football team without consulting with the shinty club.

Image by conner395 on Flickr under Creative Commons License.
Sight description based on wikipedia
5

The Ness Islands are situated on the River Ness, opposite the Bught Park, in the city of Inverness. The first bridges to the islands were built in 1828, prior to their construction the only access to the islands was by boat. The original bridges were washed away in the flood of 1849 and were replaced in 1853-1854 by two suspension bridges designed by William Dredge. The Islands are a natural beauty spot and a popular walk with tourists and locals alike, as the islands are home to a number of imported species of trees and home to wildlife such as bats and otters and occasionally deer. The area includes play facilities for children, and the Ness Islands miniature railway.
Image by conner395 on Flickr under Creative Commons License.
Sight description based on wikipedia
6

Whin Park is located near Inverness Floral Hall. It is a pleasant park that has a small lake. Enjoy the picturesque views from the shore or take a short trip on a boat. For children, the park has a playground and a miniature railway.
Image by conner395 on Flickr under Creative Commons License.
7

Opened in 1993 by Prince Edward, Inverness Floral Hall is a unique attraction where you can walk on winding pathways and admire the subtropical plants, beautiful flowers, exotic trees, shrubs, heathers and herbs. The hall features a grotto, waterfall, fountain and tropical fish pond that has a variety of Koi Carp. If you get hungry or thirsty after your walk, you can enjoy a snack at the coffee house located on the premises.
Image by brockvicky on Flickr under Creative Commons License.
8

Tomnahurich, meaning "hill of the yew trees" or "hill of the fairies", is a huge cemetery situated on Tomnahurich Hill, southwest of the town center. According to legend, the 13th-century seer Thomas the Rhymer is buried here together with his men and horses and is ready to rise again to save Scotland should his country need him. This cemetery is the final resting place for a number of notable Scots. Many fine statues and figures dot the grounds. At the highest point of the hill is an impressive War Memorial. The view alone makes the cemetery worth a visit!
Image by conner395 on Flickr under Creative Commons License.