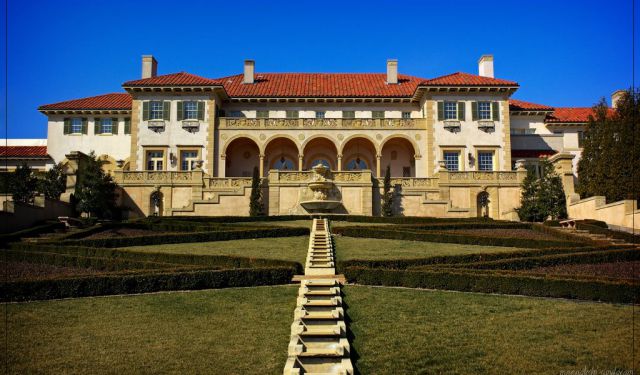 Image by meenatcisundaram on Flickr under Creative Commons License.

Tulsa is home to numerous Art Deco buildings, parks, museums, and other exciting attractions. From a picnic in Centennial Park to a visit to the museum, there are plenty of fun, engaging things to do in Tulsa! Take this self-guided tour to visit the best attractions in Tulsa's Midtown.
How it works: Download the app "GPSmyCity: Walks in 1K+ Cities" from iTunes App Store or Google Play to your mobile phone or tablet. The app turns your mobile device into a personal tour guide and its built-in GPS navigation functions guide you from one tour stop to next. The app works offline, so no data plan is needed when traveling abroad.

1) Philbrook Museum of Art (must see)

The Philbrook Museum of Art is an art museum housed in part in a 1920’s villa, situated on 23 acres of formal and informal gardens. The original structure is the former home of Oklahoma oil pioneer Waite Phillips and his wife Genevieve (Elliott) Phillips. The museum opened in 1939.

Philbrook Museum of Art houses exhibitions from around the world. The permanent collection encompasses European, American, Native American, Modern and Contemporary Art and Design, African, Asian and Antiquities. The museum serves an average of 149,000 visitors annually.

The museum's permanent art collection began with a few works of art from the Tulsa Art Association and Villa Philbrook. They grew steadily with gifts of American Indian pottery and basketry from Clark Field beginning in 1942 and the Roberta Campbell Lawson collection in 1947. The American and European collection received a boost from Laura A. Club who donated paintings in 1947 and from Italian Renaissance paintings and sculptures from the Samuel H. Kress Foundation in 1961.

Image by whiterabbitart on Flickr under Creative Commons License.
Sight description based on wikipedia
2

Situated in Tulsa's Woodward Park neighborhood, the Garden Center is one of the jewels of Tulsa. The center offers splendid views and has a stunning rose garden. There is an exhibition that features historical photographs of the house located on the Garden Center grounds. Built in 1919, the Italian Renaissance mansion has numerous rooms that are open for private parties, meetings, and weddings. The center also hosts classes, programs, and gardening presentations. It is open Tuesday to Saturday from 9:00 a.m. to 4:00 p.m.
Image by Angela K. Severn on Flickr under Creative Commons License.
3

J. Spencer Jewelry & Gifts sells exclusive, handmade jewelry. The owner designs and creates his silver and semi-precious stone jewelry at the store's central location in Utica Square. The store is a direct importer of high-quality silver jewelry and features many wonderful brands, in addition to J. Spencer original designs. You can count on receiving sincere advice here on how to find jewelry to meet your specific needs. The selection of jewelry is exclusive and ever-changing, so you can always find both classic styles and the latest designs. The store is open Monday to Saturday from 10 a.m. to 6:00 p.m.
Image by Deidre Woollard on Flickr under Creative Commons License.
4

Swan Lake is a historic district in Tulsa. Its borders consist of 15th Street to the North, Utica Street to the East, 21st Street to the South, and Peoria Avenue to the west. It was the site of an amusement park in the early Twentieth Century, but is now notable for the number and architectural variety of houses and apartment buildings constructed in the 1920s and 1930s. In 2011, the American Planning Association named Swan Lake as a Top Ten Great Neighborhood.

The neighborhood of Swan lake was designed and laid out in a smaller than normal street grid system. This design identified from the beginning a desire for an enhance focus on pedestrian traffic and an indirect focus on neighborly community interaction.
Image by Daniel Jeffries on Flickr under Creative Commons License.
Sight description based on wikipedia
5

Built in 1926, Christ the King Church is representative of the Art Deco architectural style, like many other buildings in Tulsa. The church also features Byzantine elements, such as stained glass windows depicting Christian saints and exquisite mosaics. When you walk inside the church, take note of the interesting shape of the sanctuary, as well as the huge limestone altar and wooden ceiling.
Image by Johns Never Home on Flickr under Creative Commons License.
6

Built in 1907 by S. Morris, St. Paul's Methodist Church was originally built of planks, blocks, stumps and rocks. Located on Quaker Street, it is a neighborhood church, small enough so that everyone in the congregation knows one another, but large enough to make a difference in the community. The current edifice was constructed in 1920 and completed in 1924. The new chapel was formally dedicated in January 1925. With its splendid stained glass and its red brick Gothic architecture, the church serves as a prominent city landmark.
Image by Daniel Jeffries on Flickr under Creative Commons License.
7

Opened in 1986, Pierson Gallery moved to its current location in 2004. The gallery features paintings and prints by well-known artist C. Wilson. It also displays paintings, ceramics, sculptures and pottery by artists from across the country. Attached to the gallery is a shop that sells carved wood, gold and silver items.
Image by Le Petit Poulailler on Flickr under Creative Commons License.
8

The Chalkboard is a famous Tulsa landmark located in the lower level of the Ambassador Hotel. Founded in 1970 and renovated in 1999, the interior of this popular cafe has changed greatly over the years, yet visitors continue to love it. The Chalkboard offers excellent food and a European-style atmosphere. It boasts the best culinary team in the city and has won the prize for the best restaurant in Tulsa.
Image by Angela Horn on Flickr under Creative Commons License.
9

The Tulsa Fire Alarm Building is a historic Art Deco building. It was built in 1931 and served as the central reporting station for the Tulsa Fire Department. Fires were reported from alarm boxes spread around town to this building and the firemen would alert the fire station closest to the fire. At the time of its construction this system was the best available alarm system.

The building was designed by architect Frederick V. Kershner and inspired by Mayan temple design.

It was used by the Fire department until 1984. It was left vacant and fell into disrepair. In 1994, it was purchased by Martin Newman, chairman of the Tulsa Preservation Commission. In 2000, The American Lung Association of Oklahoma purchased the building as its new headquarters. After a $5 million fund-raising campaign, the renovation of the building was completed in 2005. The building was listed on the National Register of Historic Places in 2003.
Image by David Stapleton on Wikimedia under Creative Commons License.
Sight description based on wikipedia
10

Situated west of Peoria, Centennial Park offers an exciting view of downtown Tulsa. The park features green areas, numerous benches and beautiful stone walls. For those who love to stroll at night, this park is the perfect place, because the paths are all illuminated. The park is rich in fauna and is home to birds, rabbits, turtles and swans. It also has picnic tables, fountains, waterfalls, and a playground.
Image by Greg Lytle on Flickr under Creative Commons License.