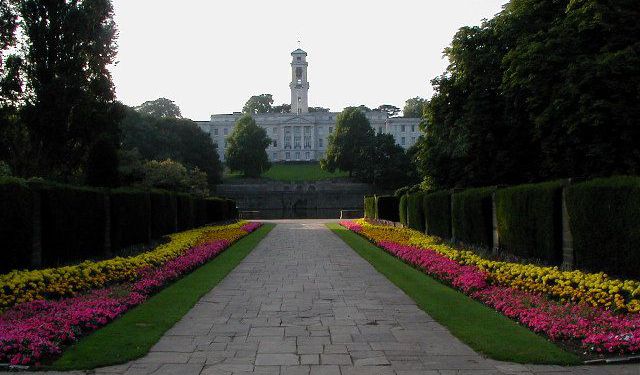 Image by Peter Shone on Wikimedia under Creative Commons License.

Nottingham is bursting with unique things to see. Notable attractions in the western part of the city include Wollaton Hall and the University of Nottingham. Take this off-the-beaten-path tour to check out other interesting places hidden in western Nottingham.
How it works: Download the app "GPSmyCity: Walks in 1K+ Cities" from iTunes App Store or Google Play to your mobile phone or tablet. The app turns your mobile device into a personal tour guide and its built-in GPS navigation functions guide you from one tour stop to next. The app works offline, so no data plan is needed when traveling abroad.

The Rose & Crown is a traditional pub located near the University of Nottingham that is very popular with students. The pub features a sports area and a pool table and offers a wide selection of beer at reasonable prices. The staff is welcoming and professional.
Image by Lambert under Creative Commons License.
2

The Old Gatehouse, which resembles a castle, is an entrance to Wollaton Park. This noted city landmark still has a mechanism that allows the gate to open. The gate has a massive arch and four turrets and was built in the Romanesque style. It is considered the most complex Romanesque structure to have ever been built in England.
Image by mattbuck4950 on Flickr under Creative Commons License.
3

St. Mary's Church is a small Anglican parish located near Wollaton Park. It was designed by architect Thomas Cecil Howitt and was founded in 1939. The interior of the church features an organ built by J. W. Walker & Sons Ltd. in 1938.
Image by Andrewrabbott on Wikimedia under Creative Commons License.
4

The University of Nottingham received its Royal Charter in 1948, but its predecessor institution, University College Nottingham, was founded in 1881. With campuses in China and Malaysia, the Times regards Nottingham as Britain's "only truly global university". With more than 49,000 applications for 5,500 places in 2012, Nottingham is the most popular university in the UK. It is widely regarded as a "prime alternative to Oxbridge". It consistently ranks among the top ten in the UK in the most important world and national rankings and is known for its Law, Economics, Pharmacy, and Medicine courses, of which entry are among the most competitive in the UK.

In the past decade Nottingham produced two Nobel laureates, in the fields of Medicine and Economics. It is the alma mater of novelist D.H. Lawrence, current Prime Minister of Malaysia, Najib Razak and CEO of pharmaceutical conglomerate GlaxoSmithKline, Andrew Witty.

University Park Campus, to the west of Nottingham city center, is the 330-acre (1.3 km2) historic home of The University of Nottingham. Set around its famous lake and clock-tower and with extensive parkland greenery, the campus is widely regarded as the most attractive in the country. University Park has won numerous awards for its architecture and landscaping, and has been named the greenest campus in the country thanks to a new Green Flag Award.

Image by Barry Mangham on Wikimedia under Creative Commons License.
Sight description based on wikipedia
5

Wollaton Hall is a country house standing on a small but prominent hill in Wollaton. Wollaton Park is the area of parkland that the stately house stands in. The house itself is a natural history museum, with other museums in the out-buildings. Wollaton Hall was built between 1580 and 1588 for Sir Francis Willoughby and is believed to be designed by the Elizabethan architect, Robert Smythson, who was the architect of Hardwick Hall. The style is Elizabethan with early Jacobean elements. The building consists of a high central hall, surrounded by four towers. Unfortunately, a fire caused damage to Smythson's interior decoration of some of the ground floor rooms, but little structural damage occurred. Remodeling was carried out by Wyattville in 1801 and continued intermittently until the 1830s.

The gallery of the main hall contains Nottinghamshire's oldest pipe organ, thought to date from the end of the seventeenth century, possibly by the builder Gerard Smith. It is still blown by hand. Paintings on the ceilings and one wall are attributed to Verrio or his assistant Laguerre. Directly over the main hall is a 'prospect room', from which there are extensive views of the Park. Beneath the hall are many cellars and passages, and a well and associated reservoir tank, in which some accounts report that an admiral of the Willoughby family took a daily bath.

Image by ☺ Lee J Haywood on Flickr under Creative Commons License.
Sight description based on wikipedia
6

Camellia House is considered the oldest cast iron building in the U.K. It is located in Wollaton Park near Wollaton Hall. This wonderful house was built from 1580 to 1588 by Sir Francis Willoughby and was designed in the Medieval and Renaissance architectural styles. The glazed walls are separated by Doric columns; the roof is glazed also. The interior of the structure is divided by paths and columns on each side.
Image by swimboy1 on Flickr under Creative Commons License.
7

Nottingham Industrial Museum is situated in Wollaton Hall area, neighboring with Natural History Museum, Yard Gallery and Deer Park. The Collection was very poor till 1960 exposing the history of industrial material. After 1960 was established a larger collection of local textile, cool mining and light metal. Now the collection is combined from transportation gallery, lace machinery, telecommunication, agricultural machinery and steam engines. The museum is opened on Saturday and Sunday from 11:00 am to 4:00 pm.
Image by johnb/uk on Flickr under Creative Commons License.
8

St. Leonard Church is located on Lincoln Road and is a Grade II-listed landmark. The church dates back to the 13th century, making it one of the oldest churches in Nottingham. It features a spectacular design and stained glass windows. The church has a welcoming congregation that gathers on Sundays to worship.
Image by ☺ Lee J Haywood on Flickr under Creative Commons License.
9

The Wheelhouse is a pub located near Wollaton Park. It offers a fine selection of spirits, wine, and beer and has an extensive menu. It is a popular place with locals. The pub organizes a variety of events such as quizzes and live entertainment. The prices are reasonable, and the venue itself is cozy and comfortable.
Image by spli on Flickr under Creative Commons License.