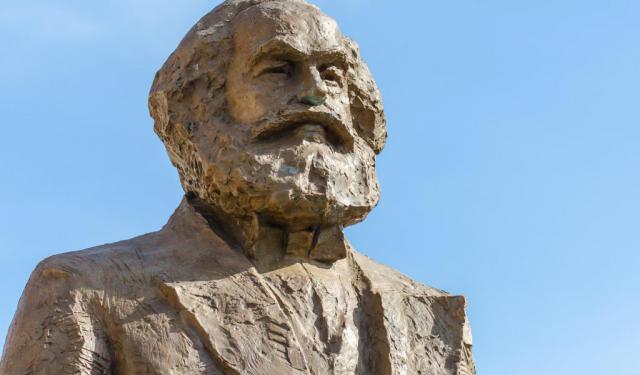 Image by W. Bulach on Wikimedia under Creative Commons License.

Trier is a settlement that has a history dating back to ancient times. It is very famous for being the capital of a Roman province during the Roman Empire. The long history of the city made Trier one of the most beautiful cities in Germany from an architectural point of view. Trier has numerous beautiful architectural buildings that feature various architectural styles and eras. Take the guided walk to see some of the beautiful architecture in Trier.
How it works: Download the app "GPSmyCity: Walks in 1K+ Cities" from iTunes App Store or Google Play to your mobile phone or tablet. The app turns your mobile device into a personal tour guide and its built-in GPS navigation functions guide you from one tour stop to next. The app works offline, so no data plan is needed when traveling abroad.

Martinskloster is a very beautiful building that long ago belonged to a Benedictine monastery that stood here. Religious buildings were starting to be built on the spot starting with visits of the Abbot Martin of Tours. During those years, a church and a monastery (that later became a Benedictine monastery) were built. In 1812, the monastery and other buildings of the neighborhood were demolished and only this building was saved. The Martinskloster has been renovated and is a student residence since 1872.
Image by Berthold Werner on Wikimedia under Creative Commons License.
2

St. Paulus Church was built in the 13th century. During World War II, it was destroyed and later renovated. The church is built in a mix of Romanesque and Gothic styles. The church is also famous for housing a 16th century, old astronomical clock. It has some very interesting drawings on it and it plays a song every day at noon.
Image by Stefan Kühn on Wikimedia under Creative Commons License.
3

Frankenturm (or Franken Tower) is an old defense tower that was built in the 11th century. It was used to shield the Trier inhabitants during attacks. Over the years, the Frankenturm was renovated several times and was once the residence of an archbishop. The last renovation occurred in 2006. Now it is open as a cultural building. It was believed that Trier had several towers of this nature, but only two of them are left standing, including the Frankenturm.
Image by Berthold Werner on Wikimedia under Creative Commons License.
4

The Steipe und Rotes Houses are very popular and important building for Trier and they are located on the Main Market of the city. The Steipe house was built in 1430 and since was the City Hall. During the II World War the building was destroyed, but renovated in 1970. The Rotes house was built later by Wolfgang Struppeler. The structures have a very beautiful and special architecture, and they are decorated with amazing bás-relieves and sculptures made by some famous local artists. The buildings house the Toy Museum.
Image by Berthold Werner on Wikimedia under Creative Commons License.
5

Dreikönigenhaus (or Epiphany House) is a very beautiful structure built in an early Gothic style. The name of the building comes from the fact that earlier in this house there was a painting of the Epiphany. It was built in 13th century and later was restored several times.
Image by Berthold Werner on Wikimedia under Creative Commons License.
6

Turm Jerusalem is a very old building, probably built in 11th century. It was part of the Palais Walderdorff complex and served as a residence. During ages it was many times renovated and changed. It is believed that originally, the Turm Jerusalem was higher. The structure was made of the Roman building material. Today the tower is used as a registry office.
Image by Berthold Werner on Wikimedia under Creative Commons License.
7

Walderdorff is an amazing and very popular place. It is located within a 19th century palace right in the heart of Trier. The place has a nice café, a great restaurant with a famous wine bar and at night it is the hottest nightclub in the city. The events are different every night and the place can be transformed into a dance floor with DJs or live music. The atmosphere at Walderoff is fantastic.
Image by Stefan Kühn on Wikimedia under Creative Commons License.
8

Rokoko-Palais der Kurfursten or the Electoral Palace is an outstanding building. It was built in 17th century on the base of the Basilica of Constantine. The structure has a Renaissance and Rococo architectural style. It was the residence of the Trier Electors or Archbishops. Later the structure was used as barracks during Napoleon times and later. At present, the building is used by some agencies. In front of the Palace there is a beautiful garden dating from the 20th century and it is open to the public. The garden has a number of some very beautiful sculptures.
Image by Stefan Kühn on Wikimedia under Creative Commons License.
9

Hochbunker is a specific German building made with the purpose to protect civilians during the air rides of the II World War. The structures usually were made of concrete. The walls were about 1 m and 1.5 m thick. After the war, to demolish this kind of building was so expensive that it was cheaper to transform their destinations. The building is not open for the public, but it is a very interesting piece of architecture.
Image by Stefan Kühn on Wikimedia under Creative Commons License.
10

Heiligkreuzkapelle or the Chapel of the Holy Cross was built in the 11th century where the walls of ancient Roman settlements stood. It was built in the shape of a Greek cross and it has a tower in its centre. The chapel is very beautiful. It was restored several times since its foundation, especially after the second World War. It bears traces of Trier Anthroposophical architecture.
Image by Stefan Kühn on Wikimedia under Creative Commons License.
11

St. Matthias' Abbey is a Benedictine monastery in Trier.

The abbey church, a Romanesque basilica, is a renowned place of pilgrimage because of the tomb of Saint Matthias the Apostle, after whom the abbey is named, located here since the 12th century, and the only burial of an apostle in Germany and north of the Alps. The abbey was originally named after Saint Eucharius, first Bishop of Trier, whose tomb is in the crypt. The church has been given the status of a basilica minor.

Monks have lived in the present St. Matthias' Abbey since late antiquity. The monastery adopted the Rule of St. Benedict in about 977.

St. Matthias' Basilica, which was dedicated on 13 January 1148, combines four functions. It is the parish church of the parish of the same name; the monastic church of the Benedictine community; a pilgrimage church centred on the tomb of Saint Matthias the Apostle; and the burial church of the first bishops of Trier, Eucharius und Valerius.

Image by Berthold Werner on Wikimedia under Creative Commons License.
Sight description based on wikipedia