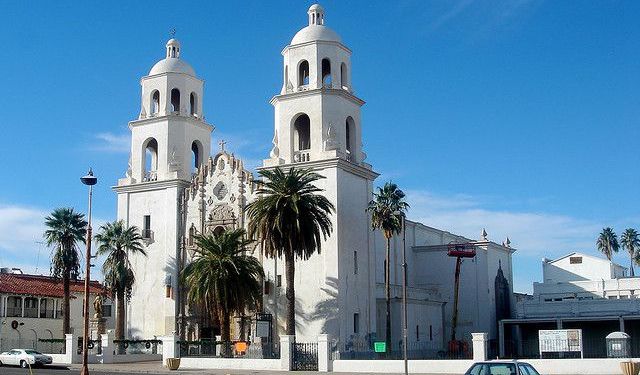 Image by Venturist on Flickr under Creative Commons License.

Tucson boasts an array of religious buildings of different denominations, starting with Jewish religion right up to Christian Orthodox. You will be amazed by their architectural beauty and design. In this self-guided tour you will visit the most astounding and famous religious places.
How it works: Download the app "GPSmyCity: Walks in 1K+ Cities" from iTunes App Store or Google Play to your mobile phone or tablet. The app turns your mobile device into a personal tour guide and its built-in GPS navigation functions guide you from one tour stop to next. The app works offline, so no data plan is needed when traveling abroad.

Grace St. Paul's Episcopal Church is a congregational church located on E. Adams Street. Visitors gather for worship in a large, beautiful building. The church sometimes organizes coffee hours where everyone is welcome. They also offer a variety of worship styles from traditional Rite II worship to contemplative liturgy. The parish has different programs for adults, children and youth, as well as healing ministries and social action and service. Here you will find out how ordinary Americans worship and maybe discover the truth about yourself and the outer world.
Image by Olga Yiparaki on Flickr under Creative Commons License.
2

Catalina United Methodist Church is a congregational church located in the center of Tucson. It was established on April 16, 1922 by a group of Christians. It is housed in a majestic white building with a beautiful design and a green lawn in front of the building. The members of this parish come here to worship God and spend time together in prayer. The church has a children's choir and adults' music groups as well as Sunday School. They also organize concerts and sermons for adults, youth and children.
Image by TV19 - DD Meighen on Flickr under Creative Commons License.
3

Benedictine Monastery is situated in the center of the city of Tucson near the campus of the University of Arizona. It was established in 1935. This beautiful, pink church was built in Spanish Renaissance style. It features tile roof and arched porch. On the territory of the monastery there is an orchard of oranges and lemons and 'Zen' cactus garden. For many years the monastery has helped the needy, fed the poor and offered assistance to refugees.
Image by © Diana Yakowitz, 2009 on Flickr under Creative Commons License.
4

Congregation Young Israel of Tucson has the goal to maintain the fundamentals of Orthodox Judaism throughout the world. They have created the center for traditional ideas. Many people gather for Torah lessons, which are conducted by Rabbi Yossie Shemtov. The doors of the Congregation Young Israel of Tucson are open all year round for everyone.
Image by zeevveez on Flickr under Creative Commons License.
5

Temple Emanu-El is a Reform synagogue. It was the first synagogue in the Arizona Territory and is the oldest congregation in the state; Emanuel's original building, known as the Stone Avenue Temple, is the oldest synagogue building in Arizona.

Emanu-El's original building, the Stone Avenue Temple was a brick structure designed by architect Ely Blount. Blount blended a pedimented, pilastered Greek revival facade with rounded windows and twin towers in Rundbogenstil style. In 1937 the building was covered with stucco. The original stained-glass windows have been lost. Since 1982, the building is listed in on the National Register of Historic Places as part of the Barrio Libre Historic District. It currently houses the Jewish Heritage Center of the Southwest.

Image by Lawrie Cate on Flickr under Creative Commons License.
Sight description based on wikipedia
6

Country Club Road Church of Christ was opened in 1954 by Joseph Colquitt and a group of Christians. Later on church members became more numerous. The church has several ministries. They organize youth activities, children classes and child care. Its members meet in a beautiful building on 145 N. Country Club Road.
Image by fradaveccs on Flickr under Creative Commons License.
7

First Assembly of God is a congregational church situated in the heart of Tucson. Its members are cordial and friendly people who meet every Sunday for a sacred service. The church is built of red brick with arched windows and features a beautiful design.
Image by Steve Snodgrass on Flickr under Creative Commons License.
8

This Orthodox Church is small and relatively new. It was named after Chiefs of the Apostles Peter and Paul and was established in 1997 by Father John Bockman. The church is situated on the north side of Broadway. The church has a bookstore and a Gift Shop, where you can buy everything from icon ornaments to jewelry and unique gift items.
Image by Saints Peter and Paul Orthodox Church under Creative Commons License.

Tucson is well known for its diverse range of museums that demonstrate the richness of this area. The following guide will help you to learn more about the culture, art, science and technology of Tucson and of the state of Arizona in general.

A great city will offer great pleasures. The pleasure of art is one of the finest in the world and a tour to the city galleries will give you an insight to the art of this area of the world. The proposed galleries are a selection of the greatest in the city. Make sure you enjoy the tour and maybe get something for yourself.

Tucson boasts a variety of structures with a great design and the finest architecture. Walking down the streets you can admire different architectural styles in the buildings, such as Spanish Colonial style, Moorish style and others. Take this tour to get acquainted with Tucson's refined architecture.