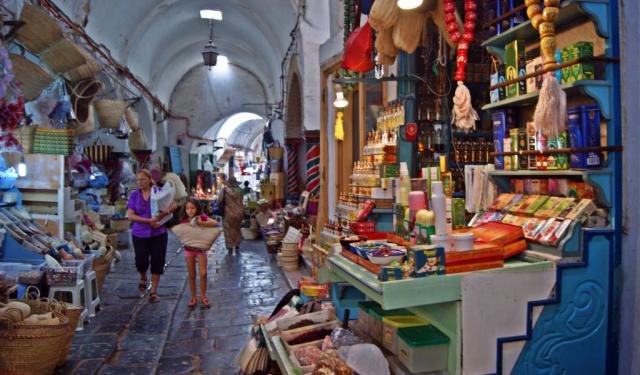 Image by Moumou82 on Wikimedia under Creative Commons License.

Shopping in Tunis is certainly an art. Outside official shops, it contains various souks, which offer a rich selection of handicrafts of incomparable beauty, traditional Tunisian clothes, original souvenirs, excellent works of art and crafts. Don’t be afraid of the inflated prices. Bargain and act disinterested and you will get an excellent deal. All this makes shopping more fun!
How it works: Download the app "GPSmyCity: Walks in 1K+ Cities" from iTunes App Store or Google Play to your mobile phone or tablet. The app turns your mobile device into a personal tour guide and its built-in GPS navigation functions guide you from one tour stop to next. The app works offline, so no data plan is needed when traveling abroad.

This shop offers a large assortment of handicrafts with fixed prices, which is rare in Tunis. The beautiful handmade works at this outlet are produced by rural women's cooperatives. You will find rugs, original kilims, woven carpets with geometric designs and beautifully embroidered blankets.
Image by dearbarbie / 金娜 Kim S on Wikimedia under Creative Commons License.
2

Rue Jemaa Zitouna is one of the most important shopping streets in Tunis and begins at Place de la Victoire, where the Old Medina meets the Ville Nouvelle. From here this street leads deep into the Medina’s heart, where you will find various souks, dating back to the Hafside times. They offer perfume extracts, henna, wedding cases, handcrafted Tunisian fabrics, materials, Tunisian carpets, traditional clothes, beautiful jewelry and great souvenirs.
Image by matthew Hunt on Wikimedia under Creative Commons License.
3

3) Souks of the Medina of Tunis

Balgha is a heelless slipper made from leather. Tunisian Balgha is a fine blend of tradition, authenticity and modernity.

Manufacturing of these fine Tunisian hand-made slippers has barely changed since centuries. They are made the same way ancient handcrafters used to make them.

These slippers are made from natural leather in the pure tradition of the Tunisian leather craft. Leather is naturally tanned with environmental friendly materials.

It is part of a traditional dress in Tunisia but the demand for the Balgha is increasing nowadays and indeed several styles are offered to both genders of customers according to their liking.

Tunisian shops of craft industry and other partners are located in the SOUKS of the MEDINA of Tunis, counted among most beautiful and richest MEDINA of the Islamic world. There, male and female can find the Balgha of his/her choice where several styles are offered for as low as $21.

Souk El Attarine is one of the oldest Medina’s Souks, which dates from the Hafside times. At this 13th century souk you will find perfume extracts, henna, wedding cases which include perfume, different beauty products, and nice jewelry - all the presents for the bride.
Image by Cimoi on Wikimedia under Creative Commons License.
5

The Souk El Koumach is also famous as Souk of fabric. It is located on the West part of the Mosquée Zitouna. The Souk El Koumach appeared in the Hafside times (12th-16th centuries). Souk El Koumach will offer you handcrafted Tunisian fabrics, materials, Tunisian carpets and clothes. Its three alleys covered by vaulting ceilings.
Image by Tony Hisgett on Wikimedia under Creative Commons License.
6

What to buy here: The Chechia.

The Chechia is the close-fitting traditional red skull cap worn in Tunisia. The history of the Chechia in Tunisia dates back five hundred years, to the time when Andalusian Arabs arrived from Spain. A cousin of the European beret, the head piece comes in several types and colours, but only the Tunisian Chechia is red in color.

The tourists, who see the “Chechia” as an excellent exotic ornament where they bring it back as souvenirs, hardly imagine the amount of hard work that is involved in making it or at least the way it was carried out by the code of practice and or by its quality. The beautiful “Chechia” is made of worsted, knitted wool made by women who make the bonnets "kabbous". These bonnets are sent to pressing, they sink it in hot water and soap and the men press them with their feet for a long time, in order to soften them, to a point that the stitches of knitting will disappear.

More and more of young people rediscover the red woolen traditional hat that was at one time worn by all Tunisian men but certain “Chechia” are even designed currently for women who wear them at the evening occasions. Now it is more used as accessory during occasional holidays.

Made by highly skilled craftsman, the “Chechia” occupies three whole sections of the local market of “Madina” in Tunis; Among the various souks in the medina of Tunis, the" Ech-Chaouachine" souks, or Bazaars, have the particularity to specialize in a typical Tunisian handicrafts, since it is here that the "Chechia" witnesses the final stages of its manufacturing.

Among various souks in the Medina of Tunis, the Ech-Chaouachine specialized in the trading of chachia – a boiled wool colored men's head-wear, with blue or black glans to make it more luxurious. Chachia production requires more than two months which includes several steps from crochet all the way to finishing; only the dying and the finishing production steps are executed at the souk.

According to the chronicler Al Wazir Al Sarraj, Mohamed Bey El Mouradi ordered the construction of the souk in 1691-1692, following the great push that Moorish migrant artisans gave to chachia production and trading at the beginning of the 17th century. The chachia artisans, called chaouachis, were mainly of Andalusian origins and initiated from the start one of the most important artisan guilds in the country. Their profit generating business was practiced exclusively in Tunis and followed an important production process and artisan hierarchy, headed by an amine, as with all other traditional crafts.

At the chachia workshops situated within Souk Ech-Chaouachine, artisans and apprentices sit on wooden benches leaning on workshop walls, the master artisans sitting behind a counter to meet customers.
Image by Benmahjoub mohamed on Wikimedia under Creative Commons License.
8

Souk Sidi Mahrez is a famous souk in the Medina. Located not far from the impressive Mosquée Sidi Mahrez, it offers various original items, beautiful souvenirs and a large assortment of crafts. Don’t forget to bargain and you will not only get excellent items at a good price, but also have some fun!
Image by Leandro Neumann Ciuffo on Wikimedia under Creative Commons License.