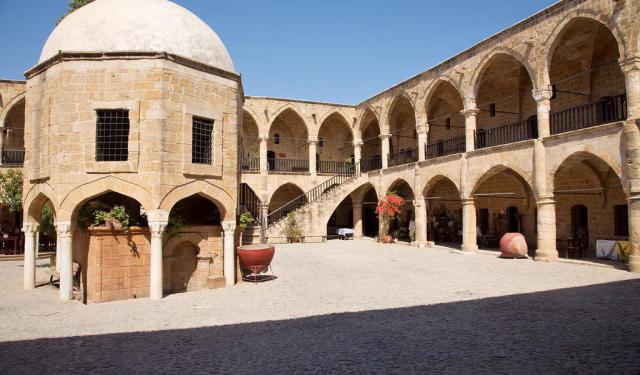 Image by MatthiasKabel on Wikimedia under Creative Commons License.

The Turkish Part of Nicosia’s Old Town is fairly considered the historic part of the city. The following tour highlights the splendor of the city's history, including social and religious aspects. Some of its buildings date back as far as the 13th century. Discover Nicosia’s rich history and get some great photo opportunities in the Turkish section of the Old Town.
How it works: Download the app "GPSmyCity: Walks in 1K+ Cities" from iTunes App Store or Google Play to your mobile phone or tablet. The app turns your mobile device into a personal tour guide and its built-in GPS navigation functions guide you from one tour stop to next. The app works offline, so no data plan is needed when traveling abroad.

Haydarpasa Mosque, one of Nicosia’s most popular attractions, was initially a 14th century cathedral raised by the Lusignans. The Cathedral of Saint Catherine was the second largest Gothic building in the city during that period. It was later enlarged and used as a convent until the Ottomans transformed it into a mosque, adding the minaret. Rich in architectural details, its large entrance is adorned with stone dragons and roses, as well as gargoyles and geometric details elsewhere on its exterior. Between 1986 and 1991 it underwent significant restoration and nowadays Haydarpasa Mosque is open to the public as an exhibition.
Image by Ewa Dryjanska on Wikimedia under Creative Commons License.
2

Bedesten, built as the Church of Saint Nicholas of the English in the 12th century, was designed in a blend of Byzantine and Medieval styles. Later, the Lusignans expanded the structure, adding Gothic elements. During the Venetian rule the church became the Greek Orthodox Metropolis. During the Ottoman period, this splendid building was transformed into a covered market, giving it its present name Bedesten, meaning ‘market’ in Turkish. An important landmark of Nicosia’s Turkish quarter, it was recently renovated to cope with a series of earthquakes and other calamities it had suffered damage from over the years.
Image by petrus.agricola on Flickr under Creative Commons License.
3

Büyük Han, one of Nicosia’s most popular attractions, is an immense inn constructed in the 16th century by the Ottomans. Among the most impressive monuments of that period, it was initially called Alanyalilar's Han. In the 17th century it attained its present name, which means ‘Big Inn.’ During the British period, it was used as the city’s main prison. The building is reminiscent of a fortress, with a multitude of arches and a dome in the center of the inner yard. Hazving undergone several renovations, it is now home to several shops and cafes.
Image by MatthiasKabel on Wikimedia under Creative Commons License.
4

Kumarcilar Han, an inn built in the 17th century by the Ottomans to host visitors to the city, is also known as Gamblers' Inn. Unfortunately, the present state of the building is poor, but its ruins preserve the rich history of this important monument. Designed as a two-story inn with fifty six rooms, later the building was enriched with columns, arches, a large entrance and a staircase.
Image by MatthiasKabel on Wikimedia under Creative Commons License.
5

Büyük Hamam, the oldest Turkish bathhouse in the city, was erected on the site of the 14th century St. George of the Latins Church. The only element that remained unchanged when the public bath was built in 1571 was the main entrance. This bathhouse became a popular spot since many residences lacked personal bathrooms. One unusual fact is that this structure sits partially below ground due to each new city being built on the ruins of the former. Büyük Hamam is one of the most stunning remains of the Ottoman period in Nicosia.
Image by Lancastrian on Flickr under Creative Commons License.
6

The Venetian Column is a beautiful landmark located on a central roundabout in the Turkish part of the walled city. This granite column was transferred from Salamis in 1489. After its installation in Nicosia, it was decorated with the Lion of Saint Mark and the Venetian coat of arms. In 1570 the Ottomans removed the column, storing it in the backyard of Sarayonu Mosque. In 1915 the British raised the Venetian Column on its original site, adding a globe on top to replace the lost Lion of Saint Mark, and an engraving of the years of the column's removal and replacement.
Image by Steffen Löwe on Wikimedia under Creative Commons License.
7

The Armenian Church and Monastery, initially named the Benedictine Abbey of Our Lady of Tyre, was raised in the 13th century. Originally intended as a convent for Cypriotic nuns, in 1571 the Ottomans handed the building over to the Armenian population of Nicosia as a reward for their support. The building was designed in the Gothic style, its distinguishing features being the splendid nave with cross vaults, and a newer unique bell tower. It houses several tombs, the oldest dating back to the 14th century.
Image by placid casual on Flickr under Creative Commons License.
8

Kyrenia Gate, the northern of the walled city’s three gates, was built in 1562 by the Venetians. Initially named in honor of the Venetians' city guard, a very important position in that period, the name sounded like "Porta del Proveditore." During the Ottoman rule it was renamed Edirne Gate and underwent several improvements. The gate is inscribed with emblems from the Venetian, Ottoman and British periods. Nowadays it serves as a tourist information office.
Image by Ewa Dryjanska on Wikimedia under Creative Commons License.
9

Kuğulu Park, a very peaceful place surrounded by several landmarks, was established nearly 40 years ago. Since then it has received a few restorations, the most significant one in 1993. Northern Nicosia’s most popular attraction, it is used for social events such as concerts, parades and meetings. This park includes a playground for children. Next to it is the Residence of the President of the Turkish Republic of Northern Cyprus, also known as Cephane (or Quirini) Bastion.
Image by Magda Sobkowiak on Flickr under Creative Commons License.