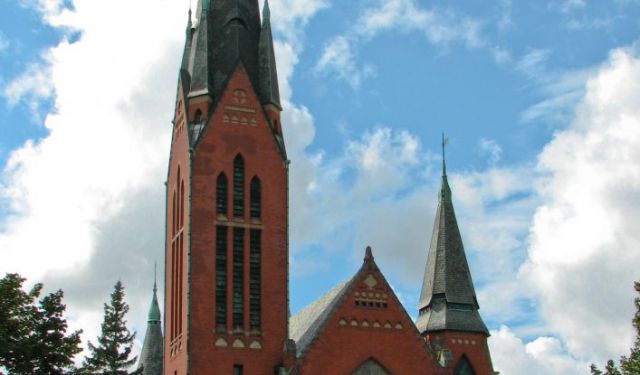 The first capital city of Finland, Turku has always been an important religious centre of the country. 13th century Turku Cathedral is the city’s religious center piece and the seat of the Archbishop of Finland. Take this self-guided walking tour to visit Turku’s most celebrated places of worship.
How it works: Download the app "GPSmyCity: Walks in 1K+ Cities" from iTunes App Store or Google Play to your mobile phone or tablet. The app turns your mobile device into a personal tour guide and its built-in GPS navigation functions guide you from one tour stop to next. The app works offline, so no data plan is needed when traveling abroad.

Martin's Church in Turku, Finland is the main church of Martin's parish, founded in 1921. The church was consecrated on the 450th anniversary of the birth of Martin Luther, on November 12, 1933. The designers of the church were architects Totti Sora and Gunnar Wahlroos. The church represents architechtual functionalism. Martin's church is a long church with three aisles and very narrow side aisles. The church has a functional and singular practicality of its own. The barrel-vaulting of the roof is one of the most outstanding features of the church. The altar, the pulpit and the roof are notable features of architect Sora's work. On top of the pulpit, the architect has placed a crown. The same theme is featured as a decoration to the hymn list table. The architects have clearly thought of the church as a royal court chamber and for this reason, the basic construction is reminiscent of a basilica. The artist Aarre Aaltonen has made five decorative sculptures for the pulpit.
Image by Samuli Lintula on Wikimedia under Creative Commons License.
Sight description based on wikipedia
2

Michael's Church is a church situated in central Turku. It is named after Archangel Michael and was completed in 1905. Michael's church is a distinguished example of the neogothic style in architecture. It is a long church with three aisles, galleries and a multifaceted choir. In addition to the main entrance, there are also doors at each corner of the church. The sacristy is situated behind the choir. The main spire rises to a height of 77 meters from the foundation. It dominates the western skyline of the city of Turku and was designed by Professor Lars Sonck; it is one of the most popular wedding churches in Turku, capable of seating 1,800 people. When Sonck won the competition for the church in 1894, he was a 23-year old architectural student. Michael's Church is older than Michael's parish. The parish dates back to 1921.
Image by Markus Koljonen on Wikimedia under Creative Commons License.
Sight description based on wikipedia
3

Situated in the city centre, Turku Roman Catholic Church known as Saint Bridget is another attractive place of worship that was built in 1936 by the Hemming congregation, which was founded in 1922. Beautiful religious art works decorate the inside walls of the church. The church was badly destroyed during World War II, but successfully restored in 1966.
Image by Samuli Lintula on Wikimedia under Creative Commons License.
4

Betel Church is located in the VII District of Turku, Finland. It is a church of the Turku adventism parish. The jugend style church was completed in 1906 according to the plans of Frithiof Strandell. It was later renovated according to the plans of Erik Bryggman in 1927 and has a functional bell tower, among other things. The church is actually quite hidden from pedestrians. In recent years, there have been suggestions to open up a walkway from Yliopistonkatu to Puutarhakatu for pedestrians, thus allowing them to better admire the church. The Betel Church is listed among the most noted buildings of the cultural environment in Finland. In addition to regular services, the church has the vegetarian restaurant KASVIS-ravintola, which serves a lunch buffet. The restaurant uses organic and locally grown produce and also has vegan options.
Image by Antti Bilund on Wikimedia under Creative Commons License.
Sight description based on wikipedia
5

Image by Matti Mattila on Wikimedia under Creative Commons License.
Sight description based on wikipedia
6

Situated in the picturesque VII District, Turku Synagogue is the second synagogue to be built in Finland. The building was designed by architects Hindersson and Krook and served as a synagogue for Turku's Jewish community since 1912. The Turku Synagogue building boasts magnificent architectural features. The synagogue's daily service is held in an impressive environment decorated by beautiful canvases, statues, golden angels, stained glass and window arches that make this synagogue a popular tourist attraction.
Image by Harri Blomberg on Wikimedia under Creative Commons License.
7

The cathedral was originally built out of wood in the late 13th century, and was dedicated as the main cathedral of Finland in 1300, the seat of the bishop of Turku. It was considerably expanded in the 14th and 15th centuries, mainly using stone as the construction material. The cathedral was badly damaged during the Great Fire of Turku in 1827, and was rebuilt to a great extent afterwards.

Image by Pertsaboy on Wikimedia under Creative Commons License.
Sight description based on wikipedia
8

Saint Catherine's Church is located in Nummi, a suburb of Turku, Finland, in the same district as Turku Student Village. It represents the old Medieval church building tradition. Although it was once completely destroyed and has undergone several renovations, it has preserved something of its original appearance and retains the basic plan of a Medieval Finnish church. The construction began in the 1340s, the sacristy being completed first and the church later. Bishop Hemming and Bishop Thomas of Växjö consecrated the church on January 22, 1351. The church was named after its patron saint Catherine of Alexandria in 1991. It was previously located in the region of Kaarina and was known as Kaarina Church. The first mention of Saint Catherine of Alexandria was in a signet with which vicar Jacob of Nummi confirmed the then Episcopal election. However, Nummi, which surrounded the church, became a part of Turku in 1939. Later the church changed its name to St Catherine's Church.
Image by Samuli Lintula on Wikimedia under Creative Commons License.
Sight description based on wikipedia