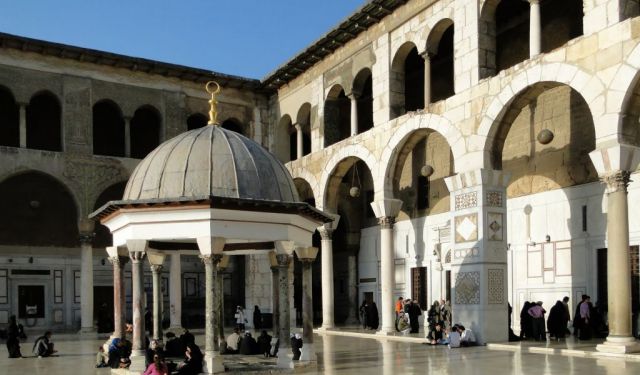 Old Damascus is a fabulous area where you will find a number of amazing attractions. The prominent Umayyad Mosque is a Damascene jewel and part of a fascinating area. Follow the next tour to discover the best attractions in the Umayyad Mosque area!
How it works: Download the app "GPSmyCity: Walks in 1K+ Cities" from iTunes App Store or Google Play to your mobile phone or tablet. The app turns your mobile device into a personal tour guide and its built-in GPS navigation functions guide you from one tour stop to next. The app works offline, so no data plan is needed when traveling abroad.

1) Minaret of the Bride

The Minaret of the Bride is one of the Umayyad Mosque’s three beautiful minarets. It is located on the northern part of the mosque and is the oldest minaret, dating back to the building’s construction.
Image by Bernard Gagnon on Wikimedia under Creative Commons License.
2

The Shukri al-Quwatli House is located near the magnificent Umayyad Mosque. It was the former residence of Shukri al-Quwatli, a well-known Syrian politician and former president, and is a good example of the city's beautiful architecture.
Image by Strider52 on Wikimedia under Creative Commons License.
3

The Mausoleum of Saladin holds the resting place and grave of the medieval Ayyubid Sultan Saladin. It is located next to the northwest corner of the Umayyad Mosque in Damascus. The mausoleum was built in 1196, three years after the death of Saladin. It was once part of the al-Aziziyah madrasah, but nothing remains of the school.

It was originally built by Saladin's son, Al-Adil I. Saladin's body was interred temporarily at the Citadel of Damascus until the construction of the building was completed in 1196. The madrasah was built later by Saladin's other son, Al-Aziz Uthman.

The mausoleum itself is rather small and modest. The main square chamber displays ablaq walls and holds four arches capped by a cupola. Drawing on its history, the interior shows a remarkable mix of Hohenzollern, Ayyubid and Ottoman architecture. The room holds two cenotaphs. The original one, a wooden tomb, richly decorated with geometric and astral patterns, holds Saladin's body. The second one, is a marble coffin which was a gift from Emperor Wilhelm II. The mausoleum also holds another chamber which is used for Quranic recitation, and is accessible from the eastern side, in addition to five smaller rooms along the northern side of the building.

Image by Heretiq on Wikimedia under Creative Commons License.
Sight description based on wikipedia
4

The Umayyad Mosque, also known as the Great Mosque of Damascus or formerly the Basilica of Saint John the Baptist, located in the old city of Damascus, is one of the largest and oldest mosques in the world. It is considered the fourth-holiest place in Islam.

After the Arab conquest of Damascus in 634, the mosque was built on the site of a Christian basilica dedicated to John the Baptist (Yahya). The mosque holds a shrine which today may still contain the head of John the Baptist, honored as a prophet by both Christians and Muslims alike, and the place where Isa (Jesus) will return at the End of Days. The tomb of Saladin stands in a small garden adjoining the north wall of the mosque.

Image by Jerzy Strzelecki on Wikimedia under Creative Commons License.
Sight description based on wikipedia
5

The Temple of Jupiter in Damascus was built by the Romans, beginning during the rule of Augustus and completed during the rule of Constantius II. An ancient Aramaean temple to Hadad once stood on this site. The Romans associated Hadad with Jupiter, and rebuilt the temple in Jupiter's name. The temple drew large crowds to its festivals and Damascus became famous as the city of Jupiter. Theodosius I converted the temple to a church dedicated to John the Baptist. After the Muslims took over Damascus in 635 CE, the church was shared for seventy years, but Al-Walid I converted it to the Umayyad Mosque.

The inner court, or temenos is believed to have been completed soon after the end of Augustus' reign in 14CE. This was surrounded by an outer court, or peribolos which included a market, and was built in stages as funds permitted, and completed in the middle of the first century CE. At this time the eastern gateway or propylaeum was built. The end of the second, century during the reign of Septimius Severus, saw a major upgrading in a more flamboyant style.
Image by Luisvassy on Wikimedia under Creative Commons License.
Sight description based on wikipedia
6

The Al-Gharbiyya Minaret is one of the Umayyad Mosque’s three minarets. Located on the southwest corner, it is the mosque’s most beautiful minaret, built in a magnificent Mamluk style and lavishly decorated.
Image by upyernoz on Flickr under Creative Commons License.
7

Al Khadraa Palace, or Green Palace, is a precious Damascus landmark and valuable archaeological site. Adjacent to the south wall of the magnificent Umayyad Mosque, it was built on the ruins of an old palace.
Image by Verity Cridland on Flickr under Creative Commons License.
8

The Minaret of Jesus is another beautiful minaret of the Umayyad Mosque, located on its southeast corner. It is the tallest minaret and was so named because of the Syrian legend stating that this is the place at which Christ will descend on Judgment Day.
Image by Heretiq on Wikimedia under Creative Commons License.