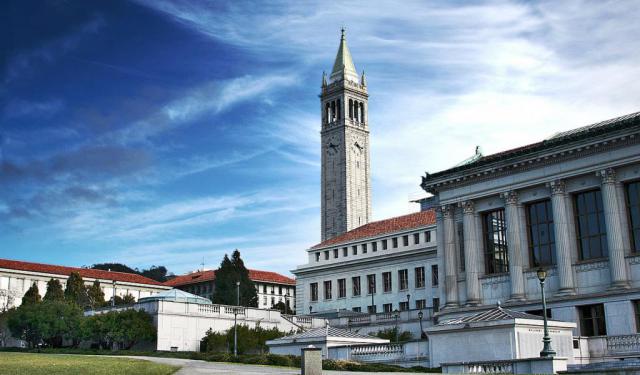 Image by Tristan Harward on Wikimedia under Creative Commons License.

University of California Tour in Berkeley, Part 1 (Self Guided), Berkeley

The campus of the University of California is the core of Berkeley's treasures. Its design is the result of a 1898 architectural competition. Every part of its architecture has its own story. Take a look at the southern part of the university in the following tour.
How it works: Download the app "GPSmyCity: Walks in 1K+ Cities" from iTunes App Store or Google Play to your mobile phone or tablet. The app turns your mobile device into a personal tour guide and its built-in GPS navigation functions guide you from one tour stop to next. The app works offline, so no data plan is needed when traveling abroad.

The Phoebe Apperson Hearst Memorial Gymnasium for Women was built in 1927 in honor of famous philanthropist and feminist, Phoebe Apperson Hearst. Designed by Bernard Maybeck and Julia Morgan, it consists of three studios, two gyms and three swimming pools. Its interior designers are Hansen, Murakami and Eshima, and it is listed in the National Register of Historic Places.
Image by Genista on Flickr under Creative Commons License.
2

The First Unitarian Church, founded in 1891, was designed by A.C. Schweinfurth and Bernanrd Maybeck. A fine example of the Bay Area Shingle style, the building and its basement occupy about 40 feet square. In 1960 the University of California acquired the building and it was converted into the Dramatic Arts Department.
Image by Sanfranman59 on Wikimedia under Creative Commons License.
3

Sather Gate is a prominent landmark separating Sproul Plaza from the bridge over Strawberry Creek, leading to the center of the University of California, Berkeley campus.

The gate was donated by Jane K. Sather, a benefactor of the university, in memory of her late husband Peder Sather, a trustee of the College of California, which later became the University of California. It is California Historical Landmark and in the National Register of Historic Places.

Originally, the gate served as the terminus of Telegraph Avenue, and marked the University's south entrance. (The circle in front of the gate served as a turning point for the trolleys coming from Oakland.) The University later expanded further south of Strawberry Creek, and the gate is now well separated from Berkeley's city streets by Sproul Plaza.

Image by Falcorian on Wikimedia under Creative Commons License.
Sight description based on wikipedia
4

Wheeler Hall is a building on the campus of the University of California. Home to the English department, it was named for the philologist and university president Benjamin Ide Wheeler.

The building was opened in 1917. It houses the largest lecture hall on the Berkeley campus.

The building was the site of many of the Free Speech Movement protests in the 1960s and is a focal point of the Berkeley campus. In recent history, it has been the place for many university protests and the subject of several building takeovers.

South Hall, built in 1873, is the oldest building on the University of California, Berkeley campus and the only remaining building of the original campus. South Hall was originally the counterpart of North Hall, which no longer exists, but was located where the Bancroft Library currently stands.

The first physics laboratory in the United States was hosted in South Hall in 1879. It also has been home to the College of Agriculture, a business school, and a temporary museum for the state geological survey. The University Herbarium was housed in South Hall from 1890 till 1897. It currently houses the UC Berkeley School of Information. When Wheeler Hall was planned, the entrance of South Hall was removed from the west side and added on the east side entrance.

According to legend, the rooftop scene of Mary Poppins was filmed at South Hall, although this has been shown to be false.

Campus tour guides often point out a small stone bear in the architecture of South Hall, above the entrance, in the third circle from the left, claiming it is the smallest bear statue on campus.

Sather Tower is a campanile (bell and clock tower) on the University of California, Berkeley campus. It is more commonly known as The Campanile due to its resemblance to the Campanile di San Marco in Venice, and serves as UC Berkeley's most recognizable symbol.

It was completed in 1914 and first opened to the public in 1917. The tower stands 307 feet (93.6 m) tall, making it the third tallest bell and clock-tower in the world. It was designed by John Galen Howard, founder of the College of Environmental Design, and it marks a secondary axis in his original Beaux-Arts campus plan. Since then, it has been a major point of orientation in almost every campus master plan. The tower has seven floors, with an observation deck on the eighth floor. Some floors are used to store fossils.

The Hearst Memorial Mining Building at the University of California is currently home to the university's materials science department. The Classical Revival style building is listed in the National Register of Historic Places and is also designated as part of California Historical Landmark.

Construction began in 1902, as part of Phoebe Hearst's master campus development plan and in memory of George Hearst, who had been a successful miner.

From 1998 to 2003, the building underwent a massive renovation, expansion, and seismic retrofit, in which a platform was built underneath the building, and a suspension system capable of up to 1 meter lateral travel was installed. To keep the expansion distinct from the historic building, shot peened aluminium (rather than stone) and a more modern design were used in the new construction.

Gilman Hall is a building on the campus of the University of California. Room 307 was where Glenn T. Seaborg and his coworkers identified plutonium as a new element on February 23, 1941 and as such, is designated a National Historic Landmark. The building itself is designated a National Historic Chemical Landmark, recognizing the two Nobel Prizes in Chemistry that have resulted from research done in the building.

Gilman Hall has been used continuously by the College of Chemistry for 80 years; today it is occupied by the Department of Chemical Engineering. However, its laboratory equipment is no longer suitable for modern chemical research and as such, the University has renovated and converted some of the rooms into offices, classrooms, and small research laboratories.

The school is situated in three connected buildings surrounding a central courtyard on the southeastern corner of the Berkeley campus. The final design of architect Charles Moore, the mini-campus was completed in 1995. The school is planning to expand its facilities with a new commons building shared with the Berkeley School of Law. It constantly ranks as one of the top ten business schools in worldwide rankings published by The Economist, US News & World Report, and Bloomberg Businessweek.

Bowles Hall is an all-male residence dormitory at the University of California, world renowned for its unique traditions, legendary parties and camaraderie.

The dormitory was the first residence hall on campus, dedicated in 1929, and was California's first state-owned dormitory. It was built in 1928 on a $350,000 grant by Mary McNear Bowles in memory of her husband, Cal alumnus and UC Regent Phillip E. Bowles. Mr. Bowles was said to have three loves, Horses, Horticulture and the University of California.

The Hall displays the unique and formidable appearance of a medieval castle, with a stone exterior and a lush wood entryway. Although a University-operated residence hall, its male-only tradition, classic facade, partitioned four-man rooms, and community facilities give it a feeling much closer to that of a social fraternity. Bowlesmen have traditionally been a tight-knit group of students who regularly practice various traditions and rituals that are exclusive to the Hall. In the 1980s, it was listed in the National Register of Historic Places, a prime example of the style of architecture called 'Collegiate Gothic'. The building is still being used as an all-men's residence up to this day, although some traditions have not survived.

The William Randolph Hearst Greek Theatre, known locally as simply the Greek Theatre, is an 8,500-seat amphitheater owned and operated by the University of California.

The Greek Theater was built in 1903 on the site of a rough outdoor bowl already in use as an amphitheater since 1894 known as "Ben Weed's Amphitheater". The project was championed by University of California president Benjamin Ide Wheeler and was the first University building designed by John Galen Howard. Its construction was financed by newspaper magnate William Randolph Hearst, after whom it was named. The design of the theater is based directly on the ancient Greek theater of Epidaurus.