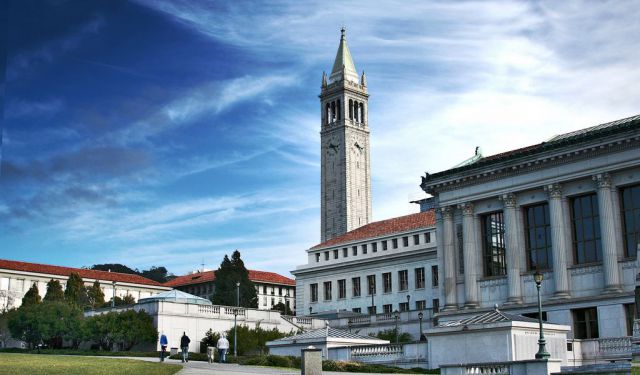 Image by brainchildvn on Wikimedia under Creative Commons License.

University of California Tour in Berkeley, Part 2 (Self Guided), Berkeley

As the University of California is considered an architectural beauty, the north side of the campus features some of the university's most historically significant buildings. Founders' Rock, the University House and Wellman Hall, along with the campus’ green spaces, such as Memorial Glade and Eucalyptus Grove, are wonderful city landmarks worth seeing.
How it works: Download the app "GPSmyCity: Walks in 1K+ Cities" from iTunes App Store or Google Play to your mobile phone or tablet. The app turns your mobile device into a personal tour guide and its built-in GPS navigation functions guide you from one tour stop to next. The app works offline, so no data plan is needed when traveling abroad.

Memorial Glade is a green space located at the core of the university campus. It is home to a variety of trees, including a grove of trident maples. Memorial Glade is a popular place for students to relax between classes and offers a great view of many other campus landmarks.
Image by Gku on Wikimedia under Creative Commons License.
2

The Doe Memorial Library is the main library of the UC Berkeley Library System on the UC Berkeley campus. The library is named after its benefactor, Charles Franklin Doe, who was persuaded by the then President of the University of California, Benjamin Ide Wheeler, in 1904 to bequeath funds for its construction.

In 1900, Emile Benard won an architectural competition for the design of the library, and the Classical Revival style library was completed in 1911. The Doe Library houses both the Undergraduate and Gardner (Main) Stacks collections.

The main reading room is open to the public.

Image by Minesweeper on Wikimedia under Creative Commons License.
Sight description based on wikipedia
3

Also designed by John Galen Howard, California Hall is located in the center of the university campus. Completed in 1906, throughout the years it has undergone many renovations. This building is part of Howard's Beaux Arts architectural plan for the campus. Listed in the National Register of Historic Places, California Hall houses the university’s major administrative and personnel offices.
Image by Sanfranman59 on Wikimedia under Creative Commons License.
4

The arena was originally built in 1933 as the Men's Gym. It was renamed Harmon Gym in 1959, after Oakland financier A.K.P. Harmon, who donated the funds to build Cal's first indoor athletic facility in 1879. Lou Campanelli tried to have it renamed "Harmon Arena" when he became coach, but it never really caught on. The playing surface, after being known as simply "Room 100" since the arena opened, was renamed Pete Newell Court in 1987 in honor of Pete Newell, who led Cal to the national championship in 1959.

Eucalyptus Grove contains the tallest of these hardwood trees in North America. Planted in 1882, in California they actually grow healthier than in Australia, their native location. The grove has been a significant part of the university’s landscape heritage, adding a refreshing fragrance to the air.
Image by John-Morgan on Flickr under Creative Commons License.
6

Wellman Hall, located between Giannini and Hilgard Halls, was built in a Classical Revival style. This hall is distinguished by its circular entrance, which is like a tower. Its facade is made of granite, which along with all the granite on the campus, was taken from the Sierra Nevada Mountains. Serving as an agricultural hall, Wellman Hall was listed in the National Register of Historic Places in 1982.
Image by Sanfranman59 on Wikimedia under Creative Commons License.
7

Along with Giannini and Wellman Halls, Hilgard Hall is a former component of the Agriculture Trio. Built in a Classical Revival style, it is decorated with agricultural motifs such as scythes and sheaves of wheat. Its red roof tiles and soft red columnar friezes make Hilgard Hall a beautiful landmark.
Image by Sanfranman59 on Wikimedia under Creative Commons License.
8

It is actually the only residence in the campus's central core, as all student housing lies outside the core campus (but within walking distance). At the beginning of every academic year, the chancellor invites the incoming class to a garden party at the University House. The chancellor then gives a welcoming speech, and various Berkeley Choirs sing. Various snacks and drinks are served on the lawn.

The Chancellor and his/her spouse live on the second floor of the home, while the ground floor is used for receptions and other events. The dining room features art on loan from the UC art library.

Haviland Hall, built in 1924, is considered one of the campus’ Beaux Arts treasures. As many halls on campus, it was designed by John Galen Howard, and was designated a Berkeley landmark in 1981, seven years earlier than any other campus building. Haviland Hall is located just near Observatory Hill.
Image by Sanfranman59 on Wikimedia under Creative Commons License.
10

North Gate Hall, designed by John Galen Howard, was built in 1906. Also known as the Ark, it had a rustic design featuring small balconies and windows, though it has undergone many renovations since. Rooms were added, surrounded by a courtyard with impressive brick pavement. This building serves as part of the university’s architecture department.
Image by Sanfranman59 on Wikimedia under Creative Commons License.
11

On the corner of Hearst Avenue and Gayley Road lies the Founders' Rock, the spot, according to college lore, where the 12 trustees of the College of California, the nascent University of California, Berkeley, stood on April 16, 1860, to dedicate the property they had just purchased. This is, supposedly, the same spot where Frederick Billings stood in 1866 when he remembered Bishop Berkeley's verse - "Westerward the course of empire takes it way" -- and thus inspired the name of the new city. A plaque was put on this spot on Charter Day in 1896.