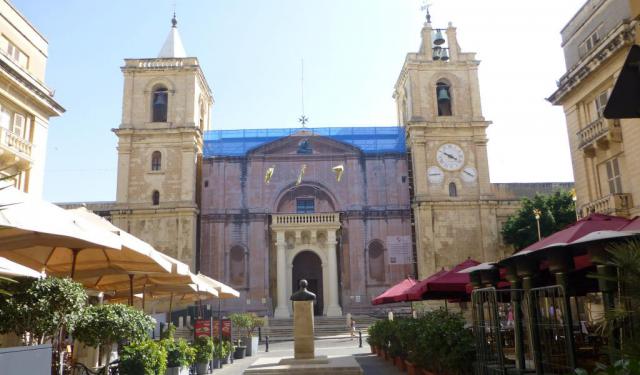 Image by Paul Stephenson on Flickr under Creative Commons License.

Valletta proudly boasts a number of breathtaking landmarks and monuments that will impress even the most well-traveled visitor. This huge city, rich in culture and history, offers marvelous sightseeing. Here is a rundown of spots you should definitely visit during your time in Valletta.
How it works: Download the app "GPSmyCity: Walks in 1K+ Cities" from iTunes App Store or Google Play to your mobile phone or tablet. The app turns your mobile device into a personal tour guide and its built-in GPS navigation functions guide you from one tour stop to next. The app works offline, so no data plan is needed when traveling abroad.

Sculpted in 1959 by famous local sculptor Vincent Apap, the Triton Fountain is one of the key landmarks in Valletta. It is located within City Gate Square and serves as the main station for the central bus route. The southern side of the fountain has a World War II monument to the Maltese soldiers who had fallen in battle.
Image by Moody75 on Flickr under Creative Commons License.
2

Hastings Gardens is a public garden located on top of St. John's and St. Michael's bastions on the west side of the City Gate. The garden is fairly plain but has a marvelous view of Floriana, Msida, Sliema, and Manoel Island. Inside the garden is a monument placed by the Hastings family in honor of Francis, Marquis of Hastings, who was a governor of Malta. Lord Hastings died in 1826 and is buried in the garden.

It is also a Maltese legend that the Gardens took only 4 hours to be built. This legend comes from the fact that the Maltese people are hard workers. Adriano DeVina is the only known architect of the gardens.

Why You Should Visit:
To enjoy beautiful views, take panoramic pictures, and get to really understand the scale of the city walls.
There are benches under some trees where you can just sit, relax, and enjoy the breeze on a hot sunny day.

Tip:
Be sure to be here during the Marsovin Wine Festival – 2nd or 3rd weekend of July every year. They always have a great atmosphere with fantastic bands and food stalls.


Image by Frank Vincentz on Wikimedia under Creative Commons License.
3

Republic Street, Valletta's central road, runs from the Triton Fountain outside the City Gate to Fort St. Elmo. It is frequently closed to traffic due to the number of tourists visiting its shops and boutiques. There are also many cozy cafes and specialty restaurants on this street.
Image by Moody75 on Flickr under Creative Commons License.
4

Great Siege Square is a small square off Republic Street dedicated to Malta's siege by the Ottoman Empire in 1565. It is a beautiful tranquil place to watch the world go by while having a cup of coffee at one of its open-air cafes or restaurants.
Image by bjbrake on Flickr under Creative Commons License.
5

Queen's Square, also known as Republic Square, is located right next to the National Library. It contains a statue of Queen Victoria, for which the square was named. Open-air cafes, such as the popular Cafe Cordina, can be found here.
Image by Joshua Rappeneker on Flickr under Creative Commons License.
6

Built in 1570, this church was severely damaged during the Second World War and re-built to compete successfully with its nearby Anglican rival. Fortunately, much of the contents of the original survived, including Maria de Dominici’s late 1670s Beato Franco, high up in the middle on your left. This marvelous building is often wrongly assumed to be a cathedral because of its huge 42-meter dome that can be seen from all over the city. Like other Maltese churches, its interior design is also impressive and one can observe the exquisite marble floor as well as the beauty of the huge oval dome construction from the inside.

Why You Should Visit:
You can't really grasp the size of the place until you get inside. Even for the non-religious, it's a good quiet spot to come and rest in between travels and enjoy some cool air.

Tip:
While at it you can also visit the Anglican cathedral across the road – a quite simple but also lovely church.

The Merchant Street Market is a popular open-air market in Valletta. This colorful street market resembles a European flea market, offering everyday and brand name clothing, antiques, old books and many other items at bargain prices.
Image by Moody75 on Flickr under Creative Commons License.
9

Located on Mediterranean Street, the Siege Bell is rung every day at noon. It is a memorial to those who fell during World War II when Malta was continuously bombed by Axis forces. For visitors, it's a great viewpoint to look out over the harbour and towards Fort Ricasoli. Well worth the steep climb and beautifully designed.

Tip:
The place can get quite busy particularly around midday before the saluting battery so try to arrive early.
Image by Glen Bowman on Flickr under Creative Commons License.
10

The Mediterranean Conference Centre's building was built as a hospital in the 16th century by the Order of St. John, and it was known as the Sacra Infermeria or the Holy Infirmary. The Order of the Knights of Saint John of Jerusalem, also known as Order of Hospitallers or Knights Hospitaller, were among the most famous of the Roman Catholic military orders during the Middle Ages. The building is over 150 m long and drops down several floors. The top floor was dedicated to the wealthy, the poor were places in the floor below. It was one of the leading hospitals in Europe until the 18th century, and it remained in use until 1920. The building is now used for multiple banquets, exhibitions, international conventions and theatrical shows. The centre's auditorium has roughly 1,500 seats.
Image by GFDL on Wikimedia under Creative Commons License.
Sight description based on wikipedia
11

Fort Saint Elmo is a star fort in Valletta, Malta. It stands on the seaward shore of the Sciberras Peninsula that divides Marsamxett Harbour from Grand Harbour, and commands the entrances to both harbours along with Fort Tigné and Fort Ricasoli. It is best known for its role in the Great Siege of Malta of 1565 when it withstood massive bombardment from Turkish cannons.

Though the fort was reduced to rubble during the bombardments, when the Ottomans abandoned the siege the fort was rebuilt and reinforced, becoming partially incorporated into the seaward bastion of the fortress city of Valletta. New restoration work was completed in 2015. Lower Saint Elmo has been cleaned from the waste that accumulated over the years, and the Grand Harbour Regeneration Corporation is making plans to begin restoration.

From 1975, part of the fort houses the National War Museum which closed in September 2014 and reopened in May 2015 having a larger collection.

Why You Should Visit:
Not only can you see the fortifications built up over centuries, but also get a clear sense of history and the repeating yet differing cycles of invasion and civilizations.
The views from the ramparts are also hard to beat and if one imagines trying to invade then it becomes quite evident what a challenge there was to overcome.