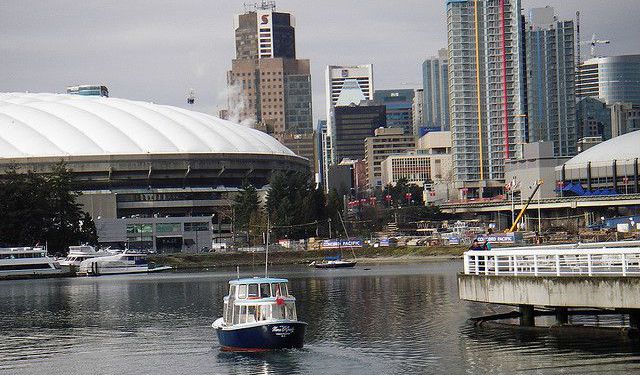 Image by SqueakyMarmot on Flickr under Creative Commons License.

Mount Pleasant was one of the very first neighborhood zones developed in the city of Vancouver. Here you can find lively coffee shops, bistros, trendy boutiques, galleries, and much more. Take this walking tour to discover all the great attractions of the Mount Pleasant area.
How it works: Download the app "GPSmyCity: Walks in 1K+ Cities" from iTunes App Store or Google Play to your mobile phone or tablet. The app turns your mobile device into a personal tour guide and its built-in GPS navigation functions guide you from one tour stop to next. The app works offline, so no data plan is needed when traveling abroad.

Heritage Hall is a landmark building that dates back to 1915. The concrete structure features a unique stone and brick facing. Originally built as a Postal Station, it is now run by the Heritage Hall Preservation Society.
Image by eternal keni on Flickr under Creative Commons License.
2

Tenth Avenue Alliance Church sits in the heart of Vancouver, not far from BC University. It is welcoming of people from all backgrounds and is a self-proclaimed "community of healing" for the broken.
Image by Jackie Faulkner under Creative Commons License.
3

Originally built in 1910 as the Mount Pleasant Presbyterian Church, this edifice was transformed into the Evangelistic Tabernacle in 1927. That, however, was not the last designation of the building. In 1994 it was converted into luxury condominiums, which still stand today.
Image by Kenny Louie on Flickr under Creative Commons License.
4

The 7-story Lee Building, located at 175 East Broadway, was built in 1912 by the merchant Herbert Lee. For many years, it was the hub of activity of South Fraser. At the time of its construction, the Lee Building was the tallest standing structure south of False Creek.
Image by Leedman on Flickr under Creative Commons License.
6

The Goh Ballet Theater building, constructed in 1912, was a part of the Royal Bank. In 1978, it was transformed into the internationally renowned Institute of Ballet. Nowadays, this ballet academy prepares students for a successful career in the field of dance.
Image by dalbera on Flickr under Creative Commons License.
7

Henry Bloomfield House is located at 2532 Columbia Street. This building is Vancouver's finest example of Bloomfield's work. Henry Bloomfield and Sons designed some of the most elegant stained glass in British Colombia.
Image by Kenny Louie on Flickr under Creative Commons License.
8

Vancouver City Hall is a twelve story building topped with a clock, designed by architect Fred Townley and Matheson. Currently, it serves as the seat of the Vancouver City Council.

The building's style is a compromise between modern and art deco, with an intriguing, stepped pattern leading up to the main tower portion. Inside, the City Hall is richly adorned with cream and black terrazzo floors, and walls covered in polished marble and capped in horizontal brass banding. Fluted marble pillars support the elegantly gilded ceiling, the stairwells are detailed in black marble, the walls are highlighted with solid brass handrails, octagonal newel panels punctuate the landings, and mezzanine balconies offer an unimpeded view of the whole space. The building's original features are extremely well preserved, and in many cases are the original pieces that were installed when it was first constructed.

This richly decorated building was built during the height of the Depression for $1 million, and was intended as a public works project to help employ the many Vancouver residents affected by unemployment. It was originally ordered by the Vancouver Civic Building Committee, and construction began in 1936. In 1976, the building was declared one of Vancouver's heritage buildings of primary significance.

Image by keepitsurreal on Flickr under Creative Commons License.