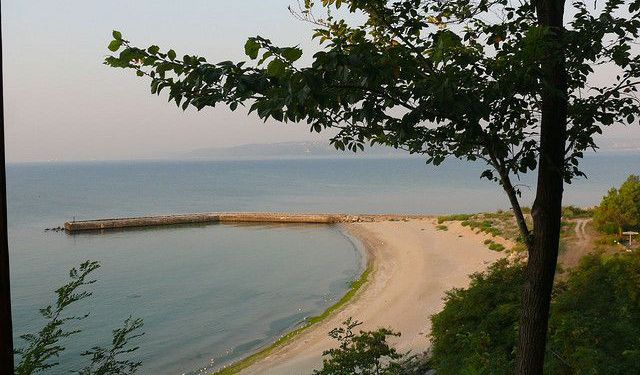 Image by veni markovski on Flickr under Creative Commons License.

One of the experiences from a trip to Varna is seeing the Bulgarians go about their daily lives. Take our Varna Daily Life Tour to see where the locals go, from shopping to recreation and everything in between.
How it works: Download the app "GPSmyCity: Walks in 1K+ Cities" from iTunes App Store or Google Play to your mobile phone or tablet. The app turns your mobile device into a personal tour guide and its built-in GPS navigation functions guide you from one tour stop to next. The app works offline, so no data plan is needed when traveling abroad.

Located on D-r Piskiuliev street, the Central Market is the largest street market in Varna. All year round you can buy here the freshest fruit and vegetables, as well as cheap footwear and clothes, produced mainly in Turkey. There are also some great stores nearby where you can find quality jewelry. Look out for the famous fish store selling fresh fish from the Black Sea.
Image by NatalieMaynor on Flickr under Creative Commons License.
2

The Cinema Mustang opened in 1997 along with the Palas Cinema. The Mustang is the coolest and most technically developed cinema in the city. The main auditorium has 300 seats with a big screen and the most up-to-date Dolby stereo surround sound system. The second, smaller hall has Dolby Prologic sound, and is used for showing specialized arthouse movies.
Image by sailko on Wikimedia under Creative Commons License.
3

Nezavisimost Square is the city's central square, and is home to the Opera House, the Varna Cathedral and the Round Tower. There are also a lot of sidewalk cafes here, plus the City Garden, which is surrounded by curious and historic buildings. You can also find a beautiful round fountain which is the largest in the city and seen as a symbol of Varna.
Image by www.worldtravellers.dk // Nicolai Bangsgaard on Flickr under Creative Commons License.
4

To experience some exotic food from Turkey, there's no better place in Varna than the Orient Turkish Restaurant. The service is great, and you will be delighted with the large range of tasty dishes, such as shish kebabs, tabouleh and stuffed vine leaves. The restaurant is surrounded by green trees and bushes which create a very relaxing atmosphere.
Image by Christian Kadluba on Wikimedia under Creative Commons License.
5

Varna's beach is very clean and beautiful. Surrounding the beach itself you'll find lots of bars, disco-clubs, restaurants and many other places for a good time out. The most fun activity of all, however, is to simply walk along the beach enjoying the beautiful turquoise waters and taking some great photos.
Image by Harrieta171 on Wikimedia under Creative Commons License.
6

The Boris Georgiev City Art Gallery is a municipal gallery that has occupied the building at 1 Lyuben Karavelov Street since 1944. The building itself was built in 1885 and originally accommodated a high school for boys. It was renamed the Boris Georgiev City Art Gallery in 1999 in honour of the Varna-born artist. Inside you'll see a large collection of Bulgarian art from the early 20th Century onwards, most notably the principal collection of Georgiev's works. Among other Bulgarian artists presented here are Vladimir Dimitrov, Ivan Milev, Sirak Skitnik, Zlatyu Boyadzhiev and Tsanko Lavrenov. In total, the gallery has an area of 1,000 square metres spread over eight exhibition halls. The gallery's third floor regularly hosts concerts, plays and readings.
Image by Ivan Milev on Wikimedia under Creative Commons License.
Sight description based on wikipedia
7

The economic university of Varna was founded in 1920, and up until 1938 was known as the Higher Trading School. Nowadays it is one of Bulgaria's oldest universities and an internationally respected institution that attracts students from all over the world.
Image by ben.gallagher on Flickr under Creative Commons License.
Sight description based on wikipedia