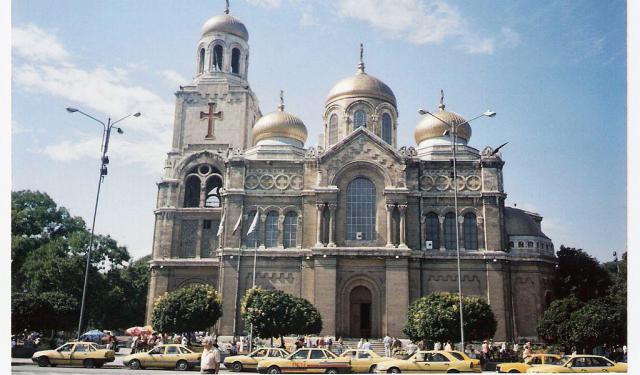 Image by avishai teicher on Wikimedia under Creative Commons License.

Varna is a city with many great places of worship that bring the history of faith in Bulgaria into a sharp focus. In a mostly Orthodox Christian country, the majority of Varna's churches are part of this confession. However there are also some mosques that reflect the once powerful influence of the Ottoman Empire. Take our tour to see the key places of worship in Varna.
How it works: Download the app "GPSmyCity: Walks in 1K+ Cities" from iTunes App Store or Google Play to your mobile phone or tablet. The app turns your mobile device into a personal tour guide and its built-in GPS navigation functions guide you from one tour stop to next. The app works offline, so no data plan is needed when traveling abroad.

The Sveta Paraskeva Petka Church - also known simply as Sveta Petka - was founded in the first years of the 20th Century. Unlike some other churches in the city, it remains intact in its original state. Interestingly, it was not painted until 1973 when a number of icons were added to the walls. These fascinating images of saints complete the experience of what is already a very beautiful church.
Image by Корисник on Wikimedia under Creative Commons License.
2

Located on Angel Georgiev Street, the Aziziye Mosque is so old that nobody knows for sure when it opened. Some say it was founded back in 1795. This beautiful mosque features a classic square-based minaret to the right of the entrance. The mosque took its name from Sultan Abdul Aziz of the Ottoman Empire, who reigned in 1861.
Image by Jorge Franganillo on Flickr under Creative Commons License.
3

3) Dormition of the Theotokos Cathedral (must see)

Image by Harrieta171 on Wikimedia under Creative Commons License.
Sight description based on wikipedia
4

Built in 1865, the St Nicholas church was funded by Paraskeva Nikolau, who bequeathed 50,000 roubles for its construction. Initially, when opened, it was thought of as a Greek church due to its Greek Orthodox style, unusual to Bulgarians.
Image by Pavlov on Wikimedia under Creative Commons License.
5

This church was completely destroyed by fire in 1843; its reconstruction started only a year later. Seen from above, the rebuilt temple resembles a cross in the form of an unusually shaped bell-tower dome that is typical of Armenian and Georgian temples. The walls are painted in a byzantine manner and feature artistic icons.
Image by timofair on Flickr under Creative Commons License.
6

Founded in 1602, this church is situated next to the Roman Baths. It was burnt down and then restored in 1640. Until 1914 the church was under the tutelage of the Greek Archdiocese. Closed for ten years, it was reopened in 1924. The most important treasure of this church is its icons. The church itself is rather small due to the strict regulations imposed on Christian churches by the Ottoman rulers.
Image by Eldelabarca on Wikimedia under Creative Commons License.
7

This church was built in 1838 on the same site as a previous structure of the same name, which was destroyed by fire in 1836. Many beautiful icons are stored here, and the church itself is very ornately decorated. There are beautiful images of flowers, animals, tree leaves and crosses adorning the church walls.
Image by Svilen Enev on Wikimedia under Creative Commons License.