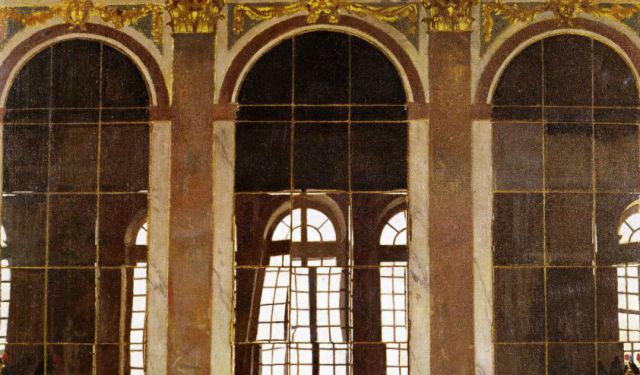 Image by William Orpen on Wikimedia under Creative Commons License.

The town of Versailles is not just about the palace – there are a number of fascinating cultural venues and museums that will enrich your knowledge of French history and creativity. Take our tour to see the most popular cultural venues in Versailles.
How it works: Download the app "GPSmyCity: Walks in 1K+ Cities" from iTunes App Store or Google Play to your mobile phone or tablet. The app turns your mobile device into a personal tour guide and its built-in GPS navigation functions guide you from one tour stop to next. The app works offline, so no data plan is needed when traveling abroad.

If you haven’t got enough time to visit all of Versailles, or if there are too many people queuing up to visit the Chateau, or if you are quite simply overwhelmed by the history of this famous area; then the Musée Lambinet is the place to visit.

The museum is housed in the Hôtel Lambinet, a hôtel particulier, which means a very grand townhouse for the nobility. It was designed in 1751 by Elie Blanchard for Joseph Porchon, a wealthy constructor. On the garden façade the pediment bears a sculpture representing Architecture. The hôtel was built on the site of a drained lake.

In 1852 the townhouse was bought by Jean-François Lambinet, who had been the Mayor of Versailles until 1848. The building was bequeathed to the town by his heirs in 1929 and it became a museum in 1932.

The museum’s 35 rooms have been intelligently divided into three sections: the first part is dedicated to fine arts from the 16th to the 20th century. The second section has a beautiful recreation of an 18th century apartment with decorative art, furnishings and paintings typical of the epoch.

The third section deals with the history of Versailles, its beginnings, its place during the Revolution and the 1st Empire and the influence its inhabitants had on the outcome of the American War for Independence.

You will see maps, plans and charters, all with explications that will help you to understand not only the beauty of Versailles but also the important role the kings of France played in the shaping of our society.


Image by Henry Salomé on Wikimedia under Creative Commons License.
2

You will find the Théâtre Montansier on the Rue des Réservoirs near the Chateau, and even if you don’t want to take in a play, you can still visit this jewel of a theatre.

It was built in 1776 following plans drawn up by the architect Jean-François Heurtier, commissioned by Mademoiselle Montansier. It was built of wood and plaster; the horseshoe shaped auditorium with its three galleries was decorated in blue, white and gold.

The theatre was opened in 1777 with King Louis 16th and Marie-Antoinette as specially honoured guests. It was the earliest theatre to be built at Versailles – the Queen’s theatre was built in 1780 – and it hosted regular performances until 1789.

When the Royal Family was forced to leave the chateau, the theatre was abandoned and fell into ruin until it was bought and restored by the City Council. They refurbished it red, but in 1850 it was restored to its original colours.

The magnificent frescoes on the cupola were painted by Séchan, the stucco work and the female statues on the cornices are the work of Cruchet.

In 1992 the building began to sink into the marshland on which it was built and was reinforced with concrete. At the same time a rehearsal hall was installed in the attics.

Today it is a municipal theatre with both modern and classical plays regularly performed. It is also used for musical concerts and dance recitals.
Image by ℍenry Salomé on Wikimedia under Creative Commons License.
3

3) Royal Opera of Versailles (must see)

The Royal Opera of Versailles is well worth a visit, not only for the beauty its interior, but also for the feeling of stepping back in time. You half-expect to see nobles and their ladies settling into the seats to enjoy a long forgotten opera.

The opera house was built in 1770, designed by Ange-Jacques Gabriel and the interior decorator Augustin Pajou. It seated 712 guests in the oval auditorium and the floor where the orchestra played could be raised to the level of the stage to make more space.

The wooden walls were painted to resemble marble and the decoration was heavily mythological representing the Olympian gods and goddesses. The ceiling canvas executed by Louis Jean-Jacques Durameau featured Apollo and the Muses.

The building was inaugurated on Louis 16th‘s wedding day and the King’s Lodge and Boudoir are excellent examples of what came to be called the “Louis XVI style”.

The opera was closed when the Royal family left Versailles in 1789 and remained unused until 1837, when Louis-Philippe had it renovated. In 1872 it was converted for the use of the Assemblée Nationale who convened here until 1876.

From then until 1879 it was the seat of the Senate. When they left the building it was neglected until 1952 when André Japy carried out extensive renovation work to restore it to its original beauty.
Image by Thesupermat on Wikimedia under Creative Commons License.
4

4) Museum of the History of France (must see)

The Museum of the History of France is spread throughout the Chateau of Versailles and is the largest history museum in the world. To visit in all of it, it is a good idea to pack a picnic and relax in the magnificent gardens between exploring this incredible museum.

King Louis 16th left Versailles in 1789 and during the Revolution the palace and its out-buildings were pillaged and damaged. In 1794 the Convention decided that the estate should be “placed under the care of the Republic for the public good”.

What this really meant was that the palace became a sort of stocking area for all the artwork that had been removed from the nobility’s homes and items taken from royal churches and chapels. All these objects eventually became the nucleus of the museum.

André Dumont was appointed as the curator of the chateau and he quickly appointed experts to catalogue the libraries, the paintings and all the objets d’art, setting them out in chronological order.

Unfortunately, towards the end of the seventeen nineties the chateau became a military hospital and all the upholstery, drapes and tapestries were burnt to recuperate the gold and silver that had been used in their making.

In 1830, when Louis-Philippe became King of France, he restored the chateau as a museum and had several rooms knocked down to form the “Galerie des Batailles” which housed paintings dedicated to French military victories.

In 1887, the curator Pierre de Nolhac was responsible for having the chateau restored to its Pre-Revolution state.

Further work between 1952 and today saw a new roof erected on the Hall of Mirrors, the restoration of the Chambre de la Reine and the Apartments of Louis 14th. The North Wing became the Gallery for French History between the 17th and 19th centuries and a lot of the Pre-Revolution furniture and artwork was recovered for the delight of today’s visitors.
Image by François-Joseph Heim on Wikimedia under Creative Commons License.
5

The Musée du Jeu de Paume is a fascinating museum dedicated to the French Revolution. Built in 1686 for the king and court, it remains in its original location on the street of the same name in the heart of the Saint-Louis district. This building is famous as the location where the oath was delivered on 20 June 1789 by members of the Third Estate, who had been displaced from the Hotel des Menus Plaisirs. This scene has been immortalized by a massive painting by Jacques-Louis David.
Image by BenP on Wikimedia under Creative Commons License.