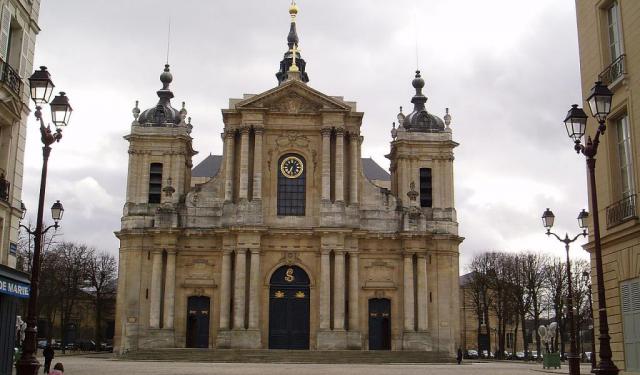 Image by BenP on Wikimedia under Creative Commons License.

Versailles is home to a number of marvelous Christian buildings, some of which date back to the 18th Century. One of the highlights is the Royal Chapel, which hosted many baptisms, weddings and funerals involving the French royal family. Take our tour to visit the most interesting places of worship in the town.
How it works: Download the app "GPSmyCity: Walks in 1K+ Cities" from iTunes App Store or Google Play to your mobile phone or tablet. The app turns your mobile device into a personal tour guide and its built-in GPS navigation functions guide you from one tour stop to next. The app works offline, so no data plan is needed when traveling abroad.

To the right, is the Chapel of Baptism with its fonts, the Chapel of the Presentation of the Saint Virgin and the Chapel of Saint Charles. Beyond the transept, three chapels which surround the quire are dedicated to the Good Minister, to Saint Louis and to Saint John the Baptist.


Image by BenP on Wikimedia under Creative Commons License.
2

The Chapelle Notre-Dame-des-Armées is situated right in the heart of the town, near the Versailles City Hall. Initially this religious building was used as a home for soldiers, hence the name. It was designed by Franz Blondel, who was also the architect of the St. Jean de Bethune school in the town.
Image by Austcanc on Wikimedia under Creative Commons License.
3

The chapel of the Palace of Versailles is an ornate early 18th Century masterpiece. Dedicated to Saint Louis, patron saint of the Bourbons, the chapel was consecrated in 1710. Its upper level, known as the “salon de la chapelle”, is decorated with white stone and a bas-relief sculpture. The floor of the chapel is inlaid with marble, while at the foot of the steps leading to the altar is a crowned monogram of an interlaced double “L”, alluding to both Saint Louis and Louis XIV. During the 18th Century, the chapel witnessed many official events. Hymns were sung here to celebrate military victories and royal births, for example. Marriages were also celebrated in this chapel, such as the wedding of Louis XV’s son Louis-Ferdinand with the Infanta Marie-Thérèse of Spain in 1745, and the wedding of the would-be Louis XVI with Marie-Antoinette in 1770.
Image by Diliff on Wikimedia under Creative Commons License.
Sight description based on wikipedia
4

Although the Eglise Notre-Dame isn’t as grand as the cathedral, it is by far more lavishly decorated and less austere.

The church was commissioned by Louis 14th in 1686 and built by Maurice Gabriel on plans by Jules Hardouin-Mansart. It is 80 metres long, 34 metres wide and 19 metres high under the vault.

The sculptures in the quire of Faith and Hope were installed in 1786; the bas-reliefs of Religion and Charity were carved a little later.

The nave is wide with a barrel vault ceiling. Only the paneling, the organ case and the pulpit are the originals, the rest of the furnishing was destroyed during the French Revolution. The pillars are decorated with marble medallions of Mary Magdalen and the 12 Apostles; they were created by the Royal Academy of Painting and Sculpture, which is now a part of the Academy of Beaux-Arts.

The marble statue of Christ by Magmer came from the Priory of Longjumeau in 1695. In the Chapel of the Sacred Sacrament you can admire a painting of The Assumption by Michel Corneille. In the Mansart Chapel there is an embroidered silk banner donated by Pope Pius 6th which was hidden during the French Revolution.

Another prized possession that survived the Revolution is the fine cenotaph raised for Louis 16th’s Foreign Minister, Vergennes, who died in 1787. There is another memorial of note that contains the heart of General Hoche.
Image by Velvet on Wikimedia under Creative Commons License.
5

The Eglise Sainte Jeanne d'Arc is a beautiful church dedicated to Joan of Arc. Dating from 1914, it was first a Nordic style wooden chapel. Nowadays, the church is also a memorial to locals who died during World War I.
Image by ℍenry Salomé on Wikimedia under Creative Commons License.
6

The Chapelle Saint Joseph de Glatigny is a large chapel with many rooms that have housed dozens of monks for decades. Begun in 1923, the building was blessed in 1934 by Bishop Roland Gosselin. It was originally located on the site of the present Trianon Palace, although the two are not connected.
Image by Renardeau on Wikimedia under Creative Commons License.
7

This splendid religious building dates from 1900. The Eglise Saint-Antoine features a large altar which is made in marble, bronze, onyx and enamel. Look out for the magnificent windows at this beautiful house of worship.
Image by Emmanuel BRUGERON on Flickr under Creative Commons License.
8

The Eglise Notre-Dame-de-la-Résurrection, or Church of Our Lady of the Resurrection, is a beautiful church on the Avenue du Docteur Schweitzer. This modern religious building was opened in 1970, with many contemporary features such as its green and white walls.
Image by ℍenry Salomé on Wikimedia under Creative Commons License.