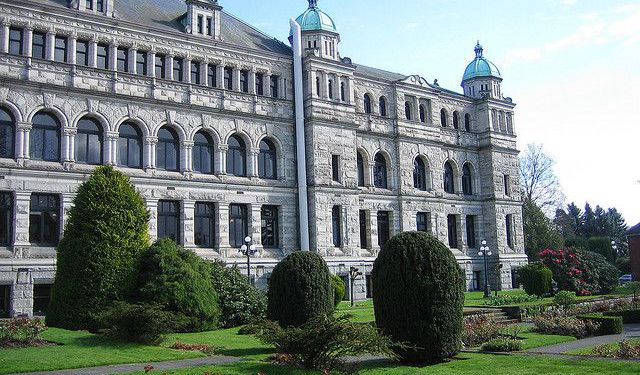 Image by Dustin DeKoekkoek on Flickr under Creative Commons License.

Victoria is a major tourist destination located in British Columbia and is known to contain some of the finest British style architecture in Canada. The tour below will take you through some of the day to day routine of the locals, so enjoy!
How it works: Download the app "GPSmyCity: Walks in 1K+ Cities" from iTunes App Store or Google Play to your mobile phone or tablet. The app turns your mobile device into a personal tour guide and its built-in GPS navigation functions guide you from one tour stop to next. The app works offline, so no data plan is needed when traveling abroad.

George Jay Elementary School is a very old local school in Victoria, its history going back to 1909. It used to be one of the biggest elementary schools in British Columbia. The school continues to attract students. A book about the history of the school was recently published.
Image by striatic on Flickr under Creative Commons License.
4

Royal Athletic Park is a multi-purpose, fully lit stadium. It is primarily used for baseball, soccer, softball and football, but also hosts special events, such as the annual Great Canadian Beer Festival.

The park has a permanent seating capacity of 4,247. Depending on its configuration and the event, it can hold a larger capacity, often listed as a max capacity of 9,247. Temporary bleachers were added to expand seating for the 2007 FIFA U-20 World Cup games. An announced total of 14,500 was later altered to 10,500, as temporary grandstands were not erected behind the goal on the east side.

Image by Ureinwohner on Wikimedia under Creative Commons License.
Sight description based on wikipedia
5

Roxy Theater is a local movie theater popular among locals. It has a pretty interesting program and all the regular facilities of a movie theater. Also, they have some discounts for weekends.
Image by Looking Glass on Flickr under Creative Commons License.

Victoria's nightlife is diverse and bursting with vitality. We propose that you take a walk through some of the most interesting nightclubs in Victoria and choose the one that suits your taste the best.

Victoria is the capital city of British Columbia and a major tourist destination. There is a range of fascinating attractions for your children. Just take the tour below and visit some of these attractions that will entertain your children for sure.