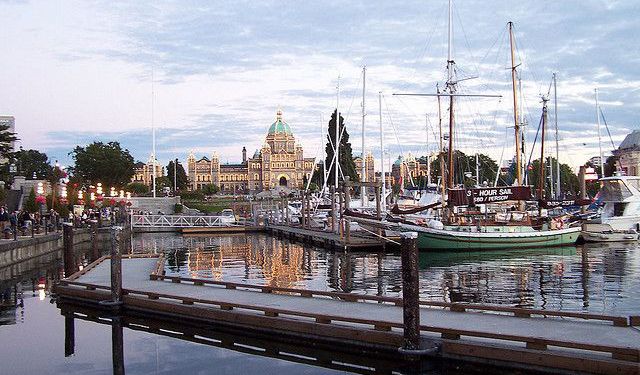 Image by anneh632 on Flickr under Creative Commons License.

Victoria located in British Columbia has a rich history and interesting people to tell it. It also has some outstanding religious sights. We offer, below, a tour that will take you through some of the most interesting religious places in Victoria.
How it works: Download the app "GPSmyCity: Walks in 1K+ Cities" from iTunes App Store or Google Play to your mobile phone or tablet. The app turns your mobile device into a personal tour guide and its built-in GPS navigation functions guide you from one tour stop to next. The app works offline, so no data plan is needed when traveling abroad.

Like so many of the world’s cathedrals, this building took a century to construct and is vastly different from the original conception.

This is the third Cathedral Church, the seat of the Bishop of the Anglican Diocese of British Columbia, replacing two earlier buildings that stood across the road where the Law Courts building now stands. The old cathedral property was eventually sold to the province for the courthouse, but the Cathedral Close still comprises an entire city block-Quadra, Rockland, Vancouver, Burdett.

The architect Keith himself called the cathedral Gothic Revival, acknowledging a debt to medieval English cathedrals. The style is highly traditional, with the visual emphasis being on the imposing West End, towering over “Church Hill,” intended to be visible for miles. Worshippers enter through six sets of double doors, leading through a vestibule (the narthex) into the vast nave, with a sanctuary at the East end, facing Jerusalem. The nave, as finished, is one of the largest in Canada, at 93’ x 140’. Medieval-style texts are painted on interior walls, and other texts are cast in a ribbon around the top of the walls outside.

Why You Should Visit:
For gothic architecture, this is really a beautiful structure – flying buttresses, beautiful beams, and gorgeous stained glass.
Surrounded by the splendor of well-kept grounds and cemetery. There is even a labyrinth on the side of the building.

Tip:
Ask the stewart on duty for the free self-guided tour pamphlet. If you ask nicely, the stewart will also open the Columbarium for you.
The cathedral is known as a frequent venue for concerts and recitals, so check their schedule.


Image by HighInBC on Wikimedia under Creative Commons License.
Sight description based on wikipedia
2

3) Church Of Our Lord

Church Of Our Lord is one of the oldest religious congregations in Victoria. It was established way back in 1874. The church is a beautiful architectural structure of Gothic style and has a great organ. The Church Of Our Lord has been declared a Federal Heritage Building.
Image by jmv on Flickr under Creative Commons License.
4

St. Andrew's Presbyterian Church was established in 1866 and is located in an impressive building with an amazing tower and huge doors, in Downtown Victoria. The structure was built in the Scottish Baronial style.
Image by Brandon Godfrey on Flickr under Creative Commons License.
5

St. Andrew's Cathedral is the Roman Catholic cathedral for the diocese of Victoria. Built in the High Victorian Gothic style, St. Andrew's was Victoria's third cathedral to be built. (The first, 1858–1884, is now the Chapel of St. Ann's Academy on Humboldt Street; the second, 1884–1892, was on the site behind the current building now occupied by the St. Andrew's Square office building.)

Construction for the new cathedral began in 1890. At 8:00 am on October 30, 1892, Bishop Lemmens blessed the building before Pontifical High Mass was celebrated at 10:00am. The cathedral has been a National Historic Site of Canada since 1990.
Image by Drhaggis on Wikimedia under Creative Commons License.
Sight description based on wikipedia
6

Temple Emanuel is one of the oldest synagogues in Canada. It was established in 1863. The synagogue has a lot of social activities and is also open to tourists. The building was designed by John Wright and is a National Heritage Building.
Image by Lotus on Flickr under Creative Commons License.
7