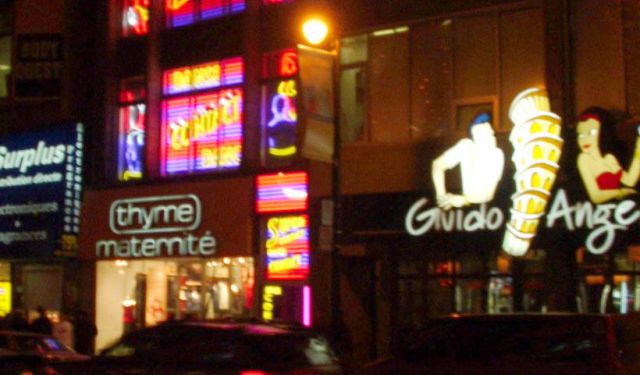 Image by Zanastardust on Flickr under Creative Commons License.

Montreal is a vibrant, multicultural city, offering fascinating nightlife options. The choice of bars, dance clubs and lounges is fabulous. Take the walking tour suggested below to experience the most exciting nightclubs in Montreal.
How it works: Download the app "GPSmyCity: Walks in 1K+ Cities" from iTunes App Store or Google Play to your mobile phone or tablet. The app turns your mobile device into a personal tour guide and its built-in GPS navigation functions guide you from one tour stop to next. The app works offline, so no data plan is needed when traveling abroad.

The ultimate nightlife venue for Montreal’s gay community, Complexe Sky offers multiple levels of entertainment to its guests seven days a week. The ground level features a restaurant and bar, while the second floor hosts cabaret and drag shows, with free admission before midnight. The third floor is where all the action takes place, offering a spacious dance floor and DJs spinning hot club beats all night long, including house, tribal, hip hop, and top 40 favorites. Finally, the rooftop terrace features a pool and spa, and its own full service bar, as well as a spectacular view of the Montreal cityscape.

Image by oknidius on Flickr under Creative Commons License.
2

A massive nightclub and haven for the city’s gay community, Club Unity Montreal offers three levels of entertainment, each space with its own distinct party atmosphere. The main room features the best in local and international DJs spinning the hottest club mixes while guests dance the night away on its spacious dance floor. There is also a more casual lounge area located in the heart of the club where guests can relax from dancing. The Bamboo Bar features a smaller dance floor and top 40 favorites playing to the crowd, while the exclusive VIP room can be reserved for the ultimate service and a view over all the action on the main floor. The outdoor terrace offers a pleasant respite and also offers a great view of the Montreal skyline.
Image by migpascual on Flickr under Creative Commons License.
3

Also found in the Village district, a gay-friendly area of Montreal, Circus offers guests an outrageous and unforgettable evening under the big top. With parties going until midday the next afternoon, top-hatted doormen dressed as ringleaders pull scores of guests in for a night of burlesque, magic acts, and the best DJs spinning all night long. Three different rooms serve up distinct sounds which include dark house, tribal beats, electro, hip hop, and R and B. The environs of Circus include exposed brick walls, hardwood floors, extravagant lights and a state-of-the-art sound system to ensure a truly over-the-top party experience for its guests.

Image by Cordey on Flickr under Creative Commons License.
4

Opened by DJ and producer Angel Moraes who also designed the club’s state-of-the-art sound system, Stereo was first opened in 1998. The dance floor is equipped with shock absorbers in order to ensure maximum comfort for dancers and keep them going all night long. Its simple industrial design features simple black walls and a large disco ball, with elevated levels overlooking the action on the main floor. Stereo features some of the hottest local and international talent spinning as both resident and guests DJs, and attracts a crowd consisting of both gay, straight, English and French-speaking.
Image by Alex Miranda on Flickr under Creative Commons License.
5

Both a club and live music venue, Foufounes Électriques, which literally translates into “Electric Buttocks” first opened its doors back in 1983, featuring art and cultural events attracting a hip bohemian set to its environs. It quickly became a haven for burgeoning alternative scene, including a bevy of underground sounds such as industrial, grunge, reggae, hip hop, punk, goth, and more. Over the years Foufounes Électriques has hosted live performances from many renowned recording artists, including Queens of the Stone Age, Nirvana, Green Day, legendary writer and counterculture icon William S. Burroughs, and more.
Image by Jeangagnon on Wikimedia under Creative Commons License.
6

Club Soda is a music venue in Montreal, Quebec. First opening its doors back in 1983 with a performance by Boule Noire, Club Soda in its previous location on Park Avenue and in its present incarnation on Saint Laurent Boulevard serve up some of the best live underground music acts, including punk, metal, hip hop and more, including acts of local, regional, and international appeal. It has also been the host of the city’s Jazzfest. Other special events include a fantastic New Year’s Eve party that really packs in a crowd. In addition to the main level with dance floor, there is also a balcony wrapping around the interior offering a view of the stage and action taking place below.
Image by Jeangagnon on Wikimedia under Creative Commons License.
Sight description based on wikipedia
7

Tucked away in an underground location found on Rue Saint-Gabriel in Old Montreal, Le Velvet Speakeasy can be found in the historic Old Montreal section of the city. The intimate environs of this club include a long cobblestone corridor with two bars on either end. This nightclub attracts a hip crowd of partiers which includes fashionistas, models, designers, artists, and other trendsetters. Le Velvet Speakeasy hosts night of hot beats provided by some of the biggest names in the industry from around the globe, including sounds ranging from house and techno, to pop and electro. The upstairs features a restaurant and a bar, which is the perfect place to get ready before an evening on the main floor and dance the night away.

Image by Evan Wood on Flickr under Creative Commons License.

Montreal is a wonderful city blessed with many examples of great French culture. Among them are Montreal's museums and galleries, which offer a diverse view of the local and international culture that flows through the city. Take this walking tour to explore the most exciting exhibitions of Montreal's museums.