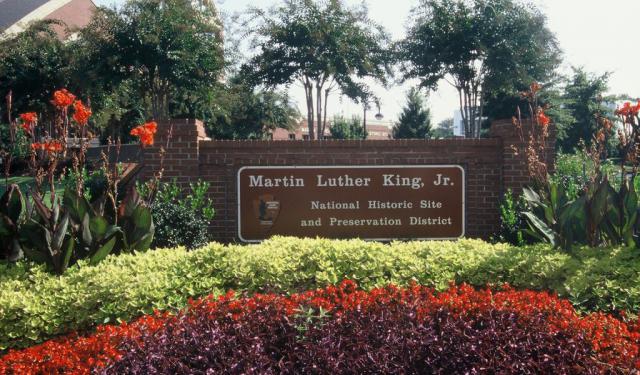 Image by jramspott on Flickr under Creative Commons License.

Walking Around Galleries and Museums in Atlanta (Self Guided), Atlanta

Atlanta is a giant contemporary art venue. It has a lot of galleries and renowned museums that range from very casual and approachable to large and internationally acclaimed featuring only the top names. Having a great mix of historic and thought provoking museums, Atlanta is a wonderful place to visit. This walking tour will lead you to some of the most famous galleries and museums in the city.
How it works: Download the app "GPSmyCity: Walks in 1K+ Cities" from iTunes App Store or Google Play to your mobile phone or tablet. The app turns your mobile device into a personal tour guide and its built-in GPS navigation functions guide you from one tour stop to next. The app works offline, so no data plan is needed when traveling abroad.

Located in a wonderful neighborhood, Atlanta Contemporary Art Center is devoted to presenting the latest artworks by both national and international artists. It features different thematic shows that will definitely amaze you. If you're looking for the weirdest art in town, this is the place to be. The Atlanta Contemporary Art Center is a non-profit, non-collecting institution located in the West Midtown district of Atlanta. ACAC is dedicated to the creation, presentation, and advancement of contemporary art by emerging and established artists. It creates a diverse cultural landscape for artists, arts professionals, and the art-interested public through its exhibitions, educational programs, and studio artist program. ACAC presents 6-10 exhibitions per year featuring consequential artists from the local to international art scenes, and is one of the few Atlanta institutions that commissions new works by artists, paying particular attention to artists of note who have not had a significant exhibition in the Southeast. ACAC organizes approximately 50 diverse educational programs a year, and provides on-site, subsidized studio space to 14 working artists through its Studio Artist Program. Thanks to corporate sponsorship, ACAC is free to the public every Thursday with extended hours and programming removing time and cost as barriers to participation.
Image by Tendril on Wikimedia under Creative Commons License.
Sight description based on wikipedia
2

The Georgia Aquarium houses more than a hundred thousand animals and represents several thousand species, all of which reside in 10 million US gallons (38,000 m3) of marine and salt water. It was the largest aquarium in the world from its opening in 2005 until 2012, when it was surpassed by Marine Life Park in Singapore. Businessman Bernard Marcus credits his 60th birthday dinner, held at the Monterey Bay Aquarium, with inspiring him to build a great aquarium for Atlanta; his subsequent $250 million donation provided the bulk of the money needed to build and stock the new facility.

After 27 months of construction, the Aquarium opened on November 21, 2005, with 60 animal habitats. Its notable specimens include whale sharks, beluga whales, California sea lions, bottlenose dolphins, and manta rays. Though the non-profit Aquarium's admission charges are among the highest in the United States, attendance has far exceeded expectations, with one million visitors in the first hundred days, three million by August 2006, five million by May 2007, and ten million by June 2009.

Why You Should Visit:
To experience all the world's major marine ecosystems in a single place – mostly via spectacular large displays and sometimes pop-up viewing stations/crawl spaces.
From the Arctic waters where you'll see Beluga whales and Penguins to tropical seas where there's everything from Seahorses to Stingrays and Sharks.

Tip:
Buy your tickets online as it is a better deal – some discounts there cannot be purchased in person.
Consider paying a little extra to do the backstage tour – well worth the money and great for all ages.


Image by Diliff on Wikimedia under Creative Commons License.
Sight description based on wikipedia
3

World of Coca-Cola showcases the history of the Coca-Cola Company. It is a popular entertainment and attractions area. The 20-acre (81,000 m2) complex is located across Baker Street from Centennial Olympic Park and is also home to the Georgia Aquarium and the Center for Civil & Human Rights. It opened to the public on May 24, 2007, relocating from and replacing the original exhibit.

The museum features exhibits about the secret formula of Coca-Cola, a 4D movie where an intrepid scientist and his assistant set out to find the secret for themselves (featuring actors James Meehan and Jameelah Silva), and allows visitors to taste 60 different flavors from around the world. It also houses a fully functional bottling line that produced 8-ounce bottles of Coca-Cola for distribution to its guests. However, citing operation costs, since 2013, the plant runs in simulation as such practice was discontinued.

Why You Should Visit:
Tons of Coca-Cola paraphernalia and memorabilia, and you are given a virtually unlimited supply of Coca-Cola beverages from around the world to taste.

Opened in 2003, Imagine It! Museum inspires the younger generation to tread the path of imagination and discovery. It accomplishes this through the power of play. Being designed specifically for the children age eight and under, the museum has a broad variety of hands-on activities. It has plenty of educational and entertaining areas your children can explore, with topics ranging from Math and Science to Language, Arts and Social Studies. This is a delightful place to bring your little ones to.
Image by Svadilfari on Flickr under Creative Commons License.
5

This landmark contains multiple buildings that surround Dr. King's childhood home. They include the Ebenezer Baptist Church, King's grave and the famous Sweet Auburn district. You can also visit the "I Have a Dream" International World Peace Garden, King's boyhood home and the Visitors' Center that has a permanent exhibition on the American Civil Rights Movement. This is a true world heritage of human freedom that should be experienced by everybody.

Tip:
If you want to tour MLK's birth home, arrive early (9 a.m. / 11 a.m.) to get a ticket at the visitor center. The tours are limited to 15 people at a time and are about 40 minutes long.
You can spend money in the various gifts shops, but all of the historical displays and programming are free of charge.

Located in an old building dating back to 1893 and endowed with an exquisite design, the Whitespace Gallery is a favorite with many in Atlanta. Founded by Susan Bridges, it exhibits both established and new artists. Having gorgeous opening celebrations, you definitely don't want to miss this venue.
Image by BurnAway on Flickr under Creative Commons License.
7

Opened in 1986, the Jimmy Carter Library and Museum features a comprehensive archive of materials connected to Carter's life and his administration and is home to a full-scale duplicate of the Oval Office including the Resolute Desk. The museum also hosts a large number of exhibits that will definitely entertain any visitor. The Carter Library and Museum includes some parts that are owned and administered by the federal government and some that are privately owned and operated. The building housing the library and museum makes up 69,750 square feet (6480 m²), with 15,269 square feet (1419 m²) of space for exhibits and 19,818 square feet (1841 m²) of archive and storage space. The library stacks house 27 million pages of documents; 500,000 photos, and 40,000 objects, along with films, videos, and audiotapes. These collections cover all areas of the Carter administration, from foreign and domestic policy to the personal lives of President and Mrs. Carter.

Why You Should Visit:
Lots of great information here, not only about Jimmy Carter and his background but also the context of what was happening in America at the time.
The grounds are full of tall trees and beautifully landscaped with flowers, water features, a few sculptures, and a great view of Atlanta's skyline.
The Oval Office replica is a pretty unique attraction – when are you ever going to get to see the real thing anyway?
Also has a gift shop where you can buy POTUS seal branded stuff and other knick-knacks.

Tip:
Don't skip the opening film. It's short, sweet, and gives you a great overview.