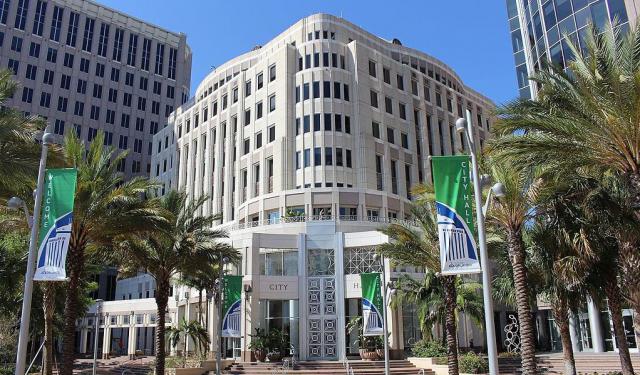 Image by turtlemom4bacon on Flickr under Creative Commons License.

Although Orlando is not a city known for any world-famous architectural masterpieces, it does have a few buildings whose structural designs are worth being seen. The main architectural landmarks are located in the downtown area of the city, so follow this guide to get familiar with them.
How it works: Download the app "GPSmyCity: Walks in 1K+ Cities" from iTunes App Store or Google Play to your mobile phone or tablet. The app turns your mobile device into a personal tour guide and its built-in GPS navigation functions guide you from one tour stop to next. The app works offline, so no data plan is needed when traveling abroad.

Orlando's City Hall is a government building located in the downtown district. This concrete and granite structure was designed using a typical Southern United States style of architecture, which features beige buildings with green roofs. City Hall is crowned by a beautiful 12-foot copper dome and contains 10 stories, 2 grand staircases, and two galleries.
Image by Sweet One on Flickr under Creative Commons License.
2

Located in Central Business District, in Downtown Orlando, the SunTrust Center is a three-building complex. At 441 feet, it is the tallest skyscraper in the city. Construction was completed on the building in 1988. It was originally built to house the offices of the SunTrust Bank. The latter, however, left the building in 2009 as part of a downsizing measure.

Originally named the Sun Bank Center, this 640,000 square foot postmodern-style building has 35 stories, 30 floors, a six-level parking garage, a restaurant, and an eight-story atrium. Other amenities include an on-site sundry shop, shoe shine service, and a jewelry store. It is home to the consulates of Argentina and Great Britain and houses the trade offices of Qingado, China.

Other major tenants include Holland and Knight Law and Baker and Hostetler Law. The top five floors allow a stunning panoramic view of downtown Orlando. Unfortunately, the top five floors are not accessible to the public. The building is conveniently located near the LYMMO route.

Each year the American Lung Association’s Annual “Fight for Air Climb-Orlando Event” takes place at the complex. Contestants are timed as they run up 25 stories of stairs. The event has raised over US$100,000 for charity.

Image by Imagempt on Wikimedia under Creative Commons License.
3

Visiting hours are Monday through Saturday from 10 am to 5 pm and Sunday from 12 pm to 5 pm. The Docent Program hosts museum expeditions and gives volunteers of the museum’s history center.
Image by Ebyabe on Wikimedia under Creative Commons License.
4

St George Orthodox Church lies in the heart of downtown Orlando. With its impressive design and classic columns, the church has become an icon of the downtown area. The incredible Eastern Altar is used for weekly Vespers and Orthros Services. The church welcomes members of all Orthodox Christian backgrounds.
Image by Ebyabe on Wikimedia under Creative Commons License.
5

Bank of America at duPont Centre is a skyscraper that stands 404 feet tall. This tower was once a condo that eventually evolved into a skyscraper. Making this structure unique are 3 setbacks, which are on the same side of the building and positioned in such a way that it resembles a huge right triangle. The 28-story building combines both classical and contemporary styles.
Image by NathanF on Flickr under Creative Commons License.

Orlando has a very diverse history and most of its museums depict the historical evolution of Orlando and the state of Florida. Most of the museums are located in the downtown area and are surrounded by a plethora of smaller attractions. The following tour will take you through some of the city's best museums, such as the Orlando Museum of Art, Mennello Museum, and Cornell Museum of Fine...  view more

In recent years Downtown Orlando, the city's cultural, historic and commercial center, has seen much renovation done in a bid to stimulate tourism. This tour takes you to some of the city's most prominent museums, historic sites, and other places of interest, including Lake Eola Park, a firm favorite among the locals recreation spot. Take your time to explore Downtown Orlando and enjoy...  view more