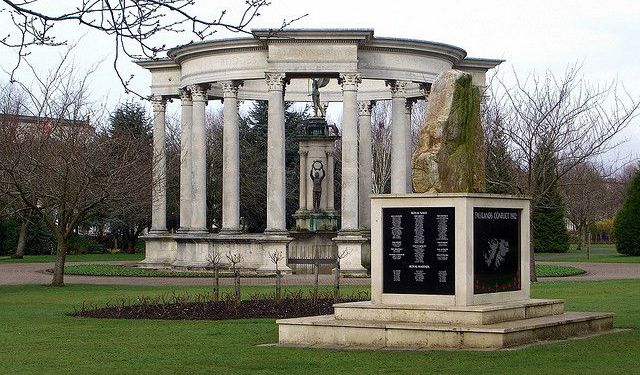 Image by mark.hogan on Flickr under Creative Commons License.

Cathays Park, also known as Cardiff Civic Centre, is the core of the Welsh Capital city. Central park area of Alexandra Gardens park is surrounded by late 19th century's stunning construction including Cardiff City Hall, Temple of Peace, Cardiff University and National Museum of Wales. Take this self-guided walking tour to discover Cardiff's most beloved landmarks.
How it works: Download the app "GPSmyCity: Walks in 1K+ Cities" from iTunes App Store or Google Play to your mobile phone or tablet. The app turns your mobile device into a personal tour guide and its built-in GPS navigation functions guide you from one tour stop to next. The app works offline, so no data plan is needed when traveling abroad.

National Museum Cardiff is a museum and art gallery in Cardiff, Wales. The museum is part of the wider network of Amgueddfa Cymru – National Museum Wales (formerly the National Museums and Galleries of Wales). Entry is free thanks to a grant from the Welsh Assembly Government. The National Museum of Wales was founded in 1907, when it inherited the collection of the Cardiff Museum, which shared the building of Cardiff Central Library. Construction of a new building in the civic complex of Cathays Park began in 1912, but owing to the First World War, it did not open to the public until 1927. The architects were Arnold Dunbar Smith and Cecil Brewer, although the building as it now stands is a heavily truncated version of their design. The museum has collections of archaeology, botany, fine and applied art, geology and zoology.

Image by TFDuesing on Flickr under Creative Commons License.
Sight description based on wikipedia
2

City Hall is a civic building in Cathays Park, Cardiff. Built of Portland stone, it became the fifth building to serve as Cardiff's centre of local government when it opened in October 1906. The competition to design a town hall and adjacent law courts for Cardiff was won in 1897 by the firm of Lanchester, Stewart and Rickards. Construction was carried out by local builders, E. Turner and Sons. Cardiff received its city charter while construction was underway, in 1905. The building is an important early example of the Edwardian Baroque style.
Image by Yummifruitbat on Wikimedia under Creative Commons License.
Sight description based on wikipedia
3

Cardiff’s Crown Court building was built in 1904 in Portland stone, in French Renaissance architectural style. For many years, the country’s major criminal cases had been heard here. The beautiful architectural features of the rear of the building such as coats of arms carvings and statues, complement the modest façade. Don’t miss a truly magnificent building of Wales Circuit of Crown Court.
Image by Seth Whales on Wikimedia under Creative Commons License.
4

The Glamorgan Building is an Edwardian former county hall located in Cardiff in the prestigious civic centre in Cathays Park, on King Edward VII Avenue. Formerly the county hall of Glamorgan, the building was acquired by Cardiff University in 1997 and is now home to the School of Social Sciences and the School of City and Regional Planning. It is one of the most architecturally-distinguished buildings in the University's care. It was designed by Vincent Harris OBE and Thomas Anderson Moodie, who won the design competition for the building in 1909. The project was completed in 1911 and the building was opened in 1912. Outside the building, serving as reminders of the county's source of wealth, are two groups of statues by Albert H. Hodge, one representing navigation and the other coal mining.

Image by Seth Whales on Wikimedia under Creative Commons License.
Sight description based on wikipedia
5

Bute Building is occupied by Cardiff University and is a grade II listed building in Cathays Park, Cardiff, Wales. It currently houses the Welsh School of Architecture and the Cardiff School of Journalism, Media and Cultural Studies. The neoclassical building was designed by Sir Percy Thomas and Ivor Jones, who won a competition to design a building for Cardiff Technical College in 1911. The foundations of the building were laid in 1913 and the building opened in 1916. The building has six Roman Doric columns in the front of the building and includes the Birt Acres Lecture Theatre.
Image by Eirian Evans on Wikimedia under Creative Commons License.
Sight description based on wikipedia
6

Cardiff University is a research university located in the Cathays Park area of Cardiff. It received its Royal charter in 1883 and is a member of the Russell Group of Universities. The university is consistently recognised as providing high quality research-based university education in Wales. In the 2008 Research Assessment Exercise, almost 60 per cent of all research at Cardiff University was assessed as world-leading or internationally excellent – 4 and 3 the top two categories of assessment.

Ranked number 122 of the world's top universities, Cardiff University celebrated its 125th anniversary in 2008. Before August 2004, the university was officially known as University of Wales, Cardiff, although it used the name Cardiff University publicly.
Image by Stan Zurek on Wikimedia under Creative Commons License.
Sight description based on wikipedia
7

The Welsh National Temple of Peace and Health, also known as the Temple of Peace, is a non-religious civic building in the civic centre of Cardiff, Wales. It was designed by the architect Sir Percy Thomas. The Temple of Peace was opened on 23 November, 1938. It was a gift from Lord Davies to the Welsh people. He wanted it to be “a memorial to those gallant men from all nations who gave their lives in the war that was to end war” and so it was dedicated to the memory of the loss of life as a result of the 1914 - 1918 War. The building, built in the form of the letter ‘T’, has two wings. Made out of Portland stone, the roofs of the wings are dark red, Italian pattern tiles. You can hardly miss the large pillars facing you as you enter. Behind these columns of portico are three large windows, above which are panels depicting figures representing health, justice and peace. The arms of England, Scotland, Ireland and Wales can also be seen.
Image by Seth Whales on Wikimedia under Creative Commons License.
Sight description based on wikipedia
8

The Redwood Building is part of Cardiff University, and is situated in the Cathays Park area of Cardiff, Wales. Opened in 1960, it was named after Theophilus Redwood, a founding father of the Pharmaceutical Society of Great Britain. Above the entrance, a large relief sculpture shows an elderly toga-clad person, surrounded by books and a globe, reaching out protectively over a youthful scientist and a nurse. The building was part of the University of Wales Institute of Science and Technology (UWIST), which merged into the University of Wales College Cardiff.
Image by Seth Whales on Wikimedia under Creative Commons License.
Sight description based on wikipedia
9

Aberdare Hall is one of the halls of residence serving students at Cardiff University. The Hall was established by the University College of South Wales and Monmouthshire in 1883, for female students. Its foundation was at a time when opportunities for women in higher education were few. The Hall owed most to the efforts of Lady Aberdare (1827-1897) and John Viriamu Jones, principal of the University College, 1883-1901 who, with his wife, took a keen interest in its establishment and management. Lady Aberdare was a proponent of higher education for women, and took an active part in ecclesiastical, social and educational matters. She served as a member of the University College Council and Court of Governors.

The first Hall was located in Keswick House, Richmond Road, Cardiff, and opened in 1885, with nine students. The Hall benefited from the service of its principals, notably Ethel Hurlbatt from 1892-1898, and her sister, Kate. Ethel went on to become Principal of Bedford College in the University of London. The present Hall opened in 1895, designed by W. D. Caroe in brick and terra-cotta and paid for by public subscription. It was the second university residence solely for women in Britain. Later on the hall was extended and Library Wing and Garden Wing were created to accommodate more students. It is still a female-only hall.
Image by Cardiffbiology on Wikimedia under Creative Commons License.
Sight description based on wikipedia