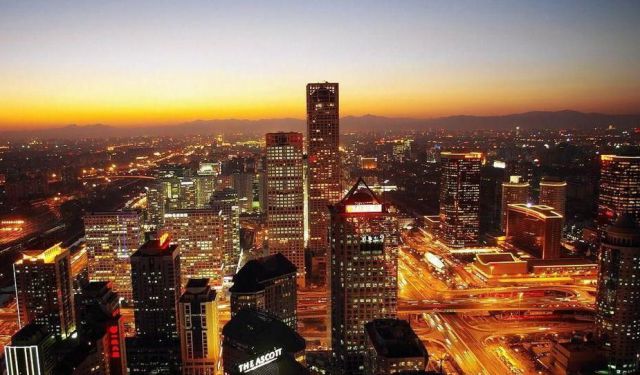 Image by CobbleCC on Wikimedia under Creative Commons License.

Beijing is one of the most beautiful cities in the world, with a great history of more than 2000 years. The majority of buildings in the city preserve that history, though you will notice a fast rising number of modern buildings emerging with impressive design, size and shape. Check out the famous modern architecture of Beijing in the next self-guided tour:
How it works: Download the app "GPSmyCity: Walks in 1K+ Cities" from iTunes App Store or Google Play to your mobile phone or tablet. The app turns your mobile device into a personal tour guide and its built-in GPS navigation functions guide you from one tour stop to next. The app works offline, so no data plan is needed when traveling abroad.

Jing Guang Center is a beautiful modern building erected in 1990 and was the tallest building in China until 1996. The 53-story building measures 208 meters high and is in the Beijing CBD.
Image by Ivan Walsh on Flickr under Creative Commons License.
2

The CCTV Headquarters is a 234 m (768 ft), 44-storey skyscraper on East Third Ring Road, Guanghua Road in the Beijing Central Business District (CBD). The tower serves as headquarters for China Central Television (CCTV). Groundbreaking took place on June 1, 2004 and the building's facade was completed in January 2008. After the construction having been delayed as result of a fire which in February 2009 engulfed the adjacent Television Cultural Center, the Headquarters has been finally completed in May 2012. The main building is not a traditional tower, but a loop of six horizontal and vertical sections covering 473,000 m2 (5,090,000 sq ft) of floor space, creating an irregular grid on the building's facade with an open center. The construction of the building is considered to be a structural challenge, especially because it is in a seismic zone. Because of its radical shape, it's said that a taxi driver first came up with its nickname dà kùchǎ, roughly translated as, "big boxer shorts". Locals often refer to it as "big pants". The CCTV Headquarters won the 2013 Best Tall Building Worldwide from the Council on Tall Buildings and Urban Habitat.
Image by Iamdavidtheking on Wikimedia under Creative Commons License.
3

China World Trade Center Tower III is a supertall skyscraper with 81 floors, 4 underground floors, and 30 elevators in Beijing. It is the third phase of development of the China World Trade Center complex in Beijing's central business district of Chaoyang. The building topped out at 330 m (1,083 ft) on 29 October 2007 and completed in 2010. It is the tallest building in Beijing. It is used for office and hotel space, with retail at its base. The building houses a 278-room 5-star hotel, a 1,600-seat grand ballroom and a carpark. The office space is located on floors 1 to 55. Floors 64 to 77 are occupied by the hotel with a lobby on the 64th floor. Floors 79 to 81 are used for a restaurant and an observation deck.
Image by poeloq on Flickr under Creative Commons License.
4

China World Trade Center Tower 2 can be found in the Beijing Central Business District, or Beijing CBD as it is known to locals. The tower was constructed in 1999, stands 155.1 meters high and hosts a great number of offices.
Image by poeloq on Flickr under Creative Commons License.
6

The city's Yintai Office Tower, or Yintai Office Centre, is located in the heart of Beijing's Central Business District. It is yet another 3-tower complex, the central tower standing the tallest at 250 meters high. The two outside towers stand at a height of almost 186 meters each. This Beijing landmark was designed by the famous architect John Portman.
Image by CobbleCC on Wikimedia under Creative Commons License.
7

BTV (Beijing TV Centre) is a 41-floor skyscraper with a total height of almost 239 meters. This modern glass and steel construction, which was completed in 2006, is the work of acclaimed architect Rem Koolhaas.
Image by poeloq on Flickr under Creative Commons License.
8