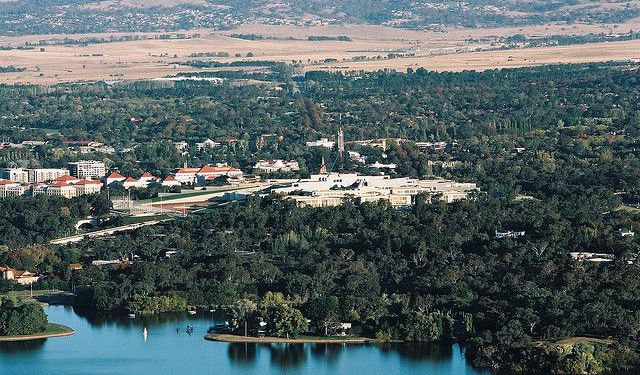 Image by Eugene Regis on Flickr under Creative Commons License.

On your visit to Australia's capital, why not put a day aside for taking a trip to the south part of Canberra. Here you can spend a day dedicated to relaxing outdoor activities. Look out for the popular markets where you can buy a handmade basket and fill it up with great Australian fruits and other picnic products. You can then take your basket to the beautiful Telopea Park or the Lake Burley Griffin. You can also visit a museum, a gallery and a workshop.
How it works: Download the app "GPSmyCity: Walks in 1K+ Cities" from iTunes App Store or Google Play to your mobile phone or tablet. The app turns your mobile device into a personal tour guide and its built-in GPS navigation functions guide you from one tour stop to next. The app works offline, so no data plan is needed when traveling abroad.

Lake Burley Griffin is an artificial lake in the centre of Canberra, the capital of Australia. It was completed in 1963 after the Molonglo River—which ran between the city centre and Parliamentary Triangle—was dammed. It is named after Walter Burley Griffin, the American architect who won the competition to design the city of Canberra.

Griffin designed the lake with many geometric motifs, so that the axes of his design lined up with natural geographical landmarks in the area. The lake is located in the approximate geographic centre of the city, and is the centrepiece of the capital in accordance with Griffin's original designs. Numerous important institutions, such as the National Gallery, National Museum, National Library, Australian National University and the High Court were built on its shores, and Parliament House is a short distance away. Its surrounds, consisting mainly of parklands, are popular with recreational users, particularly in the warmer months. Though swimming in the lake is uncommon, it is used for a wide variety of other activities, such as rowing, fishing, and sailing. The lake is an ornamental body with a length of 11 kilometres (6.8 mi); at its widest, it measures 1.2 kilometres (0.75 mi). It has an average depth of 4 metres (13 ft) and a maximum depth of about 18 metres (59 ft) near the Scrivener Dam.

Image by Sam Ilić on Flickr under Creative Commons License.
Sight description based on wikipedia
2

Telopea Park is one of the oldest parks in Canberra, Australia. The name of the park is from Walter Burley Griffin's original plan for Canberra where he planned Telopea Park at the end of Sydney Avenue. The park is named after the floral emblem of New South Wales, also known as the Waratah. Griffin planned that the state capital city avenues were terminated with a park named after the generic botanical name for a native plant from that particular state. The park covers 0.079 km².

The park was established in 1922 and is very long and thin, with many large native and introduced trees. A stormwater drain runs along the middle of the park, which is crossed by several bridges. The park has barbecue areas and playground equipment, and is a popular destination. It is bounded by Telopea Park West (street) and Telopea Park East (street) on either side, with Manuka Oval at the southern end, across New South Wales crescent, and Bowen drive on the Northern End, near Lake Burley Griffin. The park is between the suburbs of Barton and Kingston close to Lake Burley Griffin.

Image by Cfitzart on Wikimedia under Creative Commons License.
Sight description based on wikipedia
3

Canberra Glassworks is an Australian gallery and glass art studio open to the general public to view the glass artists working. Opened in May 2007 by Jon Stanhope, it is the largest dedicated glass studio facility in Australia. It is located in the Kingston Powerhouse which was designed by John Smith Murdoch and constructed from 1913-1915. The power station generated electricity until 1957 and is Canberra's oldest public building. Particular effort was made to preserve the original building and surroundings where possible, and was developed within a framework of Ecologically Sustainable Design (ESD).

The centre is strongly linked with the ANU School of Art Glass Workshop, whose founding workshop head Klaus Moje was pivotal in establishing the centre. The current workshop head Richard Whiteley is also very involved with the centre and has work on display. The centre was originally scheduled to be opened in September 2006, but was opened in May 2007. The creation of Glassworks and renovation of this building is part of the redevelopment of the lake foreshore surrounding Kingston. The studio contains a public viewing gallery above the main hotshop areas as well as public access walkways around all glass working areas. Glassworks also offers courses to non-practicing artists and members of the public, as well as students. There is also a volunteer program. The studio also offers members of the general public to commission works through artists working at the studio.

Operation Hours: Wednesday - Sunday: 10 am - 4 pm;
Image by chrisdlugosz on Flickr under Creative Commons License.
Sight description based on wikipedia
4

The Old Bus Depot Markets is the most famous market area in south Canberra. This multicultural place offers a large number of stalls selling all kinds of handcrafted goods and souvenirs. This tourist hotspot is one of the most interesting and colorful shopping places in the city.

Hours: Sunday: 10 am-4 pm.
Image by avlxyz on Flickr under Creative Commons License.
5

The Russian Orthodox Church of St John the Baptist (ROCOR) in Canberra is part of that faith's Australia and New Zealand Diocese. This beautiful church welcomes everyone inside to see its fascinating painted ceiling, which represents the traditional Orthodox way of decorating a house of worship.
Image by quinn.anya on Flickr under Creative Commons License.

Gold Creek is a small village situated near Canberra. It's also the perfect place to take the whole family for outdoor recreation, with a number of great parks, museums and gardens to choose from. Take our tour to discover Gold Creek's top attractions.

Places of Worship in Canberra