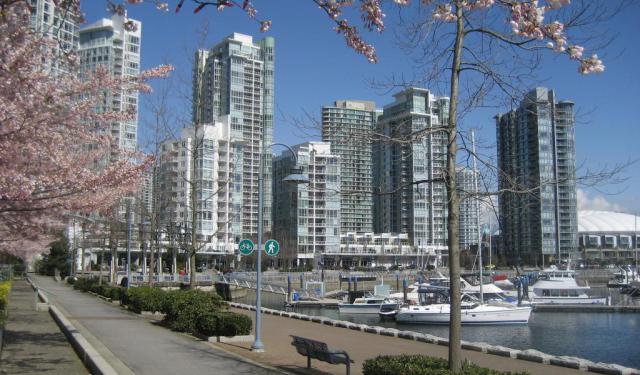 Image by Arnold C on Wikimedia under Creative Commons License.

Walking Tour of Yaletown in Vancouver (Self Guided), Vancouver

For many years Yaletown has been the thriving industrial heart of Vancouver. This area of the city looks unlike any other and is considered to be the home of Vancouver's "elite" society. This walking tour will take you to the most significant Yaletown spots.
How it works: Download the app "GPSmyCity: Walks in 1K+ Cities" from iTunes App Store or Google Play to your mobile phone or tablet. The app turns your mobile device into a personal tour guide and its built-in GPS navigation functions guide you from one tour stop to next. The app works offline, so no data plan is needed when traveling abroad.

The Beatty Street Drill Hall is home to Vancouver's oldest military unit, the British Columbia Regiment (Duke of Connaught's Own). It was opened in 1901 by the soon-to-be King George V, and is currently listed as one of Vancouver's Class A heritage buildings.

In Canada, a drill hall is where a unit trains, meets, and parades. The white limestone building itself was designed by David Ewart, and evokes an old-style castle, with turrets and battlements. Alongside the building are two tanks, and a 64-pounder gun. The walls themselves are over three feet thick, and the foundation is comprised of enormous blocks of granite.

Image by Bobanny on Wikimedia under Creative Commons License.
2

Rogers Arena is an indoor sports arena located in downtown Vancouver. It is the city's primary indoor sports venue, and opened in 1995. It has 18,890 seats for ice hockey and 19,700 for basketball due to the NBA's expansion into Canada. Among these seats are 88 luxury suites, 12 hospitality suites, and 2,195 club seats. This arena was the venue where the ice hockey portion of the 2010 Winter Olympics was played.

Rogers Arena was intended to replace Pacific Coliseum as Vancouver's primary sporting arena, and to act as the home base for the Vancouver Canucks hockey team, and Vancouver Grizzlies basketball team prior to their move to Memphis for the 2001-2002 basketball season. Construction was completed in 1995, and the facility was upgraded in 2006 to include an LED ribbon board and score board, then again in 2008 to improve the audio system. Further improvement plans include adding office space, and more room for fan concessions.

Image by Buchanan-Hermit on Wikimedia under Creative Commons License.
Sight description based on wikipedia
3

The BC Place Stadium currently serves as the home for the BC Lions Canadian football team and Vancouver Whitecaps Major League Soccer team, and houses the BC Sports Hall of Fame. In the past, it served as the Olympic stadium for the 2010 Winter Olympics, was an eight time host for the Canadian Football League's Grey Cup, and was the venue at which Pope John Paul II gave an address as part of the papal visit to the Archdiocese of Vancouver.

Michael Jackson performed several concerts with his brothers in BC Place Stadium during 1984, to a packed house every night. Later, in 2008, Madonna gave her first Vancouver performance at the venue as part of her Sticky & Sweet Tour. The arena has over 200 events each year, including trade shows, expos, concerts, community events, and motor sports. Fans of just about any kind of sport won't want to miss the chance to visit the BC Place Arena, as well as take a tour of the BC Sports Hall of Fame.
Image by Mike on Wikimedia under Creative Commons License.
Sight description based on wikipedia
4

The Contemporary Art Gallery (CAG) is the only independent, non-profit public art gallery in downtown Vancouver. The CAG exhibits local, national, and international artists, primarily featuring emerging local artists producing Canadian contemporary art. In 2001, architects Martin Lewis and Noel Best designed the facility the CAG now occupies. The exhibition facility consists of two galleries and a series of window vitrines on the facade that provide an additional opportunity for exhibition. Established in 1971, the Contemporary Art Gallery (originally called the Greater Vancouver Artist's Gallery) began as an outgrowth of the Social Planning Department of the City of Vancouver, in which Vancouver artists were hired for a six month period to produce art for exhibition at the gallery, and for inclusion in the City of Vancouver Art Collection.
Image by Scott Massey on Wikimedia under Creative Commons License.
Sight description based on wikipedia
5

The modern building of the Vancouver International Film Center was designed by Hewitt and Kwasnicky Architects and opened to the public in 2005. The site is home to the 175-seat VanCity Theater that often hosts seminars, live concerts and other presentations.
Image by Arnold C on Wikimedia under Creative Commons License.
6

Built in 1888, Roundhouse is the oldest construction in Vancouver and still stands in its original location. It was used as the end-line loacation for the national railway. Today, it is the home of the Community Arts and Recreation Center.
Image by psd on Flickr under Creative Commons License.
8

George Wainborn Park is a 2.5 hectare waterfront park located in downtown Vancouver. It is complimented by a circular water feature designed to mimic the Vancouver area's many natural water features, and a combination of formal and informal plantings. Though the area has a very definite “urban park” feel, fans of natural settings will enjoy the informal tree plantings and bosque of birch trees.

The upper area of George Wainborn Park looks out over False Creek, with yellow steel Adirondack chairs that provide ample seating. The lower area of the park is where the lawns, children's playground, walkway leading to the seawall, and promontory are located. 2006 saw the installation of a forty foot tall wind sculpture by artist Doug Taylor. Called “Khenko,” the Coast Salish work for heron, this sculpture is designed to honor the return of Vancouver's native herons to the area.

The nightlife in Vancouver is diverse enough for everyone to find a suitable spot to relax and let loose. The gay and lesbian community certainly has a great selection of clubs and bars to choose from, all with great music and great drinks. Take the following tour to experience Vancouver's top rated gay clubs.