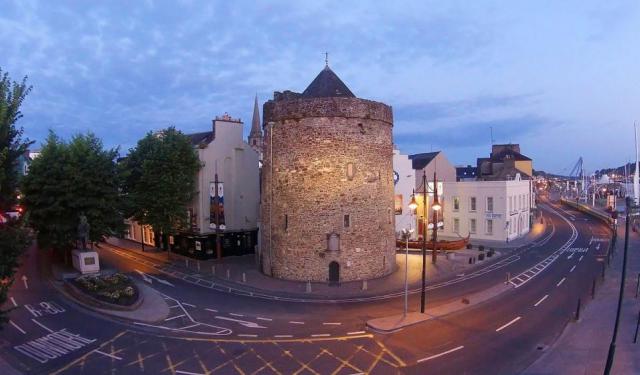 Image by dlkinney on Flickr under Creative Commons License.

Waterford is one of the largest cities in southeastern Ireland. The city's motto is “Waterford remains the untaken city." Visit castles built in ancient times, churches that played witness to religious revolutions and other historically significant buildings. Take this walking tour to visit the most notable historic buildings in Waterford.
How it works: Download the app "GPSmyCity: Walks in 1K+ Cities" from iTunes App Store or Google Play to your mobile phone or tablet. The app turns your mobile device into a personal tour guide and its built-in GPS navigation functions guide you from one tour stop to next. The app works offline, so no data plan is needed when traveling abroad.

2) Waterford Museum of Treasures (must see)

The Waterford Museum of Treasures is housed in a six-story, 19th-century granary. The museum displays rare artifacts associated with Waterford history from the time of the Vikings to the present. The museum is in the original Crystal building, dating back to the 19th century. The only surviving piece of clothing worn by Henry VIII is a cap of maintenance awarded to the Mayor of Waterford, along with a bearing sword, in 1536. It currently resides in the Waterford Museum of Treasures. A series of interactive and audio-visual presentations will help you explore the collections more in depth.

Image by Nmwalsh on Wikimedia under Creative Commons License.
Sight description based on wikipedia
3

Reginald’s Tower holds an important place in Ireland's history. Waterford's original city wall had 17 towers, although only 6 remain today, one of which is Reginald's Tower. Over the years, the tower has served as a defensive structure, a storage area, a prison and even as a residence for some Waterford officials. It opened for public visits only in the 1950s. After the tower was restored, it became home to Waterford's Civic Museum.
Image by Roomic Cube on Flickr under Creative Commons License.
4

Christ Church Cathedral is a cathedral of the Church of Ireland. It is in the ecclesiastical province of Dublin.

Previously the cathedral of the Diocese of Waterford, it is now one of six cathedrals in the United Dioceses of Cashel and Ossory.

The first church on the site was built in the 11th century. This was replaced in 1210 by a Gothic Cathedral. Following the Irish Reformation, a new body was established by decree of the Irish Parliament to became the State Church in the Kingdom of Ireland. The Church of Ireland, as it was named, assumed possession of most church property (and so retained a great repository of religious architecture and other items, though some were later destroyed).

During the demolition of the old cathedral, a series of medieval vestments were discovered in 1773. They were presented by the then Anglican bishop, the Rt Revd Richard Chenevix, to his Roman Catholic counterpart, the Most Revd Peter Creagh, and are now kept in the Museum of Treasures in Waterford and the National Museum in Dublin.


Image by Merlante on Wikimedia under Creative Commons License.
Sight description based on wikipedia
5

The Franciscan Church is a religious edifice built in the Classical style. The church’s exterior is quite simple, showcasing a painted rendered parapet. Inside the church, you will see numerous Ionic columns and plasterwork.
Image by Andreas F. Borchert on Wikimedia under Creative Commons License.
6

According to Lewis’s Topographical Dictionary, Blackfriars Abbey dates from 1226. Today only the remains of the abbey can be seen in Waterford. These include the chancel of the church and the belfry.
Image by IanOfNorwich on Wikimedia under Creative Commons License.
7

Waterford Cathedral was built at the end of the 18th century by John Roberts. It is considered Ireland’s oldest Catholic cathedral. The cathedral’s architecture and design are amazing, although over the years it has been renovated many times. Today it is a beautiful structure with an interior illuminated by ten crystal chandeliers, a gift from the Waterford Crystal Center.
Image by Ramón on Wikimedia under Creative Commons License.
Sight description based on wikipedia
8

St. Patrick's Church is situated off Georges Street. St. Patrick’s is the oldest religious Catholic building in Waterford. The structure seen today dates back to 1750. This church was constructed during the period when the Catholic Church in Ireland was severely persecuted.
Image by Rafael Reviriego on Wikimedia under Creative Commons License.

Waterford’s nightlife is dynamic and lively. Even though Waterford is not a very big city, it has many nightclubs, discos, bars and pubs where tourists and locals can enjoy the vibrant nightlife. This walking tour will take you to the most popular nightlife spots in Waterford.

Waterford is one of the oldest cities in Ireland, located in the southeastern part of the country. Although fairly small, Waterford has a lot to offer in terms of historic attractions, some dating back hundreds of years. This orientation walk will take you to the most prominent sights of the city.