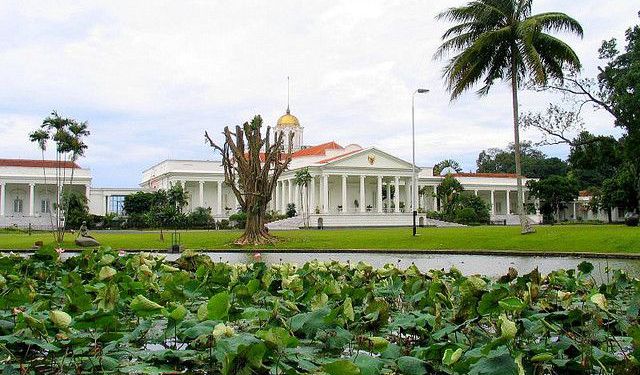 Image by A. www.viajar24h.com on Flickr under Creative Commons License.

The western region of Jakarta city has much for the visitor to admire. You can see some fascinating museums, great shops and renowned architectural sites and monuments. Take our West Jakarta Walking Tour to discover the beauty of this part of the city.
How it works: Download the app "GPSmyCity: Walks in 1K+ Cities" from iTunes App Store or Google Play to your mobile phone or tablet. The app turns your mobile device into a personal tour guide and its built-in GPS navigation functions guide you from one tour stop to next. The app works offline, so no data plan is needed when traveling abroad.

Located in the center of Jakarta, Farmer’s Statue is a splendid work of art as well as a motive of dispute among locals. The Tugu Tani, as it is commonly referred to, has been sculpted by two Russian sculptors, Otto and Matvei Manizer, and portrays an Indonesian farmer preparing to join the revolution, while his wife bids him goodbye, dragging him back for one more touch. The sculpture has been dedicated to all Indonesians who have fought for their freedom.

While some still regard the statue as a sign of homage to those who brought their Independence, the vast majority of population disregards both the message and the artistic value because of political matters. The statue was given to the Indonesian people by Russia in 1963, a period in which Russia was governed by the Communist Party and many of the Indonesian Parliament members shared the communist views. The statue can be observed in the traffic circle facing the Hyatt Aryaduta Hotel.

Image by frank wouters on Wikimedia under Creative Commons License.
2

Museum Joang ’45 (Battle ’45 Museum) is an establishment dedicated to Indonesia’s Independence gained in 1954 (hence the ’45 in the museum’s name). The museum is housed by a 1820 building which had first functioned as a luxury hotel (the Schomper Hotel). During Japanese occupation, the building was used for youth education meant to support the Japanese authority in Indonesia. Yet, the people teaching in the Asrama Menteng 31 (Menteng 31 Dormitory) directed the Indonesian youth towards a revolution which would bring them the so much wanted freedom from any international forces.

In honor of these people and in order to acknowledge the importance of the ’45 events in Indonesia’s history, the establishment was turned into a museum in 1974. Photographs portraying the events, weapons, flags and artillery used during the revolution and the documents related to the Independence topic are gathered under the Museum Joang ’45’s roof. The museum also hosts busts of the important people who supported the revolution. Even the official cars of the first Indonesian president (Soekarno) and vice-president (Hatta) have their place in the display.

Image by mararie on Flickr under Creative Commons License.
3

Mesjid Cut Mutiah or Cut Mutiah Mosque is probably one of the most interesting monuments in Jakarta, and one of the most nonconformist mosques in the entire world. The establishment housing the mosque was initially designed to accommodate offices of an architectural firm. Finished in 1922, this Dutch Rationalist style building was a perfect solution for the local heat and humidity conditions. This type of architecture is also known as Indies style. The central ventilation tower, specific to the Indies style, ensures a low interior temperature regardless of the outside temperature.

Prior to being transformed into a mosque, the building had functioned as a department for drinking water, post office, train company office and The Office of Home and Religion.

On 18 August 1987, the building was turned into today’s Mesjid Cut Mutiah. For this, several architectural changes have been made. In order to make room for the praying hall, the interior stairs were removed and the new ones were built in the exterior. Even so, the building does not face Kaaba, so the praying hall needed adjustments to make it suitable for religious ceremonies. Thus, mihrab and minbar had to be placed in the middle of the praying hall rather than in front of it, as they normally should be.

The mosque can be visited, but modest clothing is required. Also, visitors must take off their shoes, while women must wear scarves on their heads.
Image by fishkid on Flickr under Creative Commons License.
4

Jakarta Planetarium is a great place to spend quality time with your family. Suitable for kids as well as adults, the Planetarium offers diverse activities that will keep you occupied for at least one hour. There are multiple multimedia shows presenting the universe and different aspects of the Solar System (the solar eclipse, the lunar eclipse, the Earth, our galaxy, etc.). The shows are held after a specific program Tuesday through Sunday with the most presentations offered in Bahasa Indonesia; English shows can be arranged as well. After the shows, visitors can explore the exhibits from the Planetarium halls.

Jakarta Planetarium features a high precision telescope which can be used for observing the rare astrological phenomena. Visitors are invited to take a look at the sky during eclipses, comets and other important astronomical events. Regularly, the Planetarium holds gatherings of the local astronomers.
Image by Jeff Kubina on Flickr under Creative Commons License.
5

The Rumah Sakit Cikini, also known as the Cikini Hospital, was originally a 19th Century mansion. Built by Indonesian painter Raden Saleh as his home in 1852, this beautiful and stylish building was transformed into a hospital in 1898.
Image by hellochris on Flickr under Creative Commons License.
6

The Pasar Cikini is a great market where locals go to buy food, clothes and other daily necessities. Visitors can also browse here the excellent collection of Indonesian gold jewelry and find many other traditional items to take home.
Image by hellochris on Flickr under Creative Commons License.
7

Established in 1980, the National Library holds a unique collection of books and manuscripts from the pre-World War II era. Some of its journals and maps date as far back as the 12th Century. The library’s holdings include books in English, French, Dutch, and German.
Image by austinevan on Flickr under Creative Commons License.