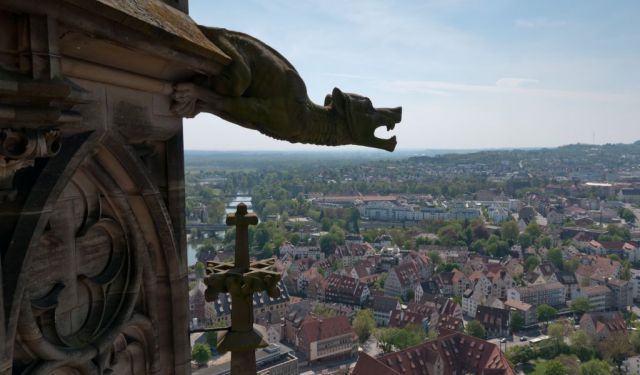 Image by LenDog64 on Flickr under Creative Commons License.

West Munster offers a concentration of fascinating tourist attractions, like the Münster Zoo and Hippomax, the Botanischer Garten and an unique open-air museum. Take this two-hour tour to explore the most interesting sights in the western part of the city.
How it works: Download the app "GPSmyCity: Walks in 1K+ Cities" from iTunes App Store or Google Play to your mobile phone or tablet. The app turns your mobile device into a personal tour guide and its built-in GPS navigation functions guide you from one tour stop to next. The app works offline, so no data plan is needed when traveling abroad.

The Münster all-weather zoo is an absolutely unique spot in Europe, it harbors around 3000 animals in excellent, close to natural conditions. Some of the animals have exceptionally spacious outdoor areas- cheetahs, for example, are kept in an enclosed area of 7500 square meters, this gives them the chance to live full and healthy lives, as well as breed under normal condition. The zoo also features tropical greenhouses, where visitors can walk and experience the life of various birds.

The Münster Zoo is one of the few zoos that allow visitors to feed elephants and some other animals, however only during specified feeding hours. The zoo team and administration actively take part in multiple international conservation projects, and have greatly succeeded in preserving endangered plant and animal species in their original environment. The all-weather zoo in Münster is a wonderful place for kids and adults to visit and a must see in Munster.

The Westphalian Horse Museum is an unique place to experience and study different horse breeds and their role in human history. The museum consists of four parts: a large exhibition hall, childrens and horse park (containing various horse breeds), the Hippomaxx arena for events, and a foyer, shop and information office. Overall the museum features 1,000 square meters of exhibitions space dedicated to the natural and cultural history of these amazing animals. The museum exhibition features many interesting themes, such as 50,000,000 years of horse existence; the proportions and anatomy of the horse body; traditions of horse catching and breeding in Westphalia; horses and their devoted service during wartime and everyday works; and many other fascinating topics. The Westphalian Horse Museum is equipped with modern facilities and gives a very deep and special insight into the life of the horse.

The Westfälisches Museum für Naturkunde was founded in 1892 and over the years has created a wonderful scientific base for exploring and studying the natural history of the world. It features 4,200 square meters of exhibition space and has a lot of attractions to offer. They showcase very rare and unique objects, for instance, the world’s biggest ammonite is displayed in the foyer, so visitors can study this one and only sample. Another pride of the museum is the “Portrait of the Milky Way” by Jon Lomberg. This amazing picture occupies twelve square meters and is beautifully illuminated. The Natural History Museum has also integrated a highly modern planetarium, and at the present moment is the only museum in Germany that combines natural history exhibitions and planetarium shows. The Westfälisches Museum für Naturkunde is a wonderful chance to experience culture, astronomy and nature in Münster.
Image by Schuetze1988 on Wikimedia under Creative Commons License.
4

The Mühlenhof-Freilichtmuseum is an Open-Air Museum in Münster, which features a wonderful collection of farmhouses and other rural buildings from Münsterland. The original structures showcase the everyday life of peasants and craftsmen from the 17thto the 19th century. The museum's ensemble consists of 30 different buildings brought here from different parts of Westphalia. The interiors are carefully preserved to match the era and most of the tools and furnishing are represented by original, antique samples. The museum was established in 1961 and its first exhibition was represented by a 18th century windmill brought from Emsland. That mill gave the museum its name.

Today the exhibition is represented by peasants' farmsteads, rural school, village church, the village inn and the store, apiary, rural smithy and other interesting samples of village life and architecture.

The Mühlenhof-Freilichtmuseum is a “must see” attraction in Münster, it is open on Monday to Sunday from 10 am to 6 pm. Admission charges: adults – 5 €, teenagers – 3 €, children under 6 years – no charge.
Image by Corradox on Wikimedia under Creative Commons License.
5

Established in 2008, FB69 Galerie has become a place to discover contemporary poetic art. The gallery is mainly focused on modern narrative paintings and drawings, as well as sculptures and artistic installations. FB69 makes it a priority to promote young artists and to help them obtain recognition. They exhibit such wonderful artist as Ana Bagayan, Annika Burbank, Maria Gerdwilker, Mary Iverson, Sabine Sinner, Nadine Wottke, and many others.
Image by Mary Iverson on Flickr under Creative Commons License.
6

The Botanischer Garten Münster is a botanical garden maintained by the University of Münster. Located directly behind the Prince Bishop's Castle, within the castle grounds, it is open daily and doesn't have any admission charges. The garden was established in 1803 by Freiherr vom Stein for the university's medical faculty, with first greenhouses built in 1804. From 1806 to 1815, during the occupation of Westphalia by French troops and the Congress of Vienna, its emphasis changed from medicinal plants to a primary focus on indigenous plants. Its first seed catalog was issued in 1827, and its orangery was constructed in 1840. The tropical garden was organized in 1935 and is still considered to be one of the best in the country. The garden was severely damaged during World War II, but carefully restored with ensemble extensions. An artificial stream, meadow, and moor were created during the 1990s, and in 2005 a new medicinal garden was added. Today the garden contains about 8,000 species, including a major collection of 230 of the 280 known Pelargonium species. In addition to ten greenhouses (total area about 2,000 square meters), major garden sections are as follows: alpine garden with plants from the Alps and Pyrenees; arboretum, as well as birch-oak forest and Tilia-beech trees; Australia and New Zealand plants; cottage garden from the 1900s, featuring vegetables and herbs, Mediterranean plants, kept in the orangery in cold months; moor and heath, systematic garden of seed plants; tropical house; Victoria House, containing Victoria regia. The garden contains a good selection of rare and mature tree specimens in its arboretum, including orange trees that are over 200 years old.
Image by Rüdiger Wölk, Münster on Wikimedia under Creative Commons License.
Sight description based on wikipedia
7

The Mineralogisches Museum is part of the University of Münster and specializes in the three main areas of mineralogy: crystallography, mineralogy and petrology. The museum focuses on preserving various crystalline and amorphous materials for research purposes. The exhibition is displayed on two floors, on over 500 square meters. The museum's collection is based mostly on individual and government donations. The Mineralogical Museum was originally established in 1824 as the "Museum mineralogicum et Zoologicum". During World War II the museum war seriously damaged, but was reopened after a long restoration in 1963.
Image by STBR on Wikimedia under Creative Commons License.

Münster is well-known for its long list of fascinating museums. This wonderful city can tell you much about history, archeology, geology, art, and other fields. Take this tour to get acquainted with its culture and discover the most interesting of Münster museums.

Münster is a city that will pleasantly surprise you with its green areas and numerous parks, most of which were built on top of former fortifications. Today these recreational spaces represent the pride and joy of the city of Münster. This tour gives you the chance to visit six of these wonderful parks.