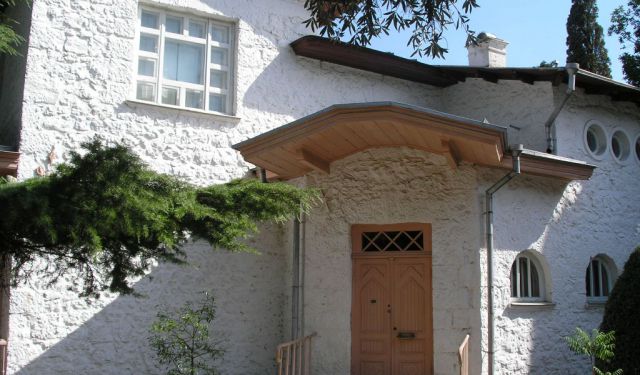 Image by Dmytro Sergiyenko on Wikimedia under Creative Commons License.

There are some amazing attractions in the western part of Yalta. Visit museums, admire magnificent churches and walk along beautiful Pushkin Alley. This self-guided tour will lead you to the most notable locations in western Yalta.
How it works: Download the app "GPSmyCity: Walks in 1K+ Cities" from iTunes App Store or Google Play to your mobile phone or tablet. The app turns your mobile device into a personal tour guide and its built-in GPS navigation functions guide you from one tour stop to next. The app works offline, so no data plan is needed when traveling abroad.

The Yalta State Historic-Literary Museum is located on Pushkina Street in a beautiful historical building. This museum is dedicated to literature. The museum collects and displays treasured literary manuscripts. It also conducts research on the lives of great authors, which it presents to the public.

Image by Tschäff on Flickr under Creative Commons License.
2

Numerous beautiful fountains line one of the main streets in Yalta, Pushkin Alley or Pushkin Boulevard. The ornamental fountain is the most prominent landmark on this famous Yalta boulevard. The fountains appear most impressive at night when they are brightly illuminated and the water reflects the different colors of light.
Image by Snap® on Flickr under Creative Commons License.
3

The Church of the Virgin Mary is a stunning Roman Catholic church in Yalta. The church was constructed in 1914 and is an impressive sight on Pushkinskaya Alley. Komornitsky and Krasnov designed the church, which is rather small but richly decorated.
Image by tskdesign on Flickr under Creative Commons License.
4

The climate in Yalta is perfect for growing rare species of grapes. Visit the National Institute of Vine and Wine to learn more about wine production in Yalta and taste the famous wine, Magarach. The institute is located in a beautiful historical building with impressive architectural features.
Image by Kornienko Victor on Wikimedia under Creative Commons License.
5

5) The Chekhov Museum (must see)

Image by d_proffer on Flickr under Creative Commons License.
Sight description based on wikipedia