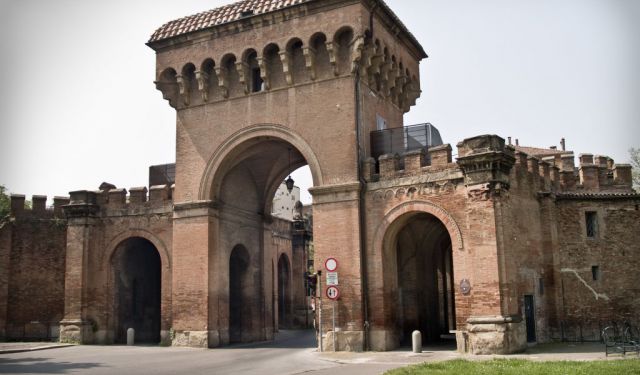 Image by Michele Ursino on Wikimedia under Creative Commons License.

The western part of Bologna has several historical sites, such as the old city gate, Old Town, several old churches, as well as art galleries and museums. This self-guided tour will lead you to the most interesting places in Bologna’s west end.
How it works: Download the app "GPSmyCity: Walks in 1K+ Cities" from iTunes App Store or Google Play to your mobile phone or tablet. The app turns your mobile device into a personal tour guide and its built-in GPS navigation functions guide you from one tour stop to next. The app works offline, so no data plan is needed when traveling abroad.

Lorenzo Sassoli de Bianchi, currently President of Italy's leading health food company, Valsoia, was invited to become its first President in 1995 on the strength of his reputation as an art collector, innovator and organiser. Sassoli de Bianchi was reappointed President for a further 5 years in 2009. The new premises opened on 5 May 2007 and in their first year hosted a range of exhibitions, installations, performances, musical events, films and multimedia experiences which quickly established MAMbo's reputation as a leading experimental museum in Italy and one of Europe's foremost creative centres of contemporary art. MAMbo is a leading partner in the Didart art teaching project supported by the EU Culture Programme.

Image by Tim Norvell on Flickr under Creative Commons License.
Sight description based on wikipedia
2

Operation hours: Monday - Thursday: 7 am - 12 am; Friday-Saturday: 7 am- 2 am.
Image by karimian on Flickr under Creative Commons License.
3

San Francesco is a church in Bologna, northern Italy. It was begun in 1236 by Marco da Brescia and his brother Giovanni, a Franciscan monk. Despite its Romanesque façade, it is one of the best example of French Gothic style in Italy. This is manifest in the interior, which has a nave and two aisles, in the apse with corridor, in the high vaults divided into six sections with ogival arches, and in the use of buttresses. The church is home to the monuments of the jurist Accursius and his son Francesco, Odofredus and Rolandino dei Romanzi.
Image by Giovanni Dall'Orto on Wikimedia under Creative Commons License.
Sight description based on wikipedia
4

Trattoria Amedeo is a beautiful restaurant located near the historical Saragozza Gate. It offers delicious homemade Italian food at reasonable prices. Included among its menu items are tortellini, lasagna and tagliatelle, as well as a delicious assortment of Italian desserts and wines.
Image by Théo on Wikimedia under Creative Commons License.
6

Porta Saragozza is an historical gate in the city wall that surrounded Bologna’s Old Town. This impressive and spectacular monument attracts many tourists. It differs from other gates by the decorated walls enclosing it. The Museum of the Blessed Virgin of Saint Luke is housed within the gateway.
Image by Michele Ursino on Wikimedia under Creative Commons License.
7

7) Museum of the Historical Tapestry

The Museum of the Historical Tapestry is a unique museum that displays the artistic heritage of tapestry. The museum also exhibits Italian, Middle Eastern, Far Eastern and other European fabrics, as well as beautiful embroideries, vestments and old tools used to create these things.

The Bologna Museum of Modern Art exhibits part of its collection at Villa delle Rose, which dates back to the 19th century. Its main feature is a ceiling fresco depicting women, a man on horseback and angels.
Image by unforth on Flickr under Creative Commons License.
9

Carlo Francesco Dotti built Arco del Meloncello in 1732 to connect Saragozza Street with the porticoes on the road to the Church of Saint Luca. This beautiful arch was designed in the Baroque style.
Image by Pietro Poppi on Wikimedia under Creative Commons License.