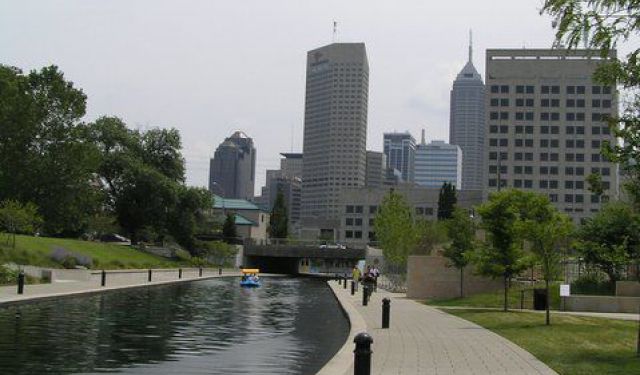 Image by navets on Flickr under Creative Commons License.

White River State Park, spread across 250 acres, houses the Indianapolis Zoo and and White River Gardens, theater and concert venues, museums, bridges, abundant green spaces, waterways and many other amazing attractions. Follow this tour to discover Indianapolis’ White River State Park.
How it works: Download the app "GPSmyCity: Walks in 1K+ Cities" from iTunes App Store or Google Play to your mobile phone or tablet. The app turns your mobile device into a personal tour guide and its built-in GPS navigation functions guide you from one tour stop to next. The app works offline, so no data plan is needed when traveling abroad.

The Medal of Honor Memorial is dedicated in honor of all recipients of the Medal of Honor, the United States military's highest award for valor. The memorial was unveiled May 28, 1999, during Memorial Day weekend. The Memorial is located on the north bank of the Central Canal, adjacent to Military Park, and consists of 27 glass panels set in concrete bases. Indiana Limestone in shades of buff, gray, and pink are also a part of the monument. The panels are arranged into 15 walls, each representing an armed conflict in which a Medal of Honor was awarded. The names of the recipients are etched into the glass. At the time of dedication, there were 3,436 Medal of Honor recipients etched into the monument.

The Memorial also contains an elaborate lighting system that illuminates certain panels to correspond with a 30-minute audio tour that is played over a speaker system. The audio tour is made up of stories about the wars, and accounts of living Medal recipients. Many of the stories were recorded by Medal of Honor recipients. The Memorial received a 2001 Merit Award from the American Society of Landscape Architects.

Located on the Indiana State Museum complex, the 409-seat IMAX Theater features movies in 2D and 3D on a six-story screen. It provides unbelievable clarity and sound, displaying images in a greater resolution than traditional film systems. Be sure to visit this wonderful cimema.
Image by navets on Flickr under Creative Commons License.
3

Old Washington Street Bridge, built in 1916 as an element of the National Road over White River, is a seven-span arch bridge with a pedestrian crossway from Washington Street to the Indianapolis Zoo and White River Gardens. The bridge serves as an open gallery for Indiana sculptors involved in a biannual sculpture program. Visitors can browse the sculptures, which are for sale, while overlooking the splendid view of Central Canal.
Image by Serge Melki on Flickr under Creative Commons License.
5

The historic Pumphouse, built in 1870, is an elegant one-story brick edifice with a slate roof and copper facing that overlooks White River. It was used to pump the canal to produce drinking water and for protection from fire. The original building was modified in 1930. Visitors will learn about the water plant’s development and history. Today, this facility serves as the administration center for the WRSP Development Commission.
Image by Serge Melki on Flickr under Creative Commons License.
6

The Lawn, a new amphitheater opened in 2003, has been named Indianapolis’ Premiere Concert Venue. Seating 5,000, it features concerts and festivals from a variety of popular artists. It is also used for theater performances and sporting events, and is a great place to relax or picnic.
Image by halo969 on Flickr under Creative Commons License.
7

The Indianapolis Zoo was first opened to the public in 1964. Its current home in White River State Park was opened in 1988 with a size of 64 acres (26 ha). The zoo hosts more than a million visitors each year and plays a role in worldwide conservation and research, including accomplishing the world’s first successful artificial insemination of an African elephant.

The Indianapolis Zoo is the only institution accredited by the Association of Zoos and Aquariums (AZA) and the American Association of Museums as a zoo, an aquarium, and as a botanical garden. The zoo is a private non-profit organization, receiving no tax support and is supported entirely by membership fees, admissions, donations, sales, grants, and an annual fundraiser. The Indianapolis Zoo's stated mission is "The Indianapolis Zoo empowers people and communities, both locally and globally, to advance animal conservation."

Image by Durin on Wikimedia under Creative Commons License.
Sight description based on wikipedia
8

The White River Gardens (3.3 acres) are botanical gardens located adjacent to the Indianapolis Zoo at 1200 West Washington Street. The gardens are a part of the White River State Park. The gardens were opened in June 1999. They contain over 1,000 plant varieties plus special exhibits. From 2000 through 2010, it also included a butterfly conservatory filled with plants and a myriad flying butterflies. The butterfly exhibit was discontinued in 2011.
Image by Cburnett on Wikimedia under Creative Commons License.
Sight description based on wikipedia

Indianapolis contains an extensive variety of churches which have influenced the social geography of the city. The following tour will guide visitors to the city’s oldest and most significant religious architecture.

Indianapolis contains many unique constructions throughout the city that gives it an inimitable identity. Some of its best buildings are located along the diagonal avenues coming from Mile Square, according to the city plan of Alexander Ralston in 1821. Many of them are registered on the National Register of Historic Places. Explore Indianapolis’ architectural treasures in the following tour.