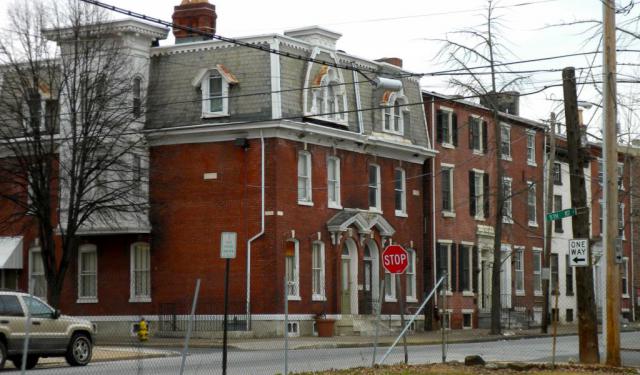 Image by McGhiever on Wikimedia under Creative Commons License.

Founded between the Christina and Delaware rivers in the namesake state of Delaware, Wilmington carries legacy of its first Swedish settlers and the du Pont family who left a great deal of mark on the city's history. Some of the major local landmarks are closely associated with the two. Still, there are more to Wilmington worth checking out. Follow this orientation walk and learn about other significant historic and cultural sights of the city.
How it works: Download the app "GPSmyCity: Walks in 1K+ Cities" from iTunes App Store or Google Play to your mobile phone or tablet. The app turns your mobile device into a personal tour guide and its built-in GPS navigation functions guide you from one tour stop to next. The app works offline, so no data plan is needed when traveling abroad.

Old Swedes Episcopal Church, or Trinity Episcopal Church, is the second church in Wilmington's Trinity Parish. It is located on the site of the historic Fort Christina Cemetery near the first Swedish settlement in America. The church is considered the city's oldest, as it was completed around 1700. It is a fine example of Swedish-American architecture. It was built from local blue granite, with the entrance tower made from Swedish bricks. It was proclaimed a National Historic Landmark in 1961.
Image by Smallbones on Wikimedia under Creative Commons License.
2

The Hendrickson House Museum shares a site with Old Swedes Church and Cemetery in downtown Wilmington. It is located near Wilmington's first Swedish settlement. The house is a fine example of a typical farmhouse from the late 1600s. The museum focuses on colonial history and displays a variety of artifacts from this time period. Both the museum and the church are listed on the National Register of Historical Places. The church cemetery has gravestones that date back more than 400 years. The museum is open Wednesday to Saturday from 10:00 a.m. to 4:00 p.m.
Image by Smallbones on Wikimedia under Creative Commons License.
3

St. Mary of the Immaculate Conception is a historic Roman Catholic church in Wilmington. St. Mary's is the only active church in Delaware founded by Saint John Neumann, Bishop of Philadelphia 1852–1860, who consecrated it on October 31, 1858. The church and adjacent St. Mary's school were the principal institutions for worship and the education and integration of thousands of Irish immigrants in Wilmington, most of whom lived in the parish upon first arriving. The church was added to the National Register of Historic Places in 1976.

The church is a brick building trimmed in limestone and measuring about 100 feet long and 60 feet wide. The front facade features three brick towers; two corner ones are set diagonally, with onion-shaped domes topped with crosses and the center square tower (built 1881), now used as a belfry, has arched louvered openings. The dome on the center tower replaced an original wooden belfry and smaller dome destroyed by fire in March 1966. The parochial Catholic school, St. Mary's, was built on the adjacent property in 1866. St. Mary's parish became part of the Catholic Diocese of Wilmington at its inception in 1868.

Bishop Neumann was beatified during the Second Vatican Council on October 13, 1963, and was canonized on June 19, 1977 by Blessed Pope Paul VI. In commemoration of his canonization, the parish secured a life-sized image of the new saint from the well-known local sculptor Charles Parks. The small, close-knit, racially mixed parish continues to be an oasis of faith on the East Side of the city.

Image by Smallbones on Wikimedia under Creative Commons License.
Sight description based on wikipedia
4

The Old Town Hall is run by the Delaware Historical Society. It is located next door to the Delaware History Museum in the city center. The Old Town Hall was constructed at the end of the 18th century and served as Wilmington's primary political and social institution for about a century. Today, the building has been restored and serves as a venue for special events, exhibitions, and programs throughout the year. This Federal-style, two-story building has red brick walls, arched windows on the ground level, and a simple tower. The Old Town Hall is open to visitors by appointment only.
Image by Smallbones on Wikimedia under Creative Commons License.
5

The Quaker Hill Historic District is a national historic district located at Wilmington. It was added to the National Register of Historic Places in 1979, with a boundary increase in 1985. It encompasses 151 contributing buildings in a residential neighborhood west of the central business district of Wilmington.

St. Peter's Cathedral is a Roman Catholic church, which was built in 1816. The cathedral is situated in the heart of Wilmington on West 6th Street. It is small, brick, Romanesque church that has been expanded several times over the years. The main belfry was built in 1829 and has remained unaltered to this day. St. Peter's underwent a substantial renovation in 1870 and again at the beginning of the 20th century. The mural painting, marble baptismal font and altars, bishop's chair, stained glass windows and barrel-domed roof were added during these renovations. Soon after the renovation in 1905, the church was consecrated as a cathedral.
Image by Farragutful on Wikimedia under Creative Commons License.
Sight description based on wikipedia
6

The Grand Opera House, also known as The Grand or Masonic Hall and Grand Theater, is a 1,208-seat theater for the performing arts. The four-story building was built in 1871 by the Delaware Grand Lodge of Masons to serve as a Masonic Temple and auditorium.

Historically, the Grand hosted a variety of operas, symphonies, Victorian melodramas, minstrel shows, burlesque, vaudeville, and other exhibitions. For most of the twentieth century the Grand was operated exclusively as a movie theater, run by Warner Brothers from 1930 and eventually closing in 1967. It was reopened four years later and returned to programming emphasizing classical music, partnering with the Delaware Symphony Orchestra, OperaDelaware, and the First State Ballet Theatre.

It was listed on the National Register of Historic Places in 1972 with assertions of both architectural and historical significance.
Image by McGhiever on Wikimedia under Creative Commons License.
Sight description based on wikipedia
7

The fascinating building of the Public Library was build in 1899. Wilmington Public Library is a massive white-gray edifice designed in the Neoclassic style by renowned architects Alfred Githens and Edward Tilton. The symmetrical facade is decorated with prominent Ionic pilasters, garlands, a terra-cotta frieze with Egyptian motifs, and narrow grilled windows.
Image by McGhiever on Wikimedia under Creative Commons License.
Sight description based on wikipedia
8

Grace United Methodist Church was founded in 1865 and was designed by Wilmington architect Thomas Dixon in 1868. The church includes several adjacent buildings constructed in the Gothic style. It faces three streets in central Wilmington: North Washington, West 9th, and North West Street. The church features two steeple towers topped by spires on the North Washington and 9th Street facades, a triple arch entrance, and large stained glass windows. This historic church was listed on the National Register in 1983.
Image by Smallbones on Wikimedia under Creative Commons License.

Wilmington is the largest and most important city in Delaware. It is a city with a rich history and culture that has developed its own sense of identity. Numerous riverfront sites, parks, statues and memorials, bridges, and landmarks contribute to its beauty. Explore some of Wilmington's most notable attractions on this walking tour.