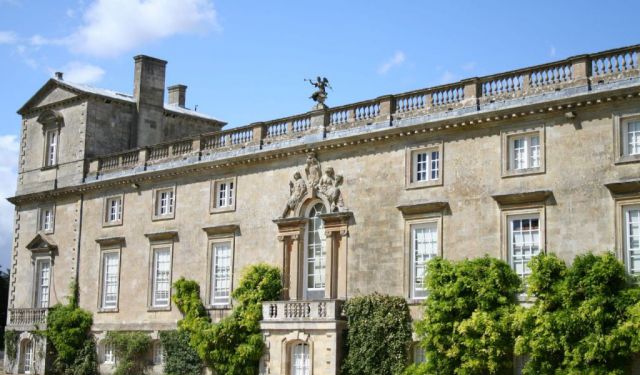 Image by Kachii (Katy) on Wikimedia under Creative Commons License.

The town of Wilton, the ancient capital of Wessex, is home to a number of historical landmarks that are well worth seeing, such as Wilton House, Intalianate Church and Wilton Shopping Village. Take this self-guided tour to visit some of Wilton's most attractive landmarks.
How it works: Download the app "GPSmyCity: Walks in 1K+ Cities" from iTunes App Store or Google Play to your mobile phone or tablet. The app turns your mobile device into a personal tour guide and its built-in GPS navigation functions guide you from one tour stop to next. The app works offline, so no data plan is needed when traveling abroad.

Wilton House is an English country house situated at Wilton near Salisbury in Wiltshire. It has been the country seat of the Earls of Pembroke for over 400 years. The first recorded building on the site of Wilton House was a priory founded by King Egbert circa 871. Later, this priory, due to the munificence of King Alfred, was granted lands and manors until it became wealthy and powerful. However, by the time Wilton Abbey was dissolved during the Dissolution of the Monasteries by King Henry VIII of England, its prosperity was already on the wane — following the seizure of the abbey, King Henry presented it and the estates to William Herbert, 1st Earl of Pembroke.

The house is renowned for its gardens — Isaac de Caus began a project to landscape them in 1632, laying out one of the first French parterres seen in England. An engraving of it made the design very influential after the royal Restoration in 1660, when grand gardens began to be made again. The original gardens included a grotto and water features.

Image by Kachii (Katy) on Wikimedia under Creative Commons License.
Sight description based on wikipedia
2

Wilton House Gardens and open parkland occupy 21 acres around the renowned Wilton House. The gardens were first designed in 1632. The entrance to Forecourt Gardens features a central fountain. The River Nadder turf pathway leads from Palladian Bridge to the Egyptian column and continues to the Water Garden. There is a children’s playground near the entrance. The gardens also include a pleasant area to picnic, a restaurant and a garden center, which supplies plants and gardening supplies.
Image by Jan van der Crabben on Wikimedia under Creative Commons License.
3

Strolling around Wilton Shopping Village, you will find a host of amazing shops that offer a stunning selection of goods, particularly clothing and shoes. This riverside shopping area is located just across the road from Wilton House. It boasts a wide variety of outlet stores located in renovated factory buildings. There is ample parking, a restaurant and a playground at the village.
Image by Chris Gunns under Creative Commons License.
4

Wilton Carpet Factory is close to the notable Wilton House. Wilton Carpets has been manufacturing and selling carpets for more than 300 years. The factory has some informative exhibits on carpet manufacturing and the evolution of the looms and machines used in carpet production.
Image by russelljsmith on Flickr under Creative Commons License.
5

St. Mary's Church is an old medieval church located at Wilton Market Place. The church was active for more than 600 years until a new parish church was built and St. Mary's was partially torn down. Today only the chancel and a few arches remain. The surviving chancel has a beautiful 18th-century Georgian ceiling. Plaques scattered around the church teach about the history of Wilton. St. Mary's Church was dedicated as a garden of peace in 1938 and is under the protection of the Church Conservation Trust.
Image by Trish Steel under Creative Commons License.
6

St. Mary and St. Nicholas Church was built in the 1840s and was designed by architect Thomas Henry Wyatt in the Basilica style popular among Italian churches. The most remarkable detail of this enormous church is its 32-meter-tall bell tower. The interior has dark marble columns and colored panels, and the walls are covered with ornate carvings and decorative embellishments. On the eastern wall is a stunning mosaic of Biblical figures.
Image by AlanFord on Wikimedia under Creative Commons License.

Salisbury welcomes people of many different faiths, and you can find Catholic, Anglican, Baptist, and other religious institutions represented here. Most places of worship in the city, however, belong to the Anglican Church, which has historically had a strong presence in Salisbury and the country as a whole. This walking tour will guide you to the most notable religious sites in central...  view more

On this self–guided tour you will explore Salisbury's historical and modern landmarks that are located outside of the city center. The Old Sarum settlement, stunning St. Francis Church, Stratford-Sub-Castle, St. Lawrence Church and interesting old houses on Strafford Road all shouldn't be missed!