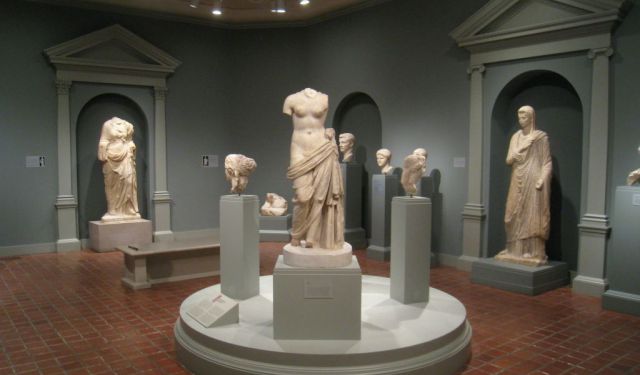 Take a break from the everyday and spend some time enjoying Worcester's art museums and galleries. Wandering among magnificent works and sampling some of the city's fine art exhibitions, you're certain to have a pleasant time.
How it works: Download the app "GPSmyCity: Walks in 1K+ Cities" from iTunes App Store or Google Play to your mobile phone or tablet. The app turns your mobile device into a personal tour guide and its built-in GPS navigation functions guide you from one tour stop to next. The app works offline, so no data plan is needed when traveling abroad.


Image by LEONARDO DASILVA on Wikimedia under Creative Commons License.
Sight description based on wikipedia
2

The Salisbury Mansion was constructed in 1772 by Stephen Salisbury I. Owned by three successive generations, the mansion witnessed many socio-cultural and economic changes in Worcester. As the Salisbury family was actively involved in local charitable activities, the mansion was saved as a historic house. It belonged first to the American Antiquarian Society. Later it became the property of the Worcester Art Museum. In 1984, after being restored, the mansion opened to citizens as a historic house museum, preserving the natural atmosphere of the Salisbury family home life in the 1830s.
Image by Alessandro Miranda on Flickr under Creative Commons License.
3

Located on Highland Street, Prints and Potter Gallery is owned by Norman Ringdahl, a certified picture framer in Worcester. He is a member of the Professional Picture Framers Association. The gallery staff is made up of 7 artists who express their own view of Worcester life through their original art and craft works. Prints and Potter, also called the American Craft and Custom Picture Framing Gallery, started over thirty years ago and offers services like painting restoration, picture framing and handicraft artwork. It respects the Eco Care movement, the works being made of natural material, without any chemical colour processing.
Image by wordcat57 on Flickr under Creative Commons License.
4

Worcester History Museum, also WHM, is the only institution that houses local history artifacts in its research library and galleries. Archival manuscript collections, maps and photography show Worcester's boom period as an industrially- and commercially-flourishing town. The museum's collections include artifacts like early wood pieces and ceramics, weaponry from the first English settlement through World War II, paintings and sculpture, and important costume and textile collections. Salisbury Mansion, the only house museum in Worcester, is the property of the History Museum.
Image by Christian Schussele (1824-04-16 - 1879) on Wikimedia under Creative Commons License.
5

ARTSWorcester, also known as AW, is a non-commercial organization offering support to new regional artists.It is situated in the building of The Aurora Hotel, which is a historic hotel building .The gallery was founded in 1979. Through its exhibitions, ARTSWorcester provides visual and cultural exchanges of young and promising artists. ARTSWorcester has five galleries as property, the main one hosted at Aurora, an elegant architectural landmark located in Main Street with 2,000 sq feet dedicated to paintings, sculptures, various performing events and festivals.
Image by Bree Bailey on Flickr under Creative Commons License.
Sight description based on wikipedia
6

One of Worcester's most impressive showplaces, Dzian Gallery is the only dealer authorized to sell works by different contemporary world artists. Here you will also find an original assortment of home decorations, exclusive collections of fine jewelry and purses, pottery, and more. The owners of the gallery, David and Gina Papazian, often host different art exhibitions and social meetings like ladies' night.
Image by Maryse Casol on Flickr under Creative Commons License.