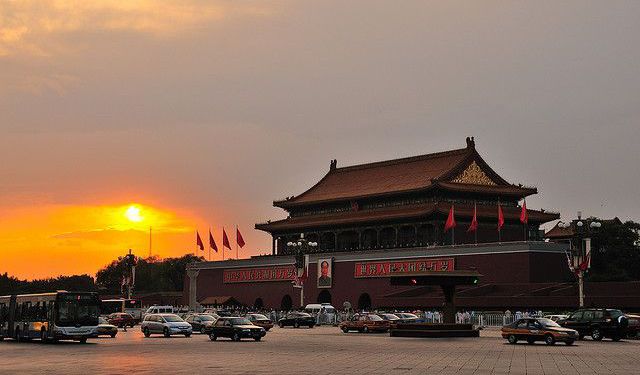 Image by dawvon on Flickr under Creative Commons License.

Xicheng District includes the largest part of the old city. In this part of Beijing, you will find fascinating Chinese architecture, the oldest standing Catholic Church and beautiful parks. Take the following tour to discover the most popular and prominent attractions in Xicheng District of Beijing.
How it works: Download the app "GPSmyCity: Walks in 1K+ Cities" from iTunes App Store or Google Play to your mobile phone or tablet. The app turns your mobile device into a personal tour guide and its built-in GPS navigation functions guide you from one tour stop to next. The app works offline, so no data plan is needed when traveling abroad.

White Cloud Temple was constructed in the 8th century to house the statue of Lao Tzu. This temple was originally known as the Tian Chang Temple. It was burnt down in 1202 but the statue was miraculously saved.

Reconstruction of the temple took place in 1224 under the order of Genghis Khan. The temple was then named the White Cloud Temple. Now it is one of the largest and oldest Taoist temples in China.

Taoist temples in China are not called temples but Guan which means observe. This is based on the Taoist belief that direct perception of nature and not theological or scholastic studies leads to understanding. Taoists visit this temple especially on full moon day.

Do not miss out the bridge that features the bells and the oversized Chinese coins. Purchase fake coins and throw them at the bells. If you hit the bell with a coin, you are considered to be lucky. White Cloud Temple is a must visit destination on your trip to Beijing.


Image by Gene Zhang on Wikimedia under Creative Commons License.
2

Capital Art Museum is located on Chang’an Street western extension from where it commenced operation in the year 2005. This museum is known for its advanced technology, abundant exhibits and magnificent architecture. This large contemporary museum is a major landmark in Beijing frequented by thousands of tourists every year.

Harmoniously integrating past and present, this museum displays the rich cultural heritage of the country through art. Capital Art Museum is also an example of contemporary and classical architectural integration with its massive roof and national characteristics.

The roof especially is a standing example of overhang design of traditional Chinese architectural style. The ancient China city wall is depicted by the long stone curtain wall and ancient dias construction style is reflected in the gradient of the square. In front of the hall’s north gate, you can find Danbi, a stone carved with images such as Phoenix and Dragon.

You will enter the hall through the decorative archway that reflects the Ming Dynasty style. You will certainly be impressed with the generous usage of timbers, bronze and stone in the interior of the museum.

You can find unearthed historical heritages and past year collections on display. Regular and temporary exhibitions are held here featuring fine contemporary and traditional artistic collections.

Why You Should Visit:
The permanent exhibitions include highlights such as the history of Beijing, old folk customs, Peking opera, bronze and porcelains... but there are also various changing exhibitions. All are fascinating, nicely displayed and not overwhelming. A great option for 2-3 hours.

Tip:
Free entry, but to be safe you do have to make an online reservation and bring your passport to get in.
Don't forget to bring your own food and drinks with you if planning to stay longer (some people eat in the seated corridors).

Emperors of the Ming and Qing Dynasties used to worship the constellation deities, especially the God of Moon on Autumn Equinox Day at the royal Temple of Moon. It was in 1955 that this temple was opened to the public as a leisure park.

Temple of Moon park is divided into two namely the south and north parks. At the north park, you can find several red brick ancient buildings with green roofs. Southern part of the park features rockeries, water, winding paths and lakes.

Moon altar is situated at the north park where you can also find other buildings such as Bell Tower, four halls, west and north gates and the four-quadrilateral pavilion. South Park is popular for its abundant natural beauty that includes bowery roads, artificial mountains and plenty of water.

This park is famous for the bonsai exhibition held throughout the year. You will find the Moon Goddess Chang’e sculpture at the pool where a waterfall drops. Beijing Children’s Hospital is located 250 meters from Nanlishi Road. This road is located to the south of the Temple of Moon.

Other popular attractions close to the Temple of Moon include the Baita Temple, Tianwang Hall, Dajue Hall, Qifo Hall, White Pagoda, Temple of Past Emperors and Guangii Temple.
Image by Dirrival on Wikimedia under Creative Commons License.
4

The main feature of the Miaoying Temple is the White Dagoba. There are four halls that contain historically important artefacts such as classical Buddhist scriptures, lifelike Buddhist statues, flowery cassocks, five Buddha’s crowns, fabrics and a lot of other valuables.

Visitors are impressed by the cm high golden Dagoba Longevity Statue studded with 40 rubies. Another important attraction here is the Kwan-Yin Bodhisattva Statue made in bronze. This statue has thousand eyes and hands. Dagoba temple is where a lot of Buddhist scriptures were translated.

During the Yuan Dynasty, this was the imperial temple. Three days ahead of the actual ritual, all ceremonies used to be rehearsed at this temple. During the Qing Dynasty, many temple fairs were held here.

To the north of the temple is the White Dagoba designed by Anigo, the famous Nepalese architect. The Dagoba is a standing example of friendship between China and Nepal that existed during Yuan Dynasty. Today, it is protected by the Chinese State Department. Miaoying Temple and the White Dagoba are sure to leave you speechless and spell bound.
Image by smartneddy on Wikimedia under Creative Commons License.
5

Guangji Temple was constructed during the Jin Dynasty between 1115 and 1234. Successive dynasties made certain additions to it and the present version of the temple was completed between 1368 and 1644 during the Ming Dynasty.

Constructed over an area of 5,766 acres, the temple stands in all its glory. Some of the major structures here include the main gate, Mahavira Hall, Heavenly King Hall, Sutra Hall and the Buddhisattva or Yuantong Hall.

Connecting walls joint the three arched doors at the main gate. You will find all the doors decorated with colored glazed eaves. As you pass through the gate, you will come across the imposing and majestic Bell Tower and Drum Tower.

Mahavira Hall is located in the second courtyard. Do not miss out the bronze vessel in front of the hall made in 1793 during Qing Dynasty’s Emperor Qianlong’s regime. This 2 meter high vessel features Buddhism’s eight treasures namely the wheel, umbrella, spiral shell, vase, flower, canopy, knot and fish.

Yuangtong Hall is the third courtyard where you will find Buddhisattva’s residence. At the Sutra Hall, the fourth courtyard, you can find a rich collection of treasures and sutras. Here again, do not miss the precious sutras written in blood from the Ming and Song dynasties.
Image by Smartneddy on Wikimedia under Creative Commons License.
6

One of the most ornate and grand churches in China, the Xishiku Cathedral is located in the Xicheng District. This Catholic Church affiliated to the Patriotic Catholic Church of China and is home to the Beijing Cardinal Bishop Office.

The Jesuits built this church in 1703 on a land near Zhongnanhai given to them by Qing Dynasty Emperor Kangzi. He gifted the Jesuits with the land in gratitude for treating and curing him of a serious illness. The plaque and calligraphic couplets you find on the door of the cathedral was written by the Emperor.

Emperor Guangxu wished to create a park at Zhongnanhai and moved the cathedral in 1887 to its present location. The park area went on to function as a residence of popular communists such as Zhou Enlai, Deng Xiaoping and Chairman Mao and is today the Chinese Communist Party headquarters.

Today the Xishiku Cathedral stands in all its glory with a rich marble façade. It was redesigned in Gothic style by Bishop Pierre Favier. When the cathedral was besieged by 10,000 boxers during the 1900 Boxer Uprising, Bishop Favier played a major role in successfully defending the church and over 3000 converts. Enjoy the grandeur and soak in the intrinsic essence of this popular Cathedral on your trip to Beijing.
Image by Gene Zhang on Flickr under Creative Commons License.