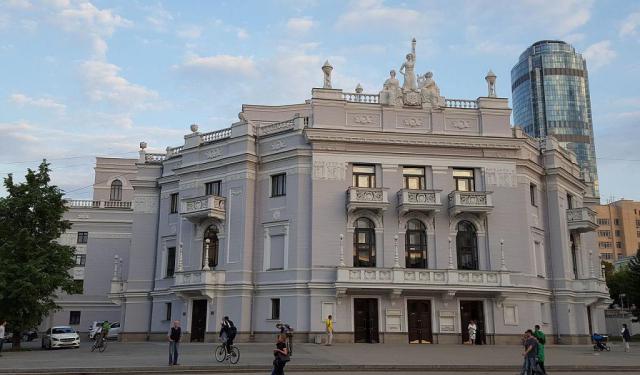 Image by Der.metzger2009 on Wikimedia under Creative Commons License.

Yekaterinburg is one of the largest centers of cultural life in Russia, after only Moscow and St. Petersburg. The city is home to many theaters, cinemas, libraries and concert halls. This tour will guide you to the finest cultural venues in Yekaterinburg and will teach you about the cultural heritage of the Urals.
How it works: Download the app "GPSmyCity: Walks in 1K+ Cities" from iTunes App Store or Google Play to your mobile phone or tablet. The app turns your mobile device into a personal tour guide and its built-in GPS navigation functions guide you from one tour stop to next. The app works offline, so no data plan is needed when traveling abroad.

Sverdlovsk Regional Universal Scientific Library, named after V.G. Belinsky, is the largest library in the Sverdlovsk region and is a well-respected cultural, educational and informational center. It opened on May 26, 1899, on the 51st anniversary of V. G. Belinsky's death. The library's collection currently exceeds 2 million items and includes books, microfiche, audio and videotapes, CD-ROMs and DVDs. Every year, the collection grows by 25,000 items, 1,500 of which are magazine and newspaper titles. A unique collection of manuscripts and historic books are stored in the library's department of rare books. The library also has the largest collection of foreign language publications in the Urals.
Image by Vladislav Falshivomonetchik on Wikimedia under Creative Commons License.
2

The Puppet Theater was founded on November 6th, 1932, as part of the Sverdlovsk Youth Theater. Its first show, "Letter from Italy", premiered on November 7, 1932. From 1996 to 1998, the building underwent a significant renovation with the help of architect Alexander Dolgov. An additional floor was added, making the theater a five-story building. Also, the stage was significantly enlarged and mechanized, and a small hall was added. There is now both a large and small hall that seat 280 and 100 spectators respectively. As part of the renovation, the interior of the theater was altered and a new logo, designed by artist A. Zolotukhin, was chosen. The performances of R. Vinderman, V. Garanin, M. Yaremchuk, A. Boraca, S. Plotov, I. Lifanov have garnered many awards at prestigious Russian and international theater festivals.
Image by Aevis on Wikimedia under Creative Commons License.
3

3) Opera and Ballet Theater (must see)

The Opera and Ballet Theater was established in 1912, and it remains a significant cultural venue in Yekaterinburg. It was built on Drovyanoy Square (now Paris Commune Square) on the former location of a wooden circus building, which had stood on the site since 1896. The facade of the Opera and Ballet Theater faces Lenin Avenue. Over the entrance there is an ornate balcony with balustrades and a sculpture of the three Muses. Inside, the auditorium is in the shape of a horseshoe. The theater (known in Soviet times as the Academic Opera and Ballet Theater of A. V. Lunacharsky) was designed by civil architect Vladimir Nikolaevich Semenov in a style similar to the Vienna and Odessa Opera Houses.
Image by Vladislav Falshivomonetchik on Wikimedia under Creative Commons License.
4

Founded in Sverdlovsk, the State Academic Musical Comedy Theater didn't change its name even after the city was renamed Yekaterinburg. Sverdlovsk Comedy is more than just a name, it is a creative brand, crafted by its legendary actors and directors of the past. Over the years, the theater has received multiple awards from the government, which has helped cement its fine reputation.
Image by Aevis on Wikimedia under Creative Commons License.
5

Salute is one of the oldest cinemas in Yekaterinburg. In 2001, Salute was the first cinema in Russia to show the movie "Moulin Rouge". It received permission from the film's director Baz Luhrmann to screen the film three weeks before its official premiere. In 2002, the Association of Russian filmmakers recognized Salute as the best regional cinema in the country. Today, Salute is a multiplex with six theaters that are equipped according to the highest modern standards. The total number of seats currently exceeds 900. In addition to showing commercial movies, it hosts regular festivals featuring international and independent movies.
Image by Fred on Wikimedia under Creative Commons License.
6

The State Academic Philharmonic is one of the best in Russia. On the opening day of the Philharmonic, the State Symphony Orchestra, under the direction of U.S. conductor Vladimir Savich, performed Tchaikovsky's "Sixth Symphony" and Respighi's "Pines of Rome". The latter was performed for the first time in the Soviet Union. The Philharmonic holds several music festivals throughout the year.
Image by Aevis on Wikimedia under Creative Commons License.
7

Cosmos is a cinema, as well as the main concert hall in Yekaterinburg. Cosmos was built in 1967 and seats 2,386 people, which was considered huge by the standards of the time. In 2003, a large-scale renovation project was carried out, which resulted in a completely redesigned exterior and interior. Also, the main hall was equipped with the latest technology. Cosmos hosts virtually every performance in Yekaterinburg by well-known international artists.
Image by Falshivomonetchik on Wikimedia under Creative Commons License.
8

Sverdlovsk State Academic Drama Theater was founded in Yekaterinburg in 1930. A milestone in the history of the theater was its 1974 Moscow Tour, where its performances of “Boris Godunov”, “Mindaugas” and “A Captive of Time” were highly appreciated by the critics. On October 2nd, 1980, the theater was awarded with the Red Banner of Labor by the Presidium of the Supreme USSR Council. The theater's repertoire has always included classical pieces, such as plays by Maxim Gorky, Tolstoy, Chekhov, E. De Filippo and William Shakespeare. Works by regional playwrights, such as D. N. Mamin-Sibiryak , A. Salynsky, B. Ocheretin, D. Medvedev, A. Grebneva, E. Verigo and N. Kalyada, have also been performed.
Image by Aevis on Wikimedia under Creative Commons License.