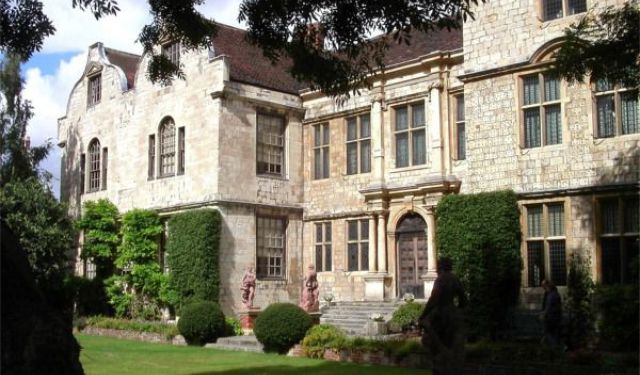 Image by Tom Pennington on Wikimedia under Creative Commons License.

Undoubtedly, York is the most haunted city in the UK. Meet phantoms of Roman soldiers at the Treasurer’s House. Drop in at the York Arms to see the nun's ghost looking for her baby. Solve the mystery of the vanishing ballet slippers at Thomas's Hotel. At Yorkshire Terrier, discover the ghost of the old gentleman who is watching for burglars. And finally, enjoy the art of intimidation at the York Dungeon!
How it works: Download the app "GPSmyCity: Walks in 1K+ Cities" from iTunes App Store or Google Play to your mobile phone or tablet. The app turns your mobile device into a personal tour guide and its built-in GPS navigation functions guide you from one tour stop to next. The app works offline, so no data plan is needed when traveling abroad.

In the care of the National Trust since 1930 (it was one of its first major properties), and tucked away behind the Minster, the Treasurer's House has both a lovely garden and fascinating collection of art and antiques.

The name derives from it being on the site of the medieval house of the Minster's Treasurer, a post abolished at the Reformation. The present building dates from the 17th century, but had been added to with various accretions and was actually three separate houses when in 1897 it was bought by Frank Green (1861-1954).

He was the son of wealthy Wakefield entrepreneurs and used his considerable wealth and educated taste to restore the house to what he thought it should look like in its heyday, albeit with a central great hall which was entirely of his own imagination.

He was an early collector of antiques, and his aim was not to deliver a home so much as a showcase for his collection of furniture, paintings and other treasures, with great attention to paid to the detail of their presentation. Each room was designed in the style of a different period, the better to show off the collection.

He was famously fastidious – not to say fussy – and the house abounds with notices telling the staff what to do and how to behave, and metal floor studs to indicate the exact position of the furniture. It is said he even wandered around to check on things at night! A bachelor, he gave the house to the Trust in 1930, while he moved on to Ashwick House in Somerset.

Visitors can wander on their own, and there is an audio guide available on request, as well as braille and large print guides. In each room, there is a separate guide to the paintings on display. Afterwards, the gardens (free entry) make a great place to escape the touristy bustle of the city.

Tip:
To reach the cellar and attic you need to go on an accompanied tour: the cellar tour is mainly of interest to ghost enthusiasts (there are still people who claim to see them!), while the attic tour gives a great insight into the servants' lives. You can also have a wander round the very pleasant, photogenic garden (the wall is wide enough for a person to climb and look down on it – a nice feature for a photographer) and go down in the basement to find a reasonably priced tearoom and toilets.


Image by Tom Pennington on Wikimedia under Creative Commons License.
2

Meet the ghost of the York Arms. It is thought to be that of a nun who gave birth, and for this sin was bricked up in the walls of the church, which had been located here earlier. Since then, the nun has been disturbing its visitors, wandering the pub in search of her baby. The pub, opened in 1860, got its name after the city's coat of arms, which consists of the red cross of St. George and the five gold lions of England.
Image by Steve Ford on Flickr under Creative Commons License.
3

Strange things happen at Thomas's Hotel. The furniture seems to move on its own. The attic is very cold, even in the summer and ghosts are thought to be wandering the staircases. Back in the 18th century, Thomas’s Hotel had been catering for the Theatre Royal. A pair of ballet slippers, which were displayed in a glass case on the wall have recently vanished. Since that moment, tales of its haunting have flourished.
Image by Dick Penn on Flickr under Creative Commons License.
4

Lendal Cellars, a 13th century building established by the Austin Friars, once housed a famous library of over 2,000 volumes. The strange apparitions periodically seen by pub patrons in the lower seating area are thought to be the ghosts of the friars. They are not known to be malicious and as soon as one turns his head and looks back, the ghostly images disappear.
Image by Henry de Carvalho on Flickr under Creative Commons License.
5

The Punch Bowl, a pub in Stonegate, is crowded with ghosts! The former owner of the pub who lost his life in a fire walks up and down the area where the cellar steps used to be. The grey ghost of a woman who met a tragic fate haunts the bar. Legend has it that she committed suicide after learning that her lover had been unfaithful. The Punch Bowl is also thought to be haunted by ghosts from its incarnation as a a brothel. A barmaid, who was beaten to death in the 16th century, is thought to be wandering the building to this day.
Image by eamoncurry123 on Flickr under Creative Commons License.
6

Ye Olde Starre Inn, York’s oldest pub, dates back to 1644 when it was used as a field hospital during England's Civil War. Don't be shocked when you hear screams coming from the cellar, they are the ghosts of those who died here, crying in pain. The ghost of a Royalist officer haunts the pub. His body is massive, his steps are heavy and his appearance is severe. The ghosts of two black cats follow him. The ghost of an old woman is sometimes seen walking the stairs, an apparition only children have seen.
Image by eamoncurry123 on Flickr under Creative Commons License.
7

The Golden Fleece is an inn which has a free house pub on the ground floor and four guest bedrooms above.

It was mentioned in the York City Archives as far back as 1503 and is rumoured to be haunted. The inn claims to be the most haunted public house in the City of York. The back yard of the inn is named "Peckitt's Yard" after John Peckett, who owned the premises as well as being Lord Mayor of York around 1702. His wife Lady Alice Peckett is said to haunt the pub, which was featured on Living TV's Most Haunted on 16 April 2005.

“Many guests have reported seeing the late Lady Peckett wandering the endless corridors and staircases in the wee, small hours and, including ghostly apparitions and moving furniture, hers is just one of the five resident spirits.”

It has a recognisable large golden fleece (dead sheep) hanging above the door.
Image by Son of Groucho on Flickr under Creative Commons License.
Sight description based on wikipedia
8

The York Dungeon depicts local horrible history using actor led shows, special effects and displays of models and objects. Opened in 1986, it was the second Dungeon attraction created, the first being the London Dungeon in 1974. Like the London Dungeon, it was designed as a live-action interactive horror show loosely based on factual events throughout history.

The dungeon operates on the basis of tours which start every 7 minutes and last between 1 and 1.5 hours. In these tours, visitors are led around a sequence of shows and exhibitions which are loosely based on historical events and practices.

Why You Should Visit:
Atmospheric and realistic. The actors are very good and the stories are entertaining. Some surprises and audience participation used well.
At the very least, you get an insight into some of the poor living and health conditions that folks had to put up with along with the barbarity of those in power.

Tip:
Pre-book online so you can turn up at your time and just go straight in; otherwise, risk being turned away or waiting in a lengthy queue.
Image by Kaly99 on Wikimedia under Creative Commons License.
Sight description based on wikipedia

Start your tour of York’s Old Town at the Museum Gardens. Walk along Shambles, a medieval street and see its narrow houses, pavements and its famous Snickelways. Climb the spiral staircase of Clifford's Tower for a great view of the town. Take this tour to experience the history of this very old city.

York’s city wall has remained intact since the Roman occupation. The city was named Eboracum by the Romans and referred to as Eoforvic by the Angles. To the Vikings, it was Jorvik and the Normans gave it the name York. Take this tour to discover the attractions along York's ancient city wall.