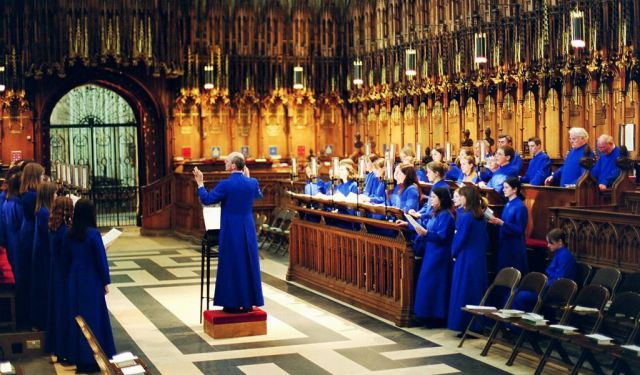 Today, the historic city of York – dominated by York Minster – teems with a variety of ancient churches, including 20 medieval ones that have survived, in whole or in part. 12 of them still hold services and can be visited. Here are some of York’s well- and lesser known religious sites deserving attention.

York Minster – the greatest Gothic cathedral in northern Europe, aged circa 800 years; the cathedral is open to the public and puts on a number of services each week as well as regular events.

Holy Trinity Church, Goodramgate – founded in the first half of the 12th century, is among the oldest churches in England; as close as you can get to how a church would have looked after the Reformation.

All Saints Pavement Church – easily noticed due to its striking octagonal 15th-century lantern tower, a long-time beacon for travelers in the Forest of Galtres; look for the 12th-century door knocker depicting the Mouth of Hell.

St. John's Church – a desecrated 12th-century church, now housing a bar called the Parish; one notable feature is the old bells, which are still occasionally rung.

All Saints Church – renowned for its impressive tower with an octagonal spire and a fine collection of original 14th-century stained glass (second only to that of York Minster).

To explore the surviving medieval churches of York and become acquainted with their magnificent sacred treasurers in more detail, take this self-guided walking tour.
Image Courtesy of Wikimedia and Allan Engelhardt.
How it works: Download the app "GPSmyCity: Walks in 1K+ Cities" from iTunes App Store or Google Play to your mobile phone or tablet. The app turns your mobile device into a personal tour guide and its built-in GPS navigation functions guide you from one tour stop to next. The app works offline, so no data plan is needed when traveling abroad.

The York Minister is an impressive cathedral with a long and storied history. The Romans settled here and named the area Eboracum in 71 AD. King Edwin was baptized in a small wooden church here in 625. A stone church was built, and King Edwin was buried in the stone church in 633. In 1088, a new Minister was built. The Minister was expanded between 1154 and 1225. In 1328, the York Minister hosted a royal wedding between King Edward III and Philippa of Hainault.

Richard Scrope, Archbishop of York, was accused of treason by Henry IV and beheaded in 1405. His tomb lies in the Minister.

The Minister as it stands today was completed in 1471. It is the second-largest Gothic cathedral in Northern Europe. The name "minister" harkens to Anglo-Saxon missionary churches. The cathedral's official name is the Cathedral and Metropolitical Church of Saint Peter in York.

The Minister features majestic architecture, including a Gothic nave and a Perpendicular Gothic quire. The 1408 Great East Window is the largest expanse of stained glass in the world. Each lancet in the magnificent Five Sisters Window is 53 feet tall. A gorgeous rose window graces the south transept. The design of the west window is known as The Heart of Yorkshire.

The transepts feature wooden roofs. The nave was completed in 1350 and is England's widest Gothic nave. The central tower is 235 feet tall (72 meters). The choir is 102 feet tall (31 meters). The octagonal Chapter House was built in 1280 and features wonderful stone carvings.

Visitors can view the remains of the Roman fort in the cathedral's museum.

The York Minister is one of the most impressive churches in Northern Europe. It was one of the few Catholic churches not destroyed by Henry VIII, as he wanted to convert it to an Anglican church. The soaring nave, impressive towers, storied history, and Gothic architecture are the highlight of any York visit.

Go for an evensong service, usually held in the evenings at 5:15 pm, and experience the acoustic wonders of the choir and organ.

Secluded behind rows of old buildings, accessed by narrow alleyways, is the Holy Trinity Church, Goodramgate. The church was founded in the first half of the 12th century, although its architecture is more representative of the later centuries: the southeast chapel was added in the 13th century, and the south aisle and arcade in the 14th.

The stained glass over the altar was a gift of John Walker, dating back to 1470-1480, a rare date in York glass. The woodwork and pews are from the 17th-18th centuries.

The church was enlarged in 1823 when the north side was rebuilt. The south porch was added in 1849. The condition of the building had seriously deteriorated by 1882 and regular worship was suspended for over 50 years until 1937, when restoration work was completed. The oak rafters were renewed and the roof was restored. The pier supporting the arches between the nave and north aisle were underpinned with concrete, and the decaying stonework on the south aisle walls was renewed.

Why You Should Visit:
Absolutely gorgeous, free to enter, and a great way to take a pause and breath in the middle of your busy day.
This is about as close as you can get to how a church would have looked after the Reformation: dark, quiet, homely, with uneven floors, high box pews and plain walls.

Tip:
A cold, cloudy day does not make for ideal conditions in which to visit Holy Trinity, so check out this site when it's warmer... and bring your lunch to eat in the small but beautiful garden.

Much of the All Saints Pavement Church was built in the 14th and 15th centuries.

Its most prominent feature is the octagonal lantern-tower from 1400, which had been a beacon for travelers for many years. It boasts a hexagonal pulpit from 1634, and several fittings from St. Saviour and St. Crux, whose parishes, among others, were united with it. Most notable additions are the 15th-century west window with scenes from the life of Christ, the east windows by Kempe, and the 12th century 'doom' knocker on the north door.

The chancel was demolished in 1780 and the east end was rebuilt in the course of the 1887 restoration, by George Edmund Street, when the stonework was cleaned, the pinnacles restored, and the central east window fitted with stained glass by Charles Eamer Kempe. Previously, the north wall and the west end were rebuilt in 1834, and the lantern – in 1837. The vestry was added between 1850 and 1855.

Despite all these modifications, the remains of the medieval chancel-arch can still be seen above the east window inside the church.

Nowadays the All Saints Pavement Church is the guild and civic church for the city of York, and the regimental church for the Royal Dragoon Guards.
Image Courtesy of Wikimedia and Chris06.
Sight description based on Wikipedia.
4

The earliest parts of St. John’s Church, including the tower base, date back to the 12th century, while the chancel was built in the 14th. Much of the rest of the building appeared in the 15th century, when the north aisle and arcade were rebuilt, and the west end extended.

In 1551, the tower collapsed and part of the north aisle had to be remodeled. The church was further reconstructed in 1850 by George Fowler Jones, when the south porch was added, and the east end was rebuilt to make space for widened North Street. Some extensive restoration – such as re-glazed windows, a new floor laid, and new pews added – also took place during that period. In 1866 the nave was re-roofed.

The church closed in 1934 and became the Institute of Architecture of the York Academic Trust, which merged with the University of York. The university used it as the Arts Centre in the 1960s, but it was subsequently sold and now houses a bar called the Parish. One notable feature is its old church bells, which are still occasionally rung.
Image Courtesy of Flickr and grassrootsgroundswell.
Sight description based on Wikipedia.
5

Located near the Ouse River, next to a row of 15th-century timber-framed houses, is the church boasting an impressive tower with an octagonal spire. Known as the All Saints Church, it was founded in the 11th century, though much of the current building appeared much later. The earliest part of the nave is from the 12th century, the arcades date from the 13th century, and the east end was rebuilt in the 14th century, when the chancel chapels were added.

The land on which the church stands was reputedly donated by Ralph de Paganel, a Norman tenant-in-chief, whose name is commemorated in the Yorkshire village of Hooton Pagnell.

The church was extensively restored between 1866 and 1867, seeing the new south aisle wall, a porch and a vestry added, half of the roof replaced, and new seating and organ provided. The chancel screen was installed in 1906, designed by Edwin Ridsdale Tate, who also rebuilt the 15th-century anchorite house in 1910.

The church is particularly noted for one of the finest collections of medieval glass in York, mostly dating from the early 14th century. Perhaps the most famous of it is the depiction of the Prick of Conscience, dating from circa 1410, which illustrates the 15 Signs of Armageddon. Another famous window is The Corporal Acts of Mercy. It depicts the Blackburn family of influential traders, specifically Nicholas Blackburn, the then mayor of York, who is said to have paid for the window.