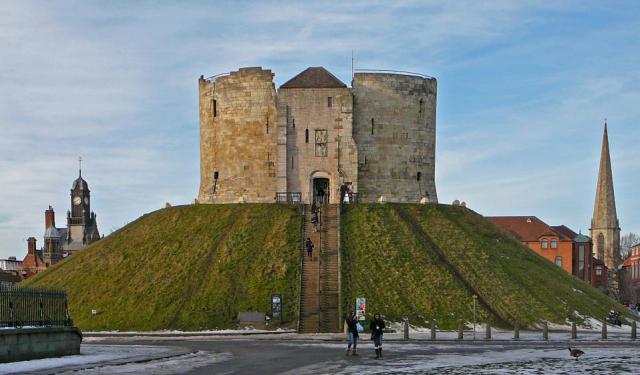 Image by Mattana on Wikimedia under Creative Commons License.

Continue your acquaintance with York’s medieval churches, beginning with St. Helen's Church. Then visit St. Martin le Grand Church and many other fine old houses of worship. Take this tour to see more of York’s beautiful churches!
How it works: Download the app "GPSmyCity: Walks in 1K+ Cities" from iTunes App Store or Google Play to your mobile phone or tablet. The app turns your mobile device into a personal tour guide and its built-in GPS navigation functions guide you from one tour stop to next. The app works offline, so no data plan is needed when traveling abroad.

St. Helen's Church stands out with its unique octagonal tower. The earliest evidence of St. Helen's Church is from the late 12th century, though it is possible to say that its foundation was laid earlier. It was rebuilt twice, in the 1550s and the 1850s. The tower was erected in 1814 and the chancel in 1858. It has a gorgeous interior with 14th and 15th century stained glass.
Image by Neil T on Flickr under Creative Commons License.
2

Often referred to as St. Martin le Grand, a title coined in the 1830s, St. Martin’s Church’s earliest masonry is from 1080, though it is thought to be older. Largely destroyed in a bombing raid in 1942, the 15th century tower and south aisle remain and a new vestry and parish room were added. The 1437 St. Martin window removed before the raid for safety is the largest medieval window in York outside the Minster. Its restoration by architect George Gaze Pace, completed in 1968, is considered one of the most successful post-war church restorations in the country, successfully blending the surviving 15th century remains with contemporary elements. This church is famous for its prominent clock, from 1778, that overhangs the street, topped by the figure of a naval officer.
Image by RachelH on Flickr under Creative Commons License.
Sight description based on wikipedia
3

St. Michael's Spurriergate Church is now housed in the Spurriergate Centre, opened in 1989. The original church dates back to the Norman conquest. The slim pillars holding up the roof are nine centuries old and the oldest part of the church. The church took its name from the spur-making tradesmen who occupied this street in the 15th century. The original tower has been lowered, and in 1821 the east wall of the church was rebuilt in order to widen the street.
Image by Tim Green aka atoach on Flickr under Creative Commons License.
4

Much of the All Saints Pavement Church was built in the 14th and 15th centuries. The east end, designed by George Edmund Street, was rebuilt in 1887, but the remains of the medieval chancel-arch can still be seen above the east window inside the church. Its most prominent feature is the octagonal lantern-tower from 1400, which had been a beacon for travelers for many years. It boasts a hexagonal pulpit from 1634, and several fittings from St. Saviour and St. Crux, whose parishes, among others, were united with it. Most notable additions are the 15th century west window with scenes from the life of Christ, the east windows by Kempe and the 12th century 'doom' knocker on the north door.
Image by RachelH on Flickr under Creative Commons License.
Sight description based on wikipedia
5

The earliest parts of St. John’s Church, including the tower base, date back to the 12th century. Much of the current building was built in the 15th century. The east end was rebuilt in the middle of the 19th in order to widen North Street, and some extensive restoration was also performed during that period. The church closed in 1934 and became the Institute of Architecture of the York Academic Trust, which merged with the University of York. The university used it as the Arts Centre in the 1960s, but it was subsequently sold and now houses a bar called the Parish. One notable feature is its old church bells, which are still occasionally rung.
Image by xacta2a on Flickr under Creative Commons License.
Sight description based on wikipedia
6

All Saints Church was founded in the 11th century, though most of the present building is from the 14th and 15th centuries. The land on which it was erected was reputedly donated by Ralph de Paganel, a Norman tenant-in-chief whose name is commemorated in the Yorkshire village of Hooton Pagnell.

Located near the Ouse River, next to a row of 15th century timber-framed houses, its main feature is an impressive tower with an octagonal spire. The church is also noted as containing the finest collection of medieval glass in York except that of York Minster, mostly dating from the early 14th century. Perhaps the most famous is that depicting the Prick of Conscience dating from circa 1410 which depicts the fifteen signs of Armageddon.


Image by Michael Jagger on Wikimedia under Creative Commons License.
Sight description based on wikipedia
7

St. Martin-cum-Gregory Church is one York’s oldest medieval churches. It was mentioned in Domesday Book, which is a record of the great survey held in the time of William the Conqueror. Much of the present building was constructed the 14th and 15th centuries. Its most recent addition was the brick tower, built in 1844.
Image by Gordon Hatton under Creative Commons License.
8

St. Mary's Church Bishophill Junior is considered the oldest church within the city walls of York. The site of the church is supposedly the place where the civil quarter of the Roman garrison of Eboracum was settled. The elements of Roman stonework, found in the tower of the church, is evidence of this. There are also fragments of pre-Conquest stonework inside this church. Adjacent to this site there was formerly St Mary Bishophill Senior, with early Anglo-Saxon features such as monolithic construction, on the base of a Romano-British wall which could possibly also have been a church. There is now no trace of this, although it was reported to stand as a ruin in 1961.
Image by Pabloj on Wikimedia under Creative Commons License.
Sight description based on wikipedia

Start this tour with Woodcarvers of the Shambles and visit Mulberry Hall to see its exclusive collection of fine china, crystal, cutlery and cookware. Drop in at Bettys Café Tea Rooms and try the famous Yorkshire tea. Be sure to see Christmas Angels, the York Minster Shop and other great shops in this tour.

Begin your tour at Stonegate Teddy Bears and Tea Rooms. Acquire a teddy bear friend and enjoy a cup of wonderful Yorkshire tea. Go to the Wild Hart and buy a Country Heart for someone special. Other attractions include the Cat Gallery and the Printer’s Devil. Follow this guide to see the wonderful sites the Stonegate area has to offer.

Start your tour of York’s museums at York Castle. See Kirkgate and enjoy the elegance of the Fairfax House. Be a guest in a Viking village and be sure to stop at the Yorkshire Museum to see its Roman and medieval exhibitions. Discover the city's recent history at the National Railway Museum, the largest railway museum in the world. Take this tour to become acquainted with York’s colorful...  view more