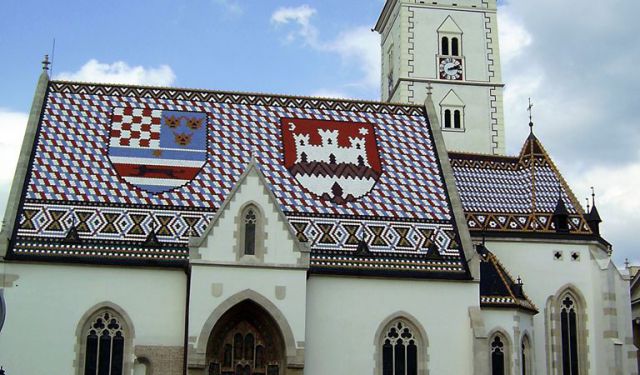 Image by Roberat on Flickr under Creative Commons License.

Zagreb has many religious buildings well known, not only in Croatia, but further afield. Many of them are important architectural monuments. Almost all of them have been restored after being damaged by natural calamities, with their beauty and style carefully preserved. Take this tour to discover the most beautiful churches in Zagreb.
How it works: Download the app "GPSmyCity: Walks in 1K+ Cities" from iTunes App Store or Google Play to your mobile phone or tablet. The app turns your mobile device into a personal tour guide and its built-in GPS navigation functions guide you from one tour stop to next. The app works offline, so no data plan is needed when traveling abroad.

St. Mark's Church is a parish church in old Zagreb. The Romanesque window on its south facade, much as the semicircular ground-plan of St. Mary's chapel, suggest that the church must have been built as early as the 13th century. In the second half of the 14th century it was radically reconstructed and turned into a late Gothic-style church of the three-nave type. The Gothic composition of the portal consists of fifteen effigies placed in eleven shallow niches. On top are the statues of Joseph and Mary with the infant Jesus, and below them one can see St. Mark and the Lion; the Twelve Apostles are placed on both sides of the portal (four wooden statues replaced the original ones which had been destroyed). In its artistic composition and the number of statues, this portal is the richest and the most valuable Gothic portal in South Eastern Europe.

Why You Should Visit: This iconic little church is one of Zagreb's most popular and endearing symbols! The tiled roof sparkles and shines in the sunlight.

Image by espinr on Flickr under Creative Commons License.
2

Kamenita Vrata or The Stone Gate is one of the most important historical sights situated in Upper Town, part of the old city walls. It is believed that Kamenita Vrata was built in the 13th century.

During its long history, Zagreb underwent many reconstructions and was devastated more than once. In May 1731 a fire destroyed much of the old city, burning all the houses to the ground. At that time the Gates displayed a painting of the Virgin Mary holding baby Jesus, which was miraculously undamaged by the flames. To commemorate the event, grateful citizens built a chapel within the arch of the old Stone Gate. The chapel, which still houses the painting of Virgin Mary holding baby Jesus, has since become Zagreb’s most popular shrine and is regularly visited by local people who come to light a candle and thank Virgin Mary for protecting them.

Why You Should Visit: Kamenita Vrata is one of the most important historical sights in Zagreb and a definite must-see for everyone.

Image by Ex13 on Wikimedia under Creative Commons License.
3

The Church of St Catherine is the first Baroque church in Zagreb, located in the square of the same name. Before the St. Catherine's was built, a 14th-century Dominican church occupied the area. When the Jesuits arrived in Zagreb in the early 17th century, they thought the original church too rundown and inadequate, and worked to build a new church. Construction began in 1620 and was completed in 1632. A monastery was built adjacent to the church, but now the spot is home to the Klovićevi dvori art gallery. St. Catherine's church was victim to fire twice in history: once in 1645 and again in 1674, devastating the interior. The church was refurnished with help from wealthy Croatian nobles, and in return, they were allowed to display their family coat-of-arms or have the honour to be buried or entombed in the church. Inside the church there are some Baroque-style sculptures and paintings. The building has sustained damage throughout centuries, caused primarily by earthquakes; its exterior has largely remained intact, though. Near the church is located a gymnasium and a monastery that has now been transformed into a museum.
Image by Suradnik13 on Wikimedia under Creative Commons License.
Sight description based on wikipedia
4

The Church of St. Mary was built in the 16th century on the site of a 13th century church of the same name. In the 18th century it expanded and obtained a Gothic appearance. Its altar and frescoes have been painted by Slovenian artists.
Image by Oliver-Bonjoch on Wikimedia under Creative Commons License.
5

Zagreb Cathedral is the most important and famous religious edifice in the city. Its construction was started in the 11th century, but was not finished because of wars and other reasons. Its present neo-Gothic facade appeared in the 18th century. Wood was largely used in the cathedral's construction and the scent of old wood is felt inside even today. Part of the interior are the stained-glass windows depicting biblical events. Also, there are a Baroque altar and several paintings and sculptures featuring the Assumption of Virgin Mary.

Why You Should Visit: One of the city's main landmarks; an impressive building located in Zagreb's city center.
Image by lostajy on Flickr under Creative Commons License.
6

The Church of St Francis Assisi or Crkva Sv. Franje Asiškog dates back to the 13th century. It is considered to be one of the best Franciscan buildings in Central Europe. Being dedicated to St. Francis, the church has the altar and many paintings and sculptures inside featuring the saint. Following a renovation after a powerful earthquake, the church has got a Neo-Gothic interior.
Image by monroet21 on Flickr under Creative Commons License.