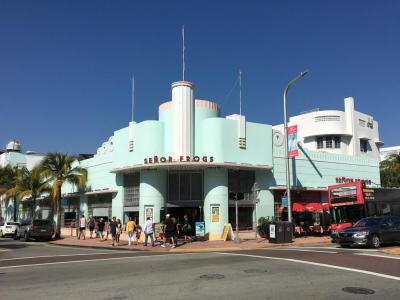 Designed by Henry Hohauser in 1939, this art deco gem has a distinctive Streamline Moderne style with its sleek, splendidly curved facade and six decorative porthole windows. Hohauser is credited as one of the principal architects behind the art deco styling of South Beach.

It was originally opened business as Hoffman’s Cafeteria before hosting a few other tenants over the years, such as the China Club and Ovo, before became the Warsaw Ballroom, the famed gay bars that inspired the 1996 Hollywood movie, The Birdcase. Today, this iconic art deco building hosts probably the world’s most glamorous Senor Frogs, a Mexican-theme franchised "infamous party scene" bar and grill.
Image by Phillip Pessar on Flickr under Creative Commons License.