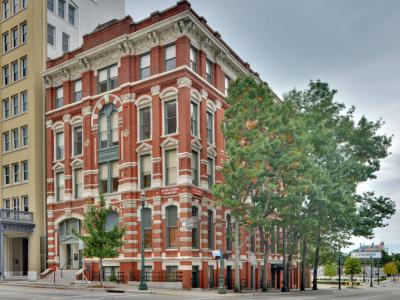 Cotton ruled as king in Houston throughout the 19th century and well into the 20th century. Prominent leaders in the business community were largely cotton factors, and many of these were involved in other important fields, such as banking and railroading. In 1974 the local cotton industry decided to organize the Houston Cotton Exchange and Board of Trade. It was so successful that nine years later officials began to plan a large handsome building as its headquarters.

Completed in 1885 to a Victorian Renaissance Revival design, the building became a center for business and civic events at its peak. It was enlarged to four floors and remodeled in 1907, but that still proved to be insufficient, with the Exchange eventually moving to a new, even larger location at 1300 Prairie St. In 1973, the original building underwent a massive restoration that received national recognition. One of the first in Houston to be listed on the National Register of Historic Places, it was also designated a Texas Historic Landmark by the state's Historical Commission.

Tip:
The Wine & Whisky bar on site has great service and a very beautiful historic atmosphere.
Image by Ed Uthman on Wikimedia under Creative Commons License.