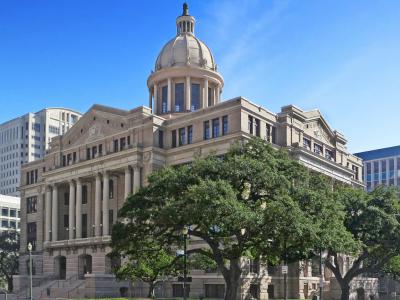 This former civil courthouse – the fifth in a series of courthouses to occupy the site – has come a long way since 1910, when Harris County had 150,000 residents. Imagine, if you will, a life without air-conditioning, with ventilation provided by open windows, hand-held fans and oscillating fans. Even so, many people sat in balconies to watch trials for entertainment as there were no televised shows, no video games, and no movie theaters. Water troughs were placed on the street in front of the building to give relief to the horses that had to wait outside all day while their owners tried cases or sat as jurors.

One of the last – and best – courthouses of that era, the Harris County Courthouse was rededicated in 2011, after workers painstakingly restored the structure to its original appearance, down to the plaster on the walls and mosaic tile on the floor (the latter makes use of the same color and style, but is laid out in a different pattern for each floor level). Stairs that led to the main entrances on the 2nd floor have been rebuilt, along with balconies over the showpiece 3rd-floor courtrooms. Topping off the rotunda is a new shallow-domed stained glass skylight with brilliant colorful hues.

At the entrance, tell the security staff that you are there to admire the building interior, and they will give you a little pamphlet further describing the restoration process – a marvel of historic preservation.