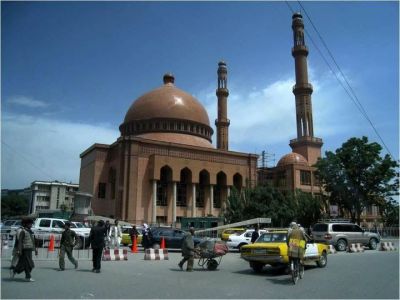 Abdul Rahman Mosque is one of the most recently constructed mosques in Afghanistan. It was privately financed by a well-known and respected entrepreneur, Haji Abdul Rahman, after whom the mosque was subsequently named. It was his lifelong dream and last wish to build a mosque. He lived to see the works begin, but passed away in 2002. The mosque bearing his name was opened for religious services 10 years later, a couple of weeks before the month of Ramadan. Ghulam Farooq, a renowned and very talented Afghan engineer, worked on the design of the building. The mosque has three prayer halls on different floors, a big learning center and an open terrace, and can serve up to 10,000 people at a time. The mosque features 20 domes, each having a hand-made brass chandelier with hundreds of light bulbs illuminating the rooms. The largest dome is above the main prayer hall. It is majestic and has a golden finish on the exterior, 44 arched windows around it, and Quran verses in elegant Islamic lettering decorating its interior. Abdul Rahman Mosque is a stunning work of art and a definite must-see.
Image Courtesy of Haseebullah Khan.