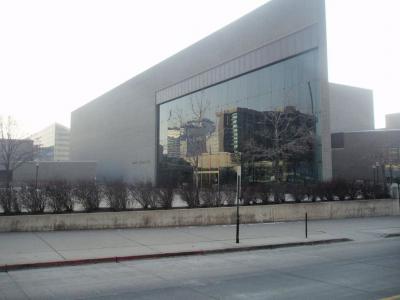 Abravanel Hall is a concert hall that is home to the Utah Symphony and Opera and is part of the Salt Lake County Center for the Arts. The hall is an architectural landmark in the city and is adjacent to Temple Square and the Salt Palace on South Temple Street. Abravanel Hall first opened in September 1979 and was originally known as Symphony Hall. It was renamed in May 1993 for Maurice Abravanel, conductor of the Utah Symphony. The hall is actually a concrete building within a brick building and was designed by Dr. Cyril M. Harris to provide an environment of acoustic excellence. The hall is rectangular in shape, similar to some of the world's finest symphony halls, such as Grosser Musikvereinssaal in Vienna, Concertgebouw in Amsterdam, and Symphony Hall in Boston.
Image by Ntsimp on Wikimedia under Creative Commons License.
Sight description based on wikipedia