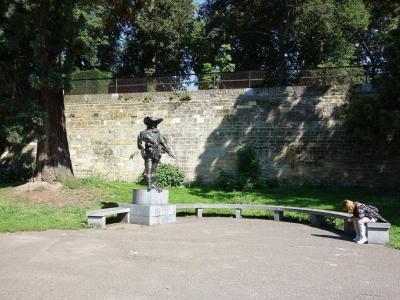 Aldenhofpark is one of the most famous parks in the city. It was founded in 1918 and designed by Pierre Lieven Rosseels. The park is a former bear pit. When you cross the River Jeker you will notice a bronze sculpture of bear sitting on a bench. The other notable monument is De troostmachine (The Consolations Machine), a piece by Michel Huisman, which was completed in 2001. The sculpture consists of a young woman caressing the head of a dead giraffe. The park is also famous for the statue of the legendary D’Artagnan who died in 1673 in Maastricht. “One for all, all for one” is written on the pedestal. The eyes of the Musketeer, who is drawing his sword, speak of firmness. The statue is a tribute to a noble man's courage, as he remained true to his king and comrades.
Image by Mark Ahsmann on Wikimedia under Creative Commons License.