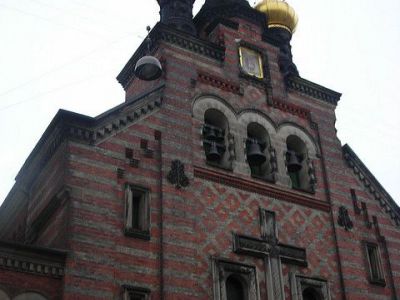 Built by the Russian government, Alexander Nevsky Church holds the distinction of being the only one of its kind in Copenhagen. This Russian Orthodox Church was constructed between 1881 and 1883 to commemorate the wedding of Alexander Alexandrovich and Princess Dagmar of Denmark and is dedicated to Alexander Nevsky, the Russian patron saint.

The Church was consecrated by Chancellor of the Theological Academy in St. Petersburg, Provost Janysev in 1883. He was assisted by a monk from St. Petersburg based Alexander Nevsky Lavra and by the priest of the congregation. The ceremony was attended by Greek, Russian and Danish royal families.

From outside, you will find this impressive church designed in 17th century Muscovite architectural style. You will find three prominent onion domes dominating the building. These street facing domes are on top of the gable.

Highlight of the grey and red brick facade are the ornamentations in sandstone. Do not miss out the patron saint Alexander Nevsky’s statue above the bells standing high on the facade.
Image by rwhgould on Flickr under Creative Commons License.