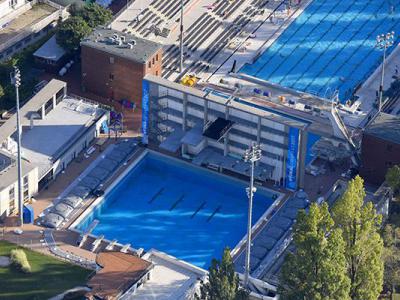 With its ten lanes and overall length of 50 meters, this world-class swimming complex that hosted the European Aquatics Championships in 2006 and 2010 features state-of-the-art diving platforms, two fitness rooms, and a sauna, and can accommodate up to 8,000 spectators. As you tour the building, take note of all the plaques that adorn the walls with the names of winning athletes that have trained here over the years.

The swimming pool complex is named after Alfred Hajós – born Arnold Guttmann – who felt compelled to become a good swimmer at the age of 13, after watching his father drown in the Danube. Later, he took the name Hajós ("sailor" in Hungarian) for his athletic career and, aged only 18 years, went on to win two gold medals in the Athens Olympics and many championships thereafter.

The place is never crowded so much to feel uncomfortable, so if you'd like to enjoy the island and swim not having other people's foot in your mouth, give this place a visit. It also has terraces for a relaxing sunbath, a sufficient number of toilets, and is good value for money on the whole (note that tickets are discounted by half between 10am and 1pm on weekdays).

Tip:
Check the availability of pools before arrival, given trainings and/or matches of water polo teams. For those with an interest in polo, this is certainly the best spot to catch a match of the "almost national" sport.
Image Courtesy of Wikimedia and Civertan.